In the past I’ve gone into the site database and generated some charts showing how much writing I did in the preceding year and what form it took. This is the third such post, which means I guess it’s a tradition now.

I was planning on doing this way back in January, but then it slipped my mind for 8 months. Oops.

Well, we’re overdue. I have a few announcements about upcoming content changes, and these charts will help illustrate the rationale behind these changes.

We kicked off 2018 with that hosting nightmare, which put a dent in the content flow for a couple of weeks. Once things returned to normal, I published the final few weeks of my Borderlands retrospective. We also brought back the Diecast after a 10-month hiatus. Wolfenstein ran until April. Then I spent a month bitching about Black Desert Online for some reason. I spent June talking about E3 2018. After that I launched my Grand Theft Auto retrospective, which was followed by Mass Effect Andromeda. Andromeda actually overlapped with the start of Spider-Man, which is due to wrap up in 2 weeks. I also published a total of 35 columns. For the last half of the year, I was posting two retrospectives and a column every week.

I returned to writing Experienced Points columns in August. My goal was to create material for the Escapist without reducing my output here on the blog. How did that work out? The charts below have the answers.

As a reminder of how this works: WordPress doesn’t have a wordcount feature. So to get the number of words I write in a year, I get a character count and divide by 6.6Based on random sampling, I’ve concluded that I average 6.6 letters per word on this site.. These charts only include my material, and not any of my distinguished guests. These charts are based on calendar years, not financial years or anything crazy like that. Read the original post if you want all the details.

Anyway, here is the count of total words per year:

Ouch. Despite my best efforts, it appears that my Escapist gig did somewhat cannibalize the blog. Maybe this explains the slow drop-off in Patreon support over the last 6 months or so?

The 2016 numbers were inflated by my re-posting of my World of Warcraft and Lord of the Rings series.

One of the problems with my usual format is that my site is very good at entertaining people once they’re here, but I have no way to attract new readers. My hope for the Escapist column was that it would bring fresh readers to the blog. That didn’t really happen as much as I’d hoped. I got a small handful, but on the whole the Escapist readers were not eager to follow links to my site. Instead of growing the audience, it seemed to perhaps shrink a bit. The Escapist gig brought in some income, but a lot of that income was offset by the drop in Patreon backers. I was doing a lot more work but barely making more money, while also losing readers and putting less material on my site. So that was pretty much a disaster all around.

It didn’t seem like a disaster at the time. In fact, I sort of assumed everything was fine. These changes were gradual enough that I didn’t see the pattern. I was working hard, which is usually a pretty good indicator of success for me. It wasn’t until a few weeks ago that I ran the numbers and realized I was experiencing a very slow downward spiral.

I’ve put the Escapist column on hiatus. We’re still on good terms and the door is open for me to return later if it makes sense. In the meantime, I feel like I need to focus on the blog and keep my core audience happy. 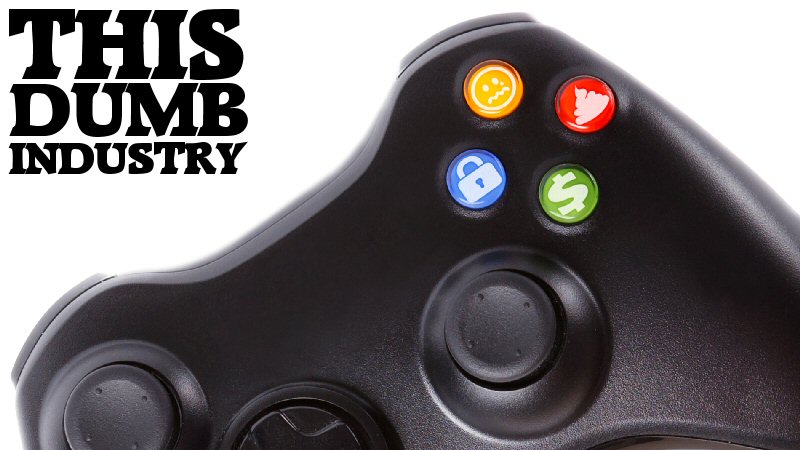 I have a project in the pipeline. I’m going to bring back my This Dumb Industry columns, but also release it concurrently with a video of the same material. Hopefully this will enable me to return the blog to its 2017 glory while also giving me a way to bring in new readers.

I have a secondary motive for the video, which is that it will make for an educational experience for my son IssacHe also edits the podcast. He’s about to  turn 18, if you’re curious.. Video editing is a good job skill in a growing field. Wordsmiths like me have been sad about the fall of blogs and the rise of YouTube, but it’s good for people who work in video.

I’ll write the column, he’ll edit the video, and we’ll see how it goes. I’ll have more about this in a few weeks. The current plan is to re-launch the column / video in September.

Anyway, back to the charts… 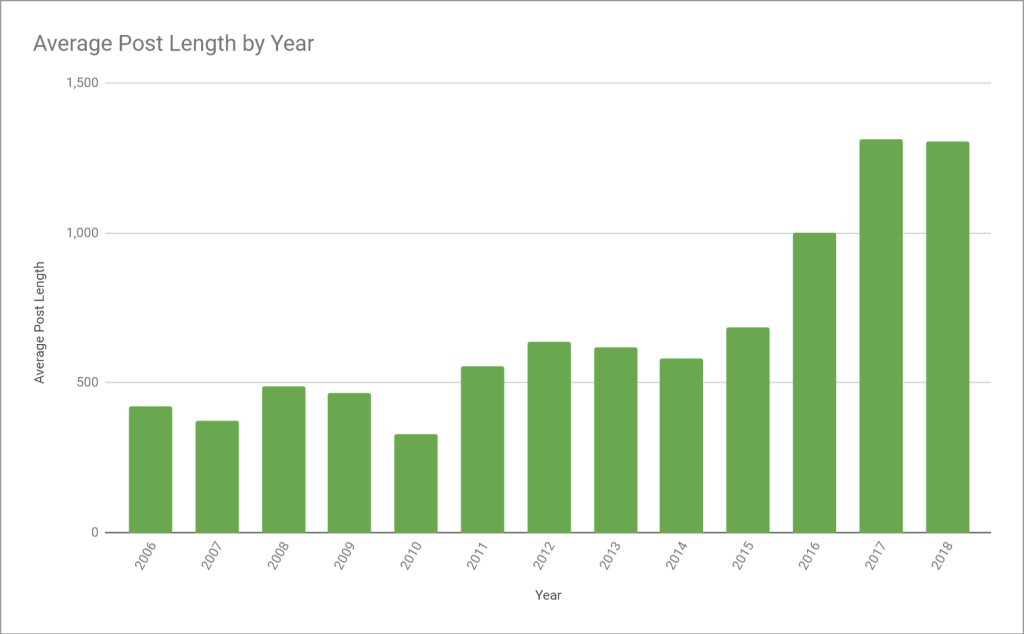 Post length isn’t a terribly important metric for the site, so this is mostly a curiosity. The re-launch of the podcast probably dragged this number down a bit, since those posts are always pretty short. For the record, my long-form retrospective posts aim for a word length of 1,500 to 2,500. My posts linking to the Escapist column were usually 800 to 1,000. The typical Diecast post might weigh in at 300 or so.

Holding steady. That’s fine. As I’ve said before, the drop from 2016 to 2017 is due to Spoiler Warning moving off-site and no longer generating 3 posts a week.

Huh. That’s kind of surprising. Like I said in years past, I don’t have anything against coarse language. I’m just wary of getting a reputation for being, “That angry guy who’s always bitching about everything.” You can spend 2,000 words being analytical, but if you spike the article with phrases like “shitty gameplay” and “fucking ludicrous plot construction” then you’ll be accused of doing outrage as performance art and get dismissed as a crank.

Here are some charts I’ve never posted before…

You can see why I’m worried about audience retention. While comment count isn’t a full measure of audience size and engagement, it’s certainly a major indicator. According to this, we’re at a 10 year low. That’s mildly alarming.

We lost a few of our most prolific commenters in 2018In particular, Damien Lucifer vanished. He’d been around since 2007, and he made a lot of comments. I hope he just got sick of the site and isn’t, you know… not okay.. I’m not sure why those people left. We can’t blame the entire drop in engagement on this, but it’s certainly a contributing factor.

I’m not sure why comments dropped off like this. Maybe I wasn’t putting up enough material. Maybe the material was fine but it wasn’t interesting or controversial enough to generate discussion. Maybe my material was so brilliant and flawless that there was nothing for anyone to add or disagree withSince we don’t have any data, I’ll just go ahead and assume this one is true.?

Above is the count of all non-Shamus posts, by year. I expect this will jump up for 2019, since we have Bob Case and Paul Spooner putting up content.

Here we can see the site broken down into distinct eras. At the start we have the blue bars marking the DM of the Rings. Then the huge red bars show the Spoiler Warning era from 2010 to 2017. And now we have the green sections where the site is currently focused on long-form retrospectives.

The orange bars (programming) are pretty evenly distributed over the entire history of the site. For fans of programming content, I’m happy to announce some upcoming posts on programming theory. They’re going to start once the Spider-Man series ends, and they’ll run until nearly the end of the year.

Some other fun facts about the site:

So that’s how 2018 turned out. I’ll have more on the return of This Dumb Industry as the project comes together. If you have any suggestions or comments on what you’ve been missing on the site or what things you’d like to see return, please tell me about it.

[1] Based on random sampling, I’ve concluded that I average 6.6 letters per word on this site.

[3] In particular, Damien Lucifer vanished. He’d been around since 2007, and he made a lot of comments. I hope he just got sick of the site and isn’t, you know… not okay.

[4] Since we don’t have any data, I’ll just go ahead and assume this one is true.

 Thirteen Years of Twenty SidedPrevious Post
Next PostDing 48! 
From The Archives:

Game at the Bottom

Why spend millions on visuals that are just a distraction from the REAL game of hotbar-watching?