Right up front, I admit that this is a terrible idea for a series. Judging by the comments, the audience of this blog typically majors in RPGs with a minor in Dark Souls. In terms of audience priorities, action shooters fall somewhere below “2D side-scrolling pixel art indie games” and random complaints about keyboards.

Moreover, this game is fairly new, and my Spider-Man series demonstrated that the audience prefers to read retrospectives about games that are a couple of years old. Even in the wider gaming culture, this game didn’t seem to resonate with people. It vanished shortly after release and nobody had much to say about it.

So why am I doing a retrospective on a poorly-reviewed game that people don’t care about that my audience cares about even less and would be too new to be of interest even if they were interested? I don’t know. I think this must be self-sabotage on my part. The years of imposter syndrome have taken their toll and now I’m trying to get rid of my audience so I can go back to working fast food.

Actually, I’m probably writing about this for the same reason I wrote about all those other games: I just can’t help myself. Rage 2 is filled with really interesting problems that compel me to look closer. I want to discuss these flaws (and complain about them, obviously) and talk about why they matter. In my Spider-Man series, I said the story was mostly good and occasionally brilliant, but with a couple of moments of perplexing awfulness. Rage 2 is the inverse of this. The story is mostly dross, occasionally awful, but with a few brief moments of perplexing excellence. How can a setup like that not make you a little curious about the development process?

In Case You Missed it

Shoot people and take their stuff in the name of wasteland justice or whatever.

Rage 2 is an open world action shooter from Avalanche Studios. It was released in May 2019 and is a sequel to 2011’s Rage from Id Software. It’s set in a Mad Max style post-apocalypse desert filled with feral mutants and bloodthirsty scavengers. You drive around to find outposts, and then jump out of your car to shoot dudes and collect crap to upgrade your arsenal. You’ve got a technology super-suit that lets you dash, double-jump, and ground-pound like a cross between Mario and Master Chief.

Different map locations offer different sorts of challenges. Sometimes you just need to shoot everybody. Sometimes you need to destroy a device. Occasionally a location is just a peaceful scavenger hunt. Rarely, a location will be a very mild puzzle where you need to figure out how to enter a building to get some goodies. There’s some car racing and a bit of driving combat in the mix, some arena battles against waves of mutants, and a heaping dose of Ubisoft-style collect-a-thon.

The story doesn’t really gate much  progressYou need to do one of the first missions to gain access to the shotgun, and a few upgrades are tied to early-game missions. so you can engage with it at your own pace. You can plow straight through the story and ignore the side-content for a serious challengeActually, it’s possible that a couple of story missions are gated by cleaning off bits of the map. I didn’t run into any roadblocks, but I did a lot of side content. or you can spend hours exploring the entire map and then stroll through the story missions like a munchkin god.

As perverse as it might seem, this series is going to focus on the main story of Rage 2. 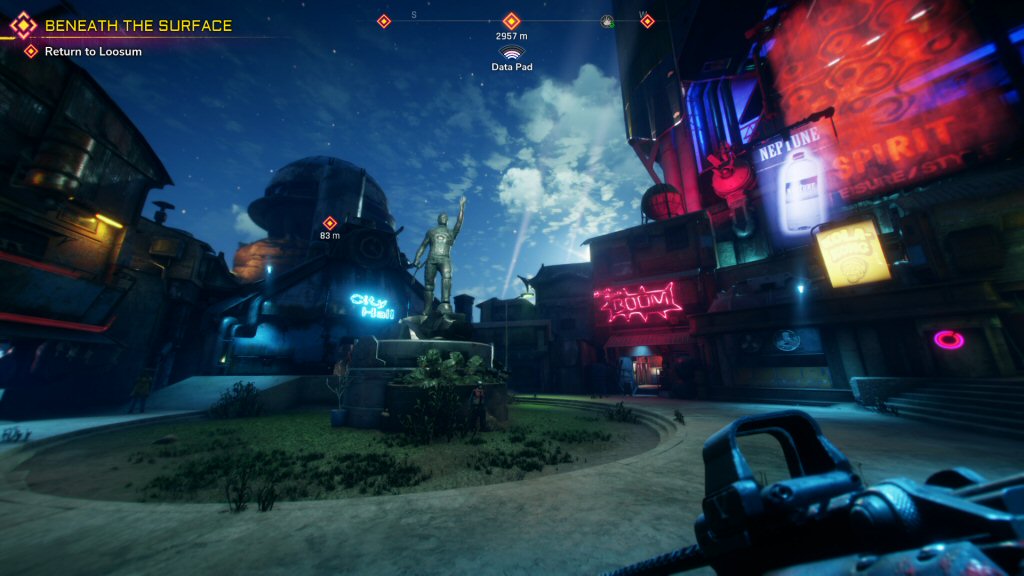 This is a lot of neon advertisements for a society that has yet to exceed the population of a stone age tribal village, but whatever. I don't know what they eat, but I love their signage.

As I’ve said before, you don’t need a lot of story to have a good story. You don’t need long cutscenes, a large cast of characters, moral choices, branching dialog, plot twists, or multiple endings. You don’t need player customization, companions, or character classes. Rage 2 is an open world empowerment shooter, and it’s entirely appropriate to build a game like this on top of a premise like: “There’s a bad guy. You don’t like him. Go murder his face off.” Not only is it okay to do that, but it’s possible to take that simple premise and make it really good! I’m a fan of Bulletstorm, and that game is neither complex nor highbrow when it comes to story. It takes a simple idea and executes it in a way that’s in harmony with the gameplay.

This series is going to be less about castigating the developers for mistakes and more about offering constructive criticism.  I want to encourage the Rage franchise to continue its efforts to build some kind of narrative structure to hang the whole thing on. My previous retrospectives were focused on story heavy games, and this time I want to focus on telling a minimalist story that can still deliver some sort of dramatic payload. My criticism here will focus on what this game did wrong, but it could also be used to figure out how to make the next game better.

This also means I’m going to be a little nicer than usual to developer Avalanche Studios. I savaged poor BioWare Montreal for the failings of Mass Effect Andromeda because the Mass Effect series is built on story and developer BioWare Montreal needed to live up to the BioWare legacy. But Rage 2 isn’t a story-based roleplaying game and Avalanche isn’t a studio that sells itself on its storytelling prowess. Both games break a lot of conventional wisdom regarding story, and they both suffer for it. The point of the Andromeda series was to point out that BioWare Montreal had failed spectacularly in their efforts to capture the magic of a BioWare game. My goal with this series is to convince Avalanche Studios that their games would be greatly improved in terms of critical and commercial reception if they were willing to put more thought into the story.

To put it another way: BioWare Montreal tried and failed. Here I want to convince Avalanche to try. (Once they try, then I can do a more critical narrative analysis.)

The thing is, this game isn’t that bad in terms of mechanics. I’ve certainly seen games with far less interesting gameplay that scored much higher. I think the problem with Rage 2 is that the story didn’t offer any emotional engagement. It’s an open world game that can’t get us to care about the world.

Pink is not Comedy

I think of PINK as a pastel red. The color above I call magenta. But everyone else calls this pink, so I dunno.

I need to mention one last thing before we start picking at the story, which is that the project very clearly went through a last-minute tonal shift into attempted / alleged comedy. It reminds me a bit of Borderland‘s 11th hour pivot to action comedy, only this time it didn’t work. The comedy is even expressed in a similar way: A wacky trailer, title card intros for major characters, some silly names, and no actual jokes whatsoever. The main plot is painfully self-serious, and all of the supposed comedy comes from superficial last-minute art assets that were bolted on when the game was basically done.

The game uses hot pink / magenta as the eye-catch color, the way Tomb Raider games use smears of white chalk and paint to draw attention to climbable objects. The pink is amusing when contrasted with this desperate Mad Max style desert, but it’s not amusing enough to carry the game into the realm of comedy all by itself.

I can't stop laughing at how pink everything is. That's not the color of a desert!

I would seriously love to know if the team had a last-minute change of heart, or if the publisher imposed this on them in response to current trends. Did this idea come from the creative people following their passion, or from marketing people chasing successful trends?

In any case, comedy is a much better fit for the world of Rage. The setting is too silly to support the anger-filled slaughterfest the first game established. This is a goofy world with outrageous superpowers and a cartoon villain. This setting and premise are a natural set-up for comedy and a terrible starting point for drama. Anthony Burch made a similar point about the outlandish world of Borderlands: Anyone attempting a serious story in this world is going to face an uphill battle, and anyone trying to tell jokes is going to have lots of material to work with.

Next week I’m going to begin stepping through this story and offering my advice to the current / future writers of the series.

[1] You need to do one of the first missions to gain access to the shotgun, and a few upgrades are tied to early-game missions.

[2] Actually, it’s possible that a couple of story missions are gated by cleaning off bits of the map. I didn’t run into any roadblocks, but I did a lot of side content.

 Control Part 3: Unbalanced by DesignPrevious Post
Next PostRage 2 Part 2: Shut Up and Let Me Shoot Stuff 
From The Archives:

A look back at one of my favorite games. The gameplay was stellar, but the underlying story was clumsy and oddly constructed.