This game came out to critical praise. The trailers looked good. Outside of the technology problems on the PC, there’s wasn’t a lot of negative press. But then the game was 50% off just one month after release, which isn’t something you normally see with successful games. Yes, that was a black Friday sale and those are always a little crazy. But even so, I didn’t see any other 1-month old AAA games going on that sort of deep discount. Was this an anomaly, or was the publisher struggling to sell this game?

I have no idea, but after playing through a couple of times I can say there is definitely something off about Wolfenstein II.

The Legacy of Wolfenstein 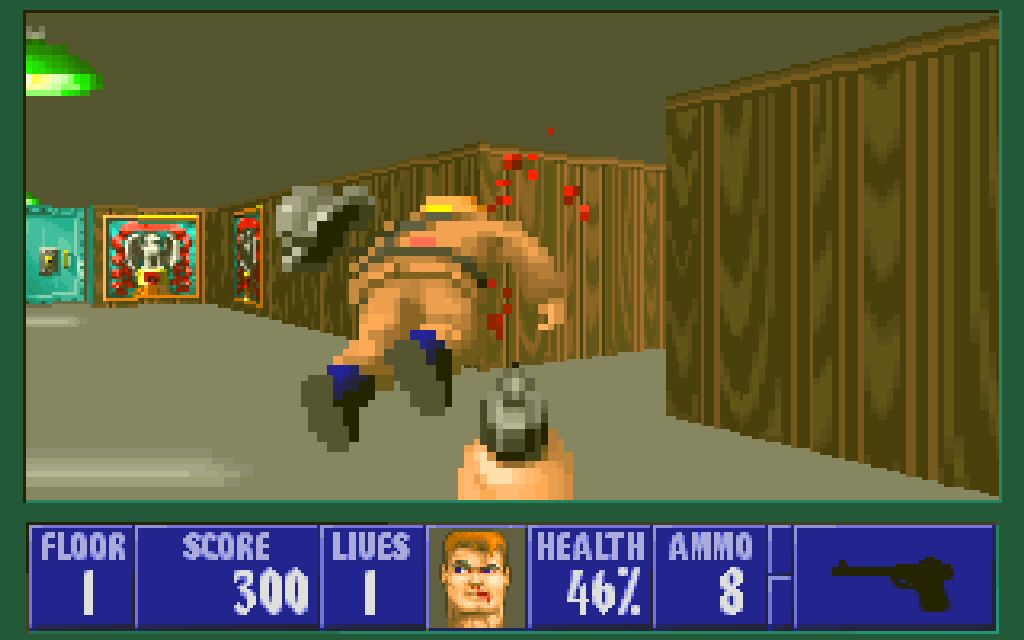 I remember when people thought this game was EXTREMELY VIOLENT. Ha ha.

There have been a total of eleven games in the Wolfenstein series. They are:

In the world of Wolfenstein, protagonist BJ Blazkowicz is an inexplicably unstoppable Nazi-killing machine. Sometimes the game is set during WWII, and other times it’s set in an alternate-universe where the Nazis won WWII.

The first two games were top-down RPG-ish stealth games that are divorced from everything that followed. The third game was the birth of the series as a first-person shooter, and also the birth of first-person shootersActually Catacomb 3-D came first, but Wolfenstein was the first FPS to be a hit and thus that’s the one history remembers.. You could argue that the series has been rebooted in 1992, 2001, 2008, 2009, and 2014. Or maybe some of those reboots were just loose continuations on what came before. The series has always been a little casual about things like story and continuity and there’s not a lot to be gained from trying to put the whole thing into a coherent timelineAlthough people do try..

Regardless of whether you see it as a reboot or not, The New Order relaunched the game with a specific tone, presentation, and set of mechanics. These last three games can stand alone and are firmly connected by recurring characters and storylines. They share a couple of characters with the 2009 title, which suggests the games are linked. But if you go by the sequel numbering then the 2009 game isn’t part of this series.

(I tried to play through Wolfenstein 2009 for this series, but you can’t get it on Steam or GoG.)

Anyway. You can argue about what is or is not a reboot, but it’s very clear that these last three entries are connected to each other more than they are connected to what came before. So for the purposes of this series I’m going to be looking at these games as a sort of standalone franchise.

Why Are We Talking About This?

Heads up: I had to turn down the graphics settings to get the game to run smoothly. The screenshots in this series are not representative of the quality of the game if you've got mid-range hardware. I know I'm due for an upgrade. I'll do it when I can.

This isn’t an RPG. There aren’t a lot of complex leveling mechanics, branching storylines, moral choices, or philosophical conundrums for the player to puzzle over. The game throws Nazis in your way and you shoot them. This is a fairly simple game in both a narrative and mechanical sense. So why am I bothering to do a deep-dive on a linear shooter?

Basically, because I think the gaming press whiffed on this game. As of this writing, New Colossus is scoring an 88% on Metacritic. I realize that tastes vary and I’m not arguing that any individual review is wrong. If you think this game really is an 88% that’s fine. But this game is rated far above New Order and I think when you examine it closely it’s clearly inferior.

New Colossus looks and feels superficially like its immediate predecessors, and so it was given a pass. But I think it was a clear regression from the last two games and yet somehow it received greater critical praise and was nominated for many best-of-2017 lists. The Telegraph even called it “one of this decade’s best”. (Which is slanderous to a lot of other things that came out this decade, including the previous two games.)

I really liked Wolfenstein: The New Order. It was an old-school run-n-gun shooter with just enough gritty storytelling to make it interesting and just enough camp to keep it fun. Our hero BJ Blazkowicz takes the world seriously so you don’t have to. He gives these grim monologues like he’s Max Payne, but he’s fighting cartoonish mega-Nazis in a mad alternate history where the Nazis conquered the world with super-science.

Wolfenstein: The Old Blood wasn’t quite as fun and seemed to be missing the driving spark that the previous game had. The emotional core was built around a couple of NPC lovers trying to find each other amidst the chaos. I liked it, but I only played through it once and I never really had any desire to give it another go.

Unless you rate a game based solely on the running time of its cutscenes, New Colossus is inferior to both of these games.

As a single example of the sorts of problems I’m talking about, let’s look at…

I've got two guns. One for each of ya.

These Wolfenstein games allow you to dual-wield weapons, including two-handed weapons like automatic shotguns and such.

In The New Order, the game was super-silly about this. You could hit reload and BJ would pull the mag out of his current weapon. But then a Nazi would come around the corner while you were reloading, and you could resume firing (assuming there were still bullets left in the mag) even though you’d supposedly unloaded the weapon. Once you put the Nazi down and hit reload again, BJ would start the process over from the beginning, pulling another(?) mag out of the gun.

I’ll admit it didn’t make a lot of sense. Then again, I don’t think that making sense was high on the priority list here. BJ carries half a dozen weapons at the same time. If you assume the dual-wielding means he’s got two of everything, then it’s entirely possible that his arsenal would outweigh him. He adds armor to his body by collecting Nazi helmets and repairs gunshot wounds by eating apples he finds lying around the Nazi base.

But here in New Colossus they seem to have taken a step towards realism, and I have no idea why. If you start reloading one weapon, BJ will reload both before you’re allowed to shoot again and you can’t cancel the process. Worse, reloading feels a lot slower in this game. Same goes for weapon switching. This makes sense in terms of realism, but it basically makes dual wielding useless. Sure, you can output twice as much damage, but reloading now takes twice as long and happens when one gun runs out of bullets, even if the other has ammunition left.

Given that the tradeoff here is that we’re getting “You might be able to kill dudes faster” at the risk of “You might get caught in a double-long reload cycle and be unable to defend yourself at a really bad moment” this doesn’t seem like it’s worth it.

Is this gripe petty? Yes. This is a small feature. It doesn’t ruin the game. It barely detracts from it. But it’s something they changed and it’s not clear why. You might argue it was for balance, but the difficulty curve on this game is incredibly uneven and small little adjustments like this would barely register in the grand scheme of things. You could argue it was for realism, but like I said I don’t think that’s anyone’s priority.

It’s not a big deal, but it is something that The New Order did better. This is a theme you’ll see repeated throughout this series. I realize this one was a little weak, but I promise we’ll get to the important stuff once we start going through the game.

Next time I’m going to talk about some of the wonky technology problems we had in the PC version.

[1] Actually Catacomb 3-D came first, but Wolfenstein was the first FPS to be a hit and thus that’s the one history remembers.

[2] Although people do try.