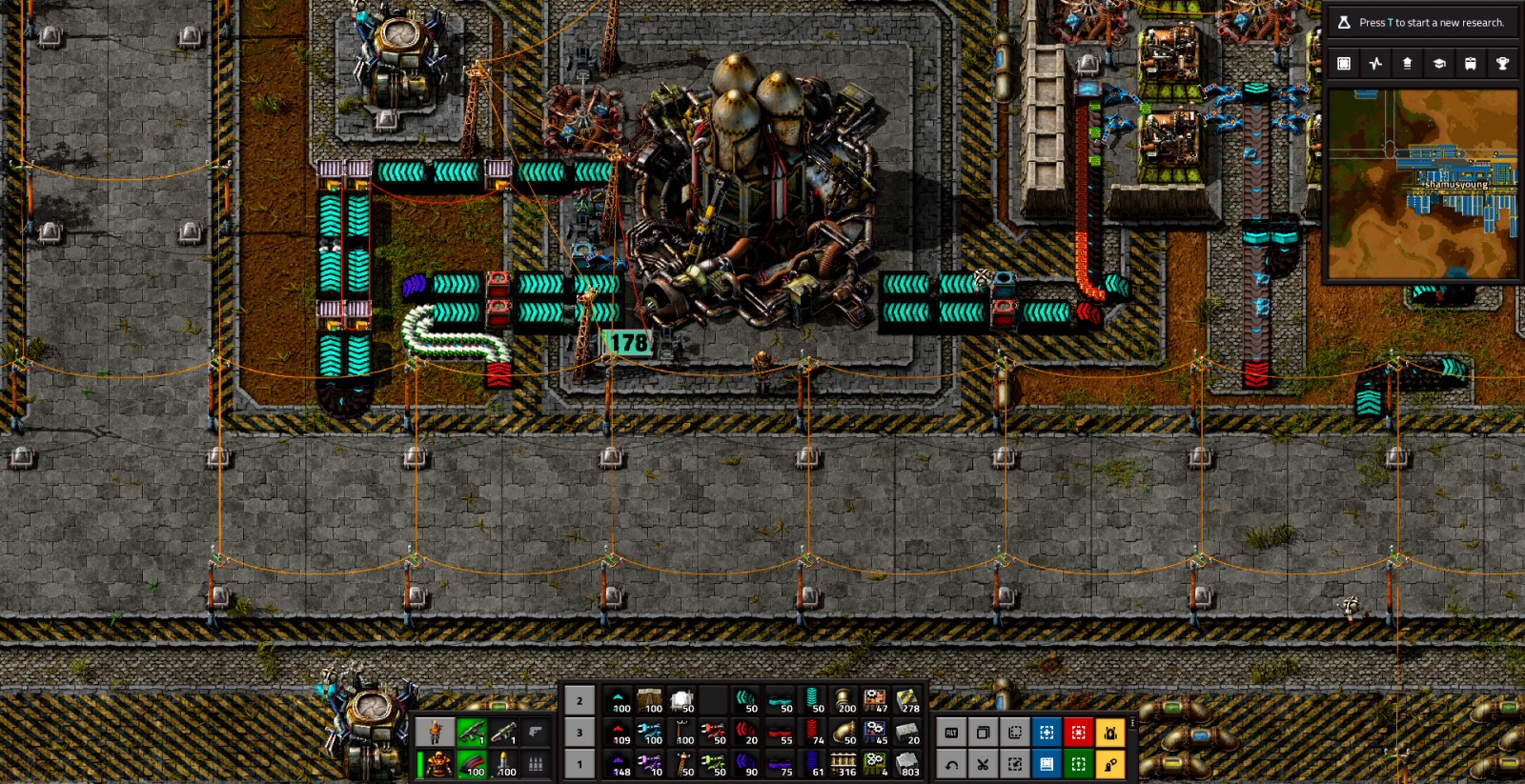 I've downloaded a mod that lets you hook numeric panels to the circuit network. You can see I've launched 178 rockets so far.

I’ve been messing around with various cheat mods, and I’ve found the game to be more engrossing than ever. It’s a lot like my recent obsession with Cities Skylines. Sometimes cheats can make a game more interesting by allowing you to focus more time on the parts that most interest you. I wouldn’t want to have these cheats when I’m learning the game, but once you’ve mastered the systems it’s nice to skip the early game and small-scale stuff so you can focus on the large throughput and optimization challenges.

The mod I’m using adds 5 more tiers that go all the way up to a brain-melting 270 items per second. That sounds game-breaking, but I discovered that it really just delays the inevitable. No matter how fast your belts get, you’ll quickly scale up and hit the new limit. Just like internet speeds, hard drives, and CPU speeds in the 90s, it doesn’t take long for your fancy new tech to become the new bottleneck.

270 seems fast, but once you have multiple cargo trains delivering items and trying to pump them through the base on a single conveyor, you'll start to wonder if maybe there's a mod for 320 or even 400.

It’s a bit like this Jon Blow talk I’ve linked to before:

Blow talks about how our software is getting worse as our machines get faster. Instead of making programs better, the extra power ends up being consumed by poor engineering. As an example he compares different versions of Adobe Photoshop. In the 90s, it took several seconds to load the program off of your slow-ass hard drive. Then 20 years later we have computers that are literally thousands of times faster, but the program is somehow even less responsive.

In short, you can make massive improvements to throughput in Factorio, but you can’t get them by just making the individual parts operate faster. You need to attack the problem on an engineering level and think about your production on a macro scale.

I love this game.

This is some classic Valve-style level design. At the start of the level there's a weapon off to one side. The player naturally moves to pick it up. Then the door in the distance opens to reveal some snipers. This makes sure you're looking in the right direction so you understand what's happening.

This is another entry in the recent trend of 90s retro shooters. Like contemporaries Dusk, STRAFE, Ion Fury, Amid Evil, Devil Daggers, WRATH: Aeon of Ruin, and (to a lesser extent) Get to the Orange Door, this game rummages through the big toybox of classic 90s gameplay, looking for what elements it wants to preserve and what it wants to change.

A lot of these games have the “problem” that they re-create the frantic pace of the original games. That’s not a problem if you’re into non-stop action, but 25 years later I find the relentless tempo of the old games to be exhausting. In 2004 Half-Life 2 featured crucial moments of deliberate quiet time, and that changed how I think about shooters.

Sure, there were quiet moments in DOOM and Quake, but those moments were probably the result of you taking a wrong turn or getting lost. Spending five minutes running around at breakneck speed looking for the RED keycard isn’t really quiet time, even if the shooting has stopped. Half-Life 2 gave us moments of quiet time that had been deliberately crafted by the designer. There would be some slow, forlorn music playing. You’d hear some ominous sounds in the distance like crows or groaning metal. The game would create a sense of isolation while you explored the space to solve a puzzle and catch your breath. Those moments of downtime made it so that you could really feel the impact when things slammed into high gear again.

That sensation of “calm before the storm” didn’t exist in the 90s. And it seems to have fallen out of favor with modern shooters as well. These days “quiet time” just means you get locked in a room while someone takes an exposition dump on you. That’s not quiet time, that’s a movie. (And usually, a bad movie.)

So I find a lot of these old games to be too tiring to play for extended periods of time. Those old games were half my life ago, so maybe that’s my age talking. But maybe Half-Life 2 ruined the old games for me. In any case, I can only play these modern throwbacks for about thirty minutes before I’m numb from the endless screaming and gunfire.

These snipers are super-annoying. You need to play peek-a-boo with them for the whole level, before you finally get in behind them for some sweet retribution.

Prodeus doesn’t quite have Half-Life 2 style quiet time, but the game does have some variation in its pacing. It’s not just an endless maze full of repetitive gunfights. Most levels are built around an idea. Maybe you need to make a long climb. Or maybe the area starts out as a linear series of rooms, but as you go you keep opening doors to previous rooms, opening up the layout until it’s kind of a large arena. Some levels will take you through the same room several times, but the room will feature a new twist every time you enter.

My favorite level is Marksman, where there’s a huge tower in the middle of the level. There are snipers in the tower, and they hound you constantly as you work your way around and then ascend to finally get in behind them. It made for some interesting 2-axis fights. I need to keep moving to deal with the foes in front of me, but I also need to manage my line-of-sight to the tower on my right.

The constant twists and variations in level design made the game feel like more than an endless series of rooms to circle-strafe in. And the game does have deliberate quiet moments here and there.  Often you’ll emerge from the base / caves / tunnels into the daylight and you’ll have a vista to take in rather than another gunfight. The whole experience is a masterclass in level design.

I’ve gone through all of the existing levels (the game is currently in early access) for now. I’m really looking forward to the next batch of content. Highly recommended.

You might remember I played one of these games back in 2017. It was... an experience. Click to read about it.

In the middle of last year, I noticed that there were always two or three adult titles in the top 20 best-sellers on Steam. That stood out to me. Nobody talks about these games, yet they were topping the charts. At the same time, people in other countries were saying that they hadn’t observed a surge in adult titles. Was this a fluke? Did it have something to do with the pandemic?

So I subscribed to a VPN. I had this idea for a post / series where I was going to look at the best-selling lists on Steam in different countries and see where these games were selling. But then I put it off while I finished up my series on Jedi Fallen Order, and then I put it off some more because I was working on the Book.

And then I noticed that the craze seems to have ended. A couple of weeks ago I checked in and there weren’t any adult games on the charts. Weird. I don’t know enough about this genre / subculture to make sense of this.

What Have You Been Playing?

So what’s going on these days? Catching up on new stuff? Retro stuff? Indie? AAA? What’s good? What games should we avoid?

 This Week I Played... (February 2021)Previous Post
From The Archives:

Game at the Bottom

Why spend millions on visuals that are just a distraction from the REAL game of hotbar-watching?