Support Me  RSS  RSS (Comments)
 Bethesda's Launcher is Everything You ExpectPrevious Post
Next PostWindows: The Dread of Updates 

I’m not totally sure when I switched from Firefox to Google Chrome. I feel like it was about the same time that I created my Gmail account, which (going by my archives) seems to be in September of 2008.

So I’ve been on Chrome for ~12 years. I’ve been happy with it up until the last six months or so, as Chrome has grown gradually more unwieldyI have a list of minor interface nitpicks and annoyances that aren’t really worth getting into in this post. Maybe another time. and slow. Also, the reputation of Google has shifted over the last 12 years. Back in 2008, Google was beloved as the force behind some of the internet’s greatest innovations: Google search, YouTube, and Gmail. Here in 2020, people are wary of Google’s eponymous search engine over privacy concerns. YouTube has become a frustrating, unjust, and downright Orwellian platform. And Gmail? I guess Gmail is fine, if we’re okay with it being needlessly and aggressively ugly.

The point is that Google no longer comes across as a hip young company full of idealistic mavericks. These days it feels like a monolithic corporate overlord in a dystopian cyberpunk novel, and every time they show up in the news I feel the need to extricate myself from their ecosystem.

On the performance side, Chrome began driving me crazy a few months ago when individual tabs would hang for several seconds at a time. I ran into this a lot when scrolling media-heavy subreddits. Sometimes the page would stall and the entire Chrome interface – including switching tabs – would become gradually more unresponsive until I restarted it. My computer is pretty beefy, and I’ve never run into these slowdowns before. Performance seems nice and smooth outside of Chrome, which leads me to believe the problem is with Chrome and not the hardware / OS.

So far I’ve avoided moving because it’s such a monumental pain in the ass to change web browsers these days. I keep Firefox around for testing purposes, but I’ve never liked it enough to make it my main. And obviously I’m not interested in Microsoft’s offerings.

But now I’ve jumped to Brave, and I’m not sure what I’ve gotten myself into.

As far as I can tell, the big two selling points with Brave are:

A built-in adblocker! How times have changed. I can remember being opposed to ad blockers on principle. In fact, my position evolved quite a bit over the years…

I can’t believe anyone would block ads! That’s how content creators get paid. It only takes a tiny fraction of a second to download, and it helps pay everyone’s bills. Sure, ads are a little ugly. But ads are what make this giant machine of free content possible. Stop being so petty!

This situation is unfortunate, but advertisements have become so aggressive that I can’t really fault people for blocking them. I still won’t personally use an adblocker because I’m willing to bear these constant annoyances to support my favorite content creators.

Ugh. This is a nightmare. This text article is hidden behind an unpausable auto-play video ad that blasts at full volume. This is going to blow out my speakers if it keeps happening. Also, it’s startling and seriously painful. Last month an ad woke the baby up, and I’m still mad about that. Also, the oldest kid clicked on a tricky ad by accident and now the laptop is all messed up. Also, I’m irritated about all the wasted bandwidth. This mess is now hurting me, my family, and my property. I’d prefer to support creators, but I can’t condone this destructive behavior. I’m getting an ad blocker.

Having an adblocker in place is just basic self-preservation. It’s the first thing I install on a new setup before I venture out onto the web. I feel sorry for small-time creators, but ads now represent a huge obstacle to security, usability, safety, and sanity. I guess I’ll try to remember to whitelist sites that I really like.

I install adblockers on every machine entrusted to me by friends and family members. I don’t even ask permission. Content creators need to move to Patreon, because my main priority these days is punishing the sites that fill the web with liesYOUR COMPUTER IS INFECTED! CLICK HERE NOW TO DOWNLOAD OUR MALWARE! and attacks on usabilityMy rule is that ads should never escallate content. Don’t make me read a bunch of shit to download a tiny file. Don’t make me watch a video to read text. Don’t make me interact with an ad to see a video.. The economics of the internet aren’t as important as the integrity of the internet. The text-based web of 1997 worked just fine for me, and everyone managed to pay the bills without ads. If universal adblocking causes a collapse that takes us back to that primitive world, then so be it!

It’s been a slow process, but here we are. It started off as an argument over etiquette, and ended in a war with scorched-earth tactics. 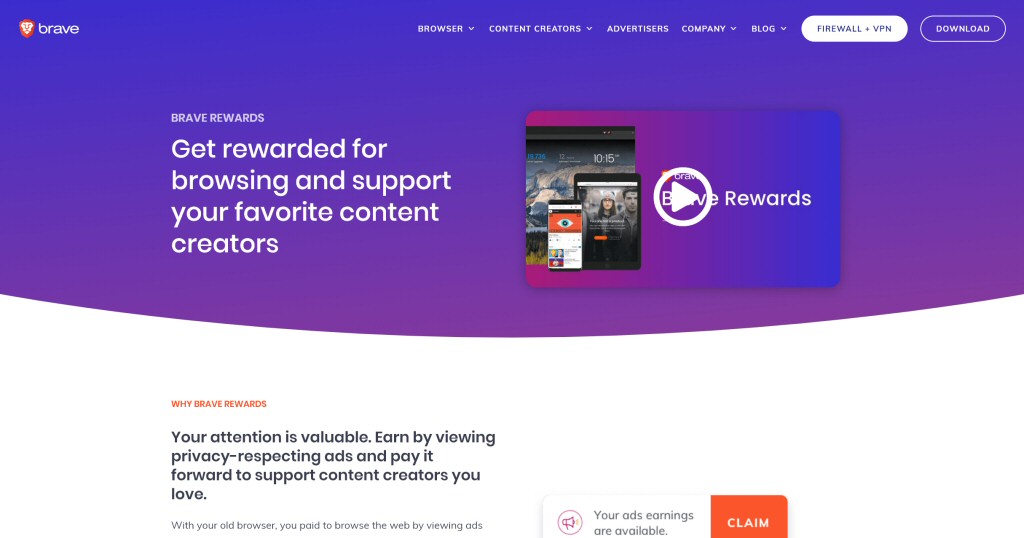 Brave sells itself on being this cool hippie-dippy privacy browser that will fight for the people by standing up to the big corporations, but it’s really just a fresh new flavor of the same corporate medicine.

The browser promises security and privacy. It does so by creating a wall between users and websites. You can’t see their ads, and they can’t see who you are. But then Brave has this tipjar system for paying creators. You need to create an account to participate, so there goes your private web surfing. Websites will need to sign up with Brave to get their share of whatever money comes in, so we’re just adding a middleman to the data-harvesting.

I’m not 100% sure how the tipjar stuff works. Normally I sign up for stupid stuff so you don’t have to, but I REALLY didn’t want to join this particular rodeo.

Brave isn’t getting rid of ads and corporate data-harvesting, they’re trying to create a world where they’re the only ones who can do it. Brave would effectively be a broker between user and website. The only way a web site can learn about you is from Brave, and the only way to indirectly support sites you visit is to sign up with Brave. Instead of twenty corporations all having your personal info, just one company does. Maybe that sounds like an improvement, but I vividly remember the fall of Google from friend to foe. Systems evolve based on their incentives, and the incentive system surrounding Brave does not push the platform towards virtue.

But What Do I Know?

Assuming the browser takes off, it will probably turn into something ugly and horrible in a few years. But for now it’s just a better version of Chrome. It feels exactly like Chrome, except it doesn’t get bogged down under a huge 20-tab load like the older browser does. It’s got a nice comprehensive adblockerPreviously I used uBlock Origin. In fact, the plugin is automatically running under Brave, but I don’t think there’s much for it to block now., which means there’s less crap for me to maintain / worry about. It’s got this wonderful feature that lets you view the current website as it would appear on various mobile devices, which will be enormously useful to me when I’m maintaining this site.

I’ll probably use Brave for a couple of years and then leave if things get creepy. We’ll see how it goes.

So what browser(s) are you using these days?

[1] I have a list of minor interface nitpicks and annoyances that aren’t really worth getting into in this post. Maybe another time.

[4] Previously I used uBlock Origin. In fact, the plugin is automatically running under Brave, but I don’t think there’s much for it to block now.

 Bethesda's Launcher is Everything You ExpectPrevious Post
Next PostWindows: The Dread of Updates 
From The Archives:

The Brilliance of Mass Effect

What is "Domino Worldbuilding" and how did it help to make Mass Effect one of the most interesting settings in modern RPGs?