Three months ago someone gifted me a gaming PC. I mentioned it on the podcast, but I know not everyone listens to the podcast. So I thought I’d give the machine a proper write-up.

The machine in question is a Corsair One. This is a pre-built gaming PC with a custom case. This machine is a first for me in a lot of different ways:

First time with a liquid-cooled machine.

It’s quite a slick setup. The tubes run over one side of the case to cool the CPU, then flow to the others side to pass over the GPU. It’s amazingly quiet. My old PC was a box of large whirring fans, while the new one doesn’t seem to make any noise at all, even under load. If it wasn’t for all the lights, I wouldn’t be able to tell it was on. 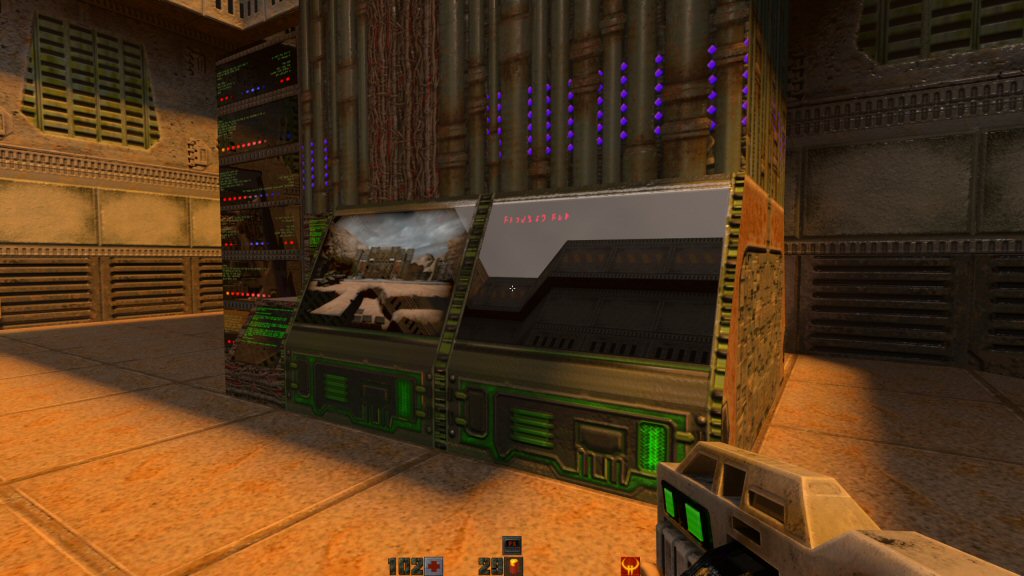 Those screens on the left are showing real reflections. If I was standing in the right spot, I'd be able to see my reflection in the glass.

The new machine comes equipped with a GeForce RTX 2080. I tried to put the card through its paces, but then I realized I didn’t have anything that could remotely challenge it. Even at 2k resolution and 144fps, I couldn’t get Shadow of the Tomb Raider to drop frames.

The RTX means it can handle NVIDIA’s new raytracing technology, which means I got to try the Quake 2 raytracing demo. Really interesting. I’ll probably do a column on this soon.

First time owning a machine with NO removable media.

It’s weird to have a machine that can’t read any disks, but this seems to be the norm these days. I picked up a USB DVD drive so I can install the disk-based programs I still use. There aren’t many.

First time since the 90s that I was able to appreciate framerates above 60fps.

I can't show you a screenshot that will illustrate smooth framerate, so here is another shot of Quake 2 with raytracing.

I’ve said many times in the past that I can barely tell the difference between 30fps and 60fps. I remember really noticing the difference back in the mid-90s, but over the last few years I’ve messed around with higher framerates and found they didn’t make much of a difference. I’ve always blamed this on my aging eyes.

I’m trying hard to not become a framerate snob, but I’d really hate to go back to 30fps.

First time with a 2k monitor.

The large monitor on the left is the old one. The one on the right is the new 2k gaming monitor. You can't see the difference in this bloom-covered photograph, but it's pretty stark in person.

I honestly thought “gaming monitors” were a bit of a swindle. My standard monitors always looked just fine to me, so I couldn’t imagine what sorts of benefits there were to a gaming monitor.

But now I’ve got a 2k gaming monitor next to my old 1080p office monitor, and the difference is pretty drastic. The most notable thing is the higher dynamic range. On the old monitor, black areas of an image are dark grey, while the new monitor shows them as proper black. This makes the colors pop more. The old monitor is also quite a bit dimmer. You’d think it would be harder on your eyes to stare at brighter whites for extended periods of timeParticularly since I keep my office dark. but that doesn’t seem to be the case.

Oddly enough, the extra resolution helps my work more than my games. I can have a lot more text on screen without sacrificing readability. This is really nice in complex applications like music production and programming tools. Nothing helps your workflow like being able to see more stuff.

This upgrade came at just the right time. My Wolfenstein series last year had a lot of screenshots that showed the game in “Ultra Crap Mode”. This was unfortunate, since one of my major complaints was that the game looked artistically terrible and demanded too much power given the substandard visuals. Playing on lowest settings left me open to the easy dismissal that the game would look just fine on proper hardware. To really sell my thesis, it would have been better to have a high-end machine so I could say, “This is how the game looks on max settings, and it’s still dull and repetitive.”

This upgrade has made my entire job easier and significantly less stressful. Thanks again to the benefactor who provided it. I’m grateful for this thing every day.

[1] Particularly since I keep my office dark.

A game I love. It has a solid main story and a couple of really obnoxious, cringy, incoherent side-plots in it. What happened here?

Charging More for a Worse Product

No, game prices don't "need" to go up. That's not how supply and demand works. Instead, the publishers need to be smarter about where they spend their money.

It's not a legend. It was real. There was a time before DLC. Before DRM. Before crappy ports. It was glorious.

A game about the ghost of an underwater football player who travels through time to save the world from a tick that controls kaiju satan. Really.

As someone who loves Tolkein lore and despises silly MMO quests, this game left me deeply conflicted.

56 thoughts on “The New Computer”