Last week I outlined the plot of Grand Theft Auto V. As I hope my synopsis made clear, this game gets lost and spends the majority of its running time on elements that are completely divorced from the central conflict. It presents problems, and then throws a never-ending series of distractions at our antiheroes

For clarity, when I talk about the “central conflict” I’m talking about the personal drama between our three lead characters. The game opens with the job that causes the division between Michael and Trevor, and – assuming you choose the sensible ending – they nominally reconcile right before the closing credits. You could also make the case that one of these other plot threads is the “main” one, although that’s just moving the problem around. You could argue that the FIB is the main plot because it gets the most time, but then we have a story where the main plot isn’t introduced for several hours, and when it IS resolved it’s bundled with a bunch of other problems. You could claim that The Big Heist is the main plot because it feels like the most reasonable way to end a game with these mechanics, but then you have a “main plot” that gets almost no screen time and hits its finale over an hour before the story concludes. No matter how you map it out, nothing in this story feels like a properly developed central pillar.

I put the Michael / Trevor / Franklin at the center because it’s present at the beginning, the end, and we get lots of reminders about it as the story goes on, even if the situation isn’t making any progress. 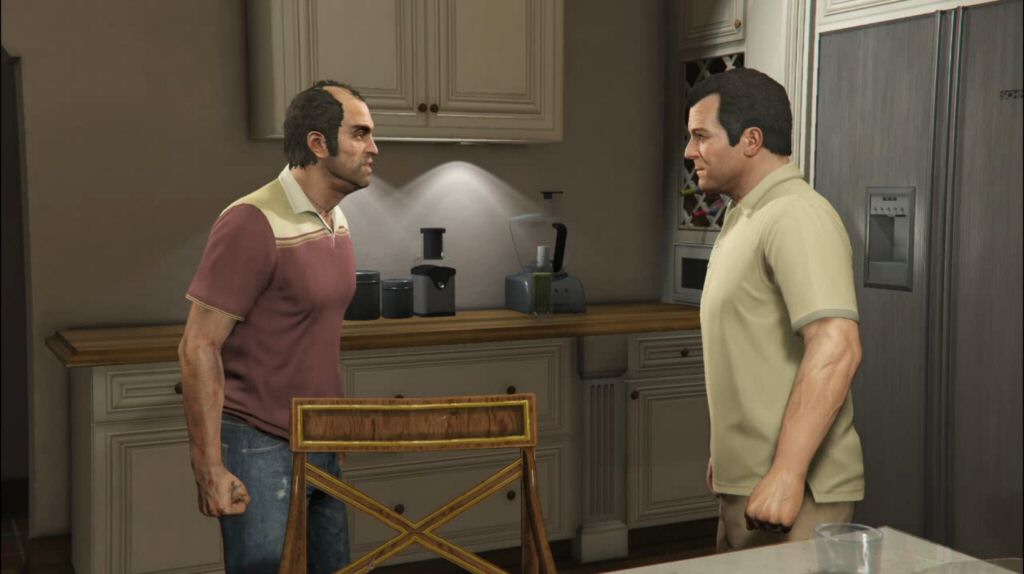 Well, this is awkward.

On paper, it’s a pretty good hook: Trevor is a dangerous psychopath. Yet despite his depravity, he’s also a fiercely loyal friend. Michael gets married and his concerns shift to worrying about his family more than his career. Trevor has no such reservations and just wants to keep robbing people forever. Eventually Michael – to save his own life and his family – betrays his crew and sets up a situation designed to kill off his associates and allow him to exit this life of crime. By sheer luck and stubbornness, Trevor survives anyway. Once the game begins and the two are reunited, Trevor is torn between his loyalty towards the only real friend he’s ever had, and his deep personal hurt at being betrayed by that same person. At the same time, the story shows that Trevor kinda needs Michael. Trevor’s own criminal schemes are sad and pathetic because his only real skill is killing lots of people. Trevor wants revenge, but he also wants to pretend the last 9 years didn’t happen and go back to pulling heists. Adding salt to the wound is the fact that Michael has taken on a new student, effectively replacing the role Trevor originally served. Also, by getting back in the game Michael has negated the entire purpose of the betrayal in the first place, adding to the hurt.

As much as I’m going to nitpick this story, I’ll admit up front that this premise is dynamite. You’ve got the makings of a really good movie right there. You’ve got a strong personal conflict between two well-drawn characters, and tons of external forces shoving them together. We can argue about whether or not this story meshes with the tone of the world, but this could make for a fantastic 90-minute movie.

But sadly, this isn’t a 90-minute movie. This is a 12 hour videogame, and the 90 minutes of potential drama are diluted and confused by countless side-stories, dead-ends, and digressions. 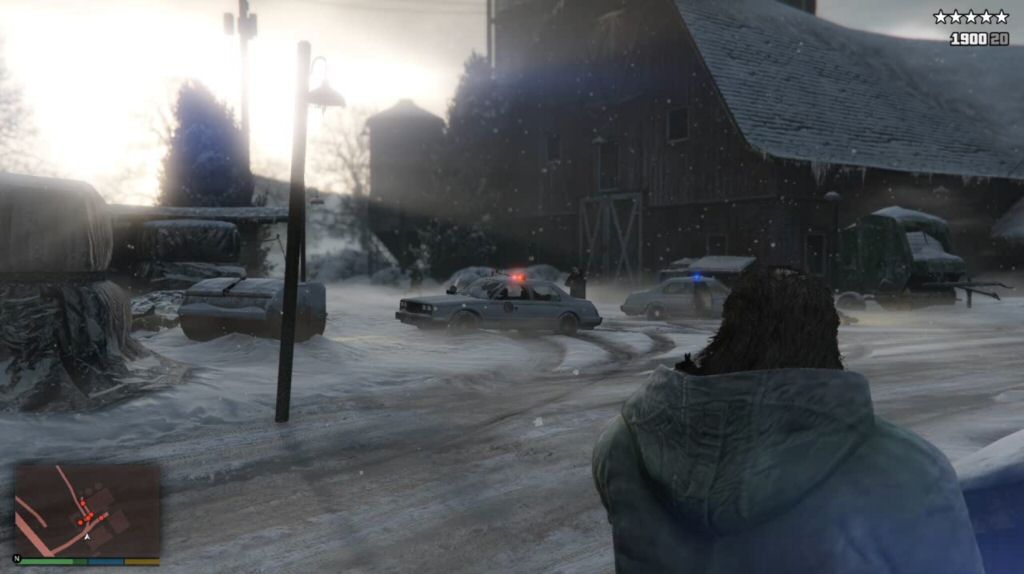 Trevor, thinking his best friend is dead, decides to go out in a blaze of glory. It's kinda heartbreaking once you understand him.

If the writer wanted to keep this Trevor vs. Michael plot going, then they needed to put in the time to sustain it in the middle of the story and drive home that it was still a threat. Maybe we could get a scene where Trevor says to one of his friends that he’s going to use Michael for “one last job” and then kill him in the escape, since that’s what Michael tried to do to him. Then we could switch over to Michael and he would be talking to the FIB about how he needs to kill Trevor to keep his family safe. Then all of their following scenes together would take on a sinister tone as each of them feins friendship while plotting against the other.

But by the halfway point I honestly thought that the Michael / Trevor conflict was “resolved”. They had a bonding moment where they attacked a reality TV host (it’s a long story) and were then united against the FIB. Sure, Michael was scared and Trevor was hurt, but those emotions don’t drive the story. By the time they start working for the FIB, it feels like their mutual distrust is just there to fuel their banter. It’s not portrayed as a looming threat and it certainly doesn’t seem to be building to anything.

Our options are to kill Michael, kill Trevor, or blow up the collector base.

The final choice for this game is so awkward, unsatisfying, and inappropriate that I wonder if it’s a clumsy satirical dig at ending choices in games. On the other hand, where’s the satire? This doesn’t satirize dumb choices. It simply is one.

Your choices (as presented to Franklin) are:

If you choose the third option then the story leads to a more or less natural conclusion with our three protagonists settling things with their various foes. But if you chose to kill Michael then I guess that makes this a story about Michael paying for his betrayal? If you kill Trevor then I guess it’s about… what? Using him for one last job before betraying him again?

It’s really goofy to offer this choice at the end that boils down to “choose what you think the previous 12 hours were about”. If this was a story about making Michael pay for his backstab, then why were we obliged to spend so much time making things right between him and his family? If this was a story about finishing off Trevor, then why didn’t we do that ages ago? Neither of these options really work as a proper conclusion.

We get three ending choices, but only one of them lets us kill this annoying jackass who has been creating problems and frustration since he showed up.

The worst part about killing Trevor / Michael is that these choices take all the other plot threads and throw them out for no reason. You’ve spent the entire game inexplicably working for obnoxious people you hate, and if you choose one of these options then they all live and you never get to settle up with any of them. The whole game is reduced to a pointless wank. Yes, the central conflict is between Trevor and Michael. But your ending choice is to have Franklin kill one of themAlthough Michael shows up to help if you choose to kill Trevor. Still, the mission is played from Franklin’s perspective.. If this decision is going to hinge on the Michael vs. Trevor conflict, then shouldn’t it be settled between Michael and Trevor?

I’m obviously not against choice in games! In Mass Effect, the game offered us lots of choices. But when it came to the end, everyone was railroaded into accepting the premise of the story: Stop Saren and the Reapers. That was what the plot had been building towards and that was the expectations in the minds of the audience. I’ve heard a lot of criticism of Mass Effect over the yearsI might have written a little of it myself., but I’ve never heard anyone gripe because the game didn’t offer them the choice to romance Saren and help the Reapers. Grand Theft Auto V offers us no choices throughout the game, but then at the end it allows you to pick from three different endings, two of which make no sense in terms of story structure.

It feels like an odd choice to not have the smoking wreckage of Devin Weston's car visible in the frame. Still, that's a really nice shot.

So the kill Michael / Trevor choices don’t work as conclusions to the story we’ve experienced, they don’t effectively resolve the conflict between these two men, and they will be incredibly unsatisfying to the audience because they don’t resolve or pay off the conflict with our numerous antagonists. They feel like a spiteful “screw you” to players who chose them, which is baffling since:

Normally at this point in the review I’d say something to the effect of, “This money could have been better spent elsewhere.” But it’s not like this game suffered from budget constraints. You can’t look at the rest of the product and say it would have benefitted from more money. I don’t know why the team spent resources offering the player two thematically inappropriate and narratively unsatisfying options, but their inclusion doesn’t detract from the rest of the experienceI mean, assuming you don’t go and CHOOSE one of them..

Next week we’ll look at the overall (lack of) structure of Grand Theft Auto V and talk about the challenges of telling stories in a game with such a massive scope.

[1] Although Michael shows up to help if you choose to kill Trevor. Still, the mission is played from Franklin’s perspective.

[2] I might have written a little of it myself.

[3] I mean, assuming you don’t go and CHOOSE one of them.

The comments on most sites are a sewer of hate, because we're moderating with the wrong goals in mind.

Computers keep getting more powerful. So why do the population caps for massively multiplayer games stay about the same?

There's a new graphics API in town. What does that mean, and why do we need it?