Here we are at the endgame. Walker has defeated General Cross, but then she stood around and got coughed on. So now she has this nanotrite virus or whatever.

Walker falls over, and then Lily (remember her?)  appears out of nowhere and drags her to safety.

The obvious, surface-level problem is that Lily had no possible way to get here, no reason to expect that you would need her, and no way to extract you afterwards. The whole plot of this game was about acquiring the tools to get into this facility, so it comes off as absurdly lazy when another character gets in without any of those tools.

The more pressing problem is that this doesn’t work in a storytelling sense. We haven’t seen Lily since the tutorial and she hasn’t been an active participant in the story since then. It would be like having Trask show up and save the day at the end of KOTOR. We likely haven’t seen this character in ages and the writer hasn’t invested the time to make us care about them.

The game never gave the player any reason to revisit Vineland. Even if the player chooses to go back, Lily never has anything important to say. It makes no dramatic sense to have her suddenly appear here at the end like she’s the missing puzzle piece to this whole adventure. 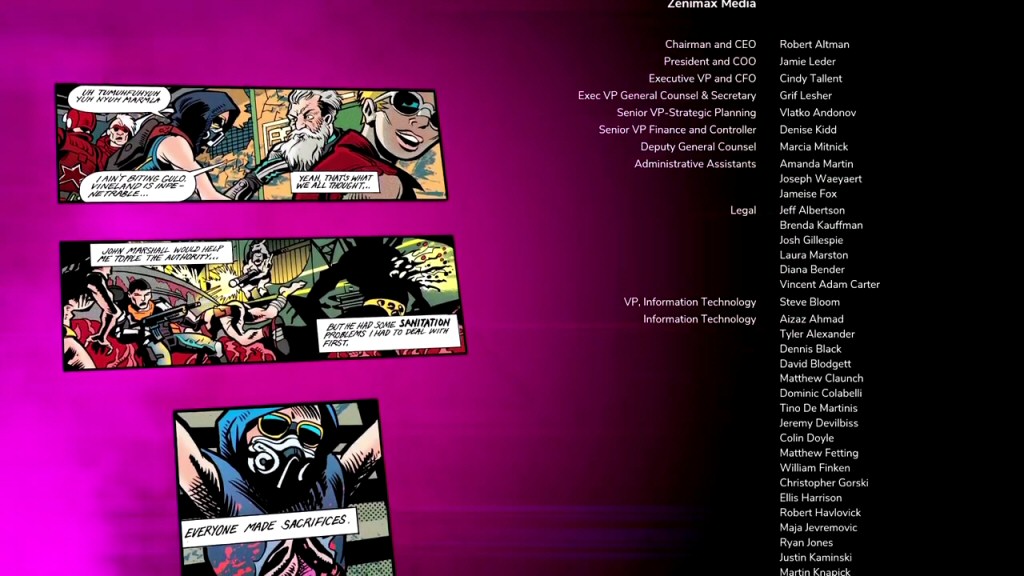 These comic panels seem fun. I wish this playful tone had been PART OF THE GAME, rather than the writer subjecting us to the disorienting tone-switching of this campy gross-out body horror wacky grimdark spoopy revenge schlock.

As a total aside, what’s the deal with fake-out endings in 2019? Last year we got:

(If you can think of any others, let me know.)

Another odd similarity: Both Borderlands 3 and Rage 2 had little comic panels scattered through the ending credits as a way of enticing you to stick around. The first game showed us glimpses of how the good guys celebrated their victory, while Rage 2 was just a recap of the story. I like both, although I think the first approach is more useful to the audience as it offers them additional closure. 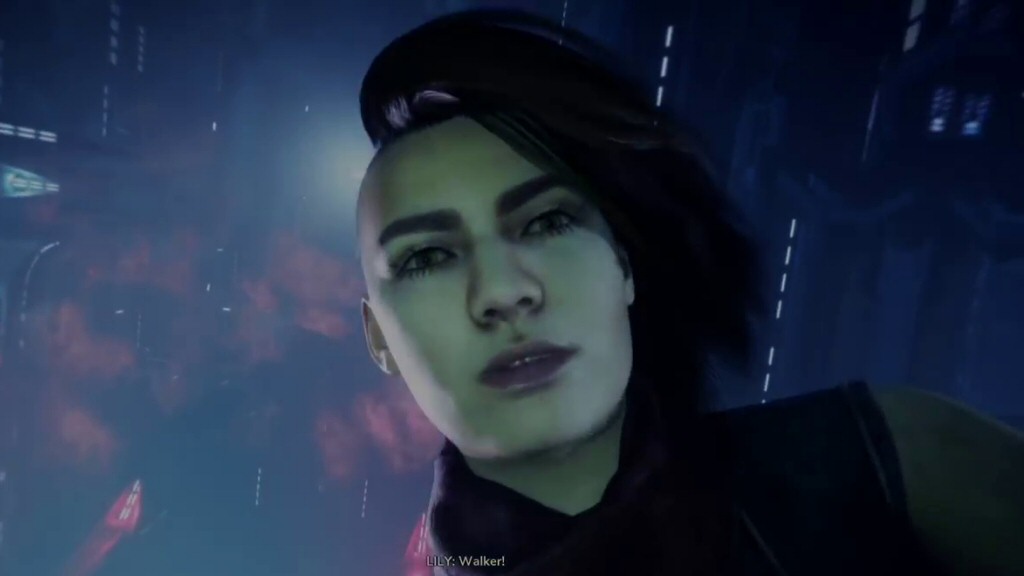 Oh hey, I remember you. You're that lady from the start of the game.

Anyway, getting back to the main topic: I think the idea of having Lily help out at the end is a good one. The problem is that the rest of the story didn’t lay the groundwork for it.

First of all, we need to make sure Lily is more connected to the story. Lily sits at the gates of Vineland for the entire game, which means that you never have a reason to talk to her after the tutorial. Even if you wanted to talk with her, the game makes it very difficult to do so.

All of the major towns in the game get a fast-travel point, except for Vineland. It’s tucked in the corner of the map and surrounded by a vast buffer zone of empty spaceThere are a couple of things to do in the area, but this is the most sparse area of the map in terms of open world activities.. So we need to…

Those are literally off the top of my head. They don’t all fit with the brash and angry version of Lily we see in the game, but the point is that the Lily we see in the game doesn’t have enough going on to carry the existing ending. These various suggested arcs are all different ways you could rewrite the character.

I want to stress that I’m not talking about adding a ton of dialog to the game. Arcs like these are incredibly simple. In fact, we’re basically talking about four additional lines of dialog for Lily, plus four additional reaction lines for Walker. The cost is trivial when compared to the overall size and scope of this game. The lines would need to be spaced out like so:

In a movie you could skip either #2 or #3, but here I think you need all of them to allow for the distracted pacing of an open world game where we might lose track of the plot for a few hours.

Salt In the Wound

At the end of a simple story, horribly told, the writer leaves themselves a mechanism to make the next game about the exact same plot with the same boring bad guy.

In a post-credits scene, Lily somehow drags your limp body to the opposite side of the map so Dr. Kvasir can have a look at you. Not only does the writer act like Kvasir betrayed you, but Lily seems to have read the script and come to that same unsupported conclusion even though she’s been out of the loop. She doesn’t arrive until your conversation with Cross is over. Walker doesn’t seem to be able to talk, but she takes one look at her sibling and somehow figures out what (nearly) killed you.

Once Kvasir saves Walker’s life, she holds a gun to Kvasir’s head and debates whether or not she should kill him. He argues that since he was able to cure Walker, that means that someone else could theoretically cure Cross. Therefore, he concludes, you still need him.

Just to rub salt in the wound, Loosum and Marshal stop by and re-explain the ending to Walker. Marshal says, “No more Cross clones to worry about… that we know of.” 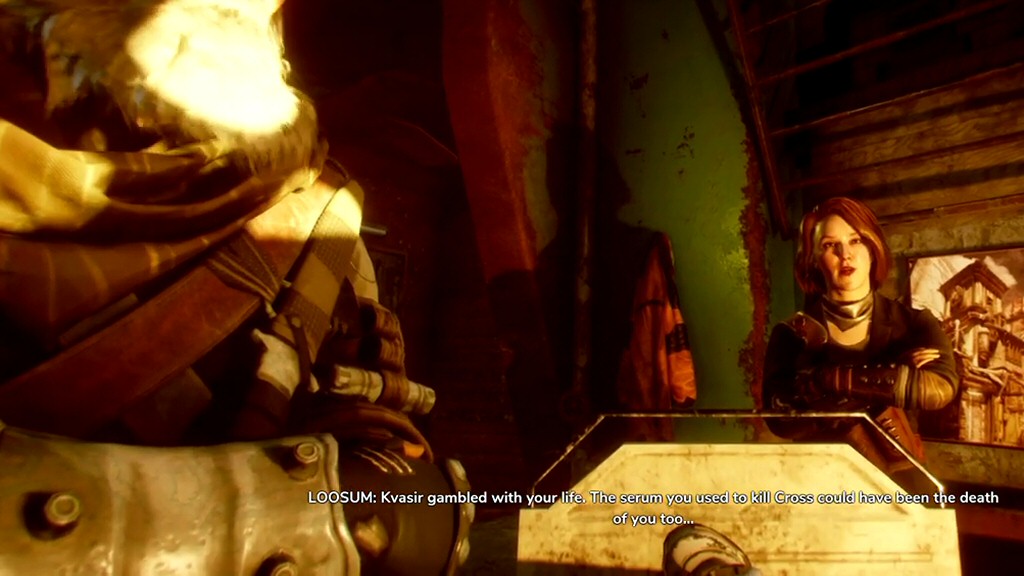 WHY are we spending precious dialog re-explaining what happened to Walker?!? Cross explained it. Then Kvasir explained more. Now Loosum is giving it to us again. It's not like she's recapping stuff from hours ago. These conversations are minutes apart.

I find it both alarming and sad that the writer felt the need to give themselves a back door to continue using Cross in future games. Cross is a one-note villain with a cliche design and nothing interesting to say. Like, even if you don’t have any ideas for the future, why in the world would you keep THIS character? The minimum-effort way to handle this is to introduce Rage 3 by saying there’s a new commander, GENERAL SCOWL, with a similar design and line delivery.

Hinting that the player’s hard-fought victory was ultimately pointless because you can’t even be bothered to invent a NEW cliche villain is a move of diabolical laziness.

How I’d have done it:

Instead of undermining the player’s victory by hinting that Cross might still be alive, just set up the sequel by stating the obvious: THE AUTHORITY is a huge organization and they’re not going to give up just because you killed their shouty-pants leader. Certainly someone new will assume leadership.

(Note that I’m not going to get into the problems with the existing ending, which leaves us with the question of: “If Cross was immortal because of the Clone-O-Tron, then why did we put so much effort into killing Cross rather than destroying the machine? If someone else becomes leader, then we’ll end up right back where we started!” That’s a complicated question that would require extensive re-writes to fix, and ultimately I don’t think it’s worth going to all that effort in this series to address some leftover fridge logic. I’m just putting this disclaimer here to acknowledge that yes, I am aware of this problem.)

Earlier in this series I suggested making the existing leaders Marshal, Loosum, and Kvasir be passive or complacent. This post-credits moment would be the point where they change their ways. They would admit that Walker’s proactive approach ultimately saved them. This change of heart would then impact their future plans. They’d talk about the need to expand outward and tame the wasteland instead of hiding inside their walled cities.

This would give the player a secondary victory. Not only did they neutralize the Big Bad, but in the process they’ve created reform that will (presumably) benefit the people of the wasteland and make society stronger and more adaptable in the future.  This would also give the leaders a bit of a character arc, which they’re lacking in the story as told.

So that’s the story of Rage 2. It managed to disappoint on every level. It was a barebones plot with a boring villain and paper-thin characters that were fighting over a world we have no reason to care about.

So why did I write this series? Why did I waste time beating this dead horse? I have one last post that talks about that.

[1] There are a couple of things to do in the area, but this is the most sparse area of the map in terms of open world activities.

 Rage 2 Part 8: What A Twist!Previous Post
Next PostRage 2 Part 10: Writing Matters 
From The Archives: