This post isn’t relevant right now. This post is for the benefit of people in the future. Whenever I complain about the difficulty of getting screenshots or footage from a game, I often get asked perfectly reasonable questions like these:

I get asked a question like this every few months by earnest and well-meaning people. I also get asked these questions by pushy and self-important recording platforms that assume they’re the first program to ever offer this feature and they just can’t IMAGINE how I survived before they came along.

So here is the complete answer to all of these questions, in a conveniently-linkable location…

I Have a System Already, Thanks

This is Microsoft's game "bar", which pretty well reflects their kitchen-sink apprach to application design. If you can't do something well, then try to do many things poorly.

I use BandiCam to record all screenshots and game footage. I have an entire workflow built around this system. I know what the hotkeys are, I can hit them quickly when I need to, and I know the hotkeys aren’t going to do anything to impact gameplayThe Microsoft Xbox Windows Game Bar Assistant Overlay – or whatever the stupid thing is called – is invoked by pressing WIN+G. In lots of games, G is also THROW GRENADE. It might work the way you want, or it might go very wrong. Do you feel lucky?. I don’t want to press record, watch a 10 minute cutscene, and then realize the recording didn’t happen because the hotkeys are different than what I’m used to, and then realize the game just auto-saved and I can’t get another shot at the cutscene without playing through the entire game again. Games take a long time to play, so the stakes are pretty high here. I need to be able to hit record and trust that the system will work. I’m usually concentrating on the game, and I don’t want to have to babysit an unknown system to make sure it’s capturing what I need.

Every game bar and recording software has its own defaults for storing things. Some put them in with the save files. Some will stick them in something like /photos or whatever. Others have their own special-snowflake places to put things. They usually store them in a common folder named something unhelpful, like “screenshots”, and the images will be named something stupid like screenshot1.jpg, screenshot2.jpg, etc. All of these programs default to saving things on my C: drive, which isn’t large enough to hold hours and hours of game footage from dozens of games.

BandiCam is part of my organizational system. I have an entire external hard drive dedicated to storing footage and screenshots. When I use Bandicam, I know that the material will go to that drive, I know that it will be saved under a folder named after the game in question, and I know the material itself will be named with a timestamp so I can sort them later. Yes, all files on Windows have a “created” timestamp, but that becomes useless if you have to copy the files somewhere else for whatever reason. Having the timestamp in the name means everything will be sorted chronologically, and will stay sorted. If I have recordings from multiple playthroughs, they won’t get all mixed together.

This naming system also fixes the problem where Windows will use naive file sorting and things will end up like:

If I need some Rage 2 screenshots a couple of years from now, I don’t have to remember which platform I played on or which random recording program I used, then figure out where that program dumped the files, and then work out what order all the videos and screenshots should be in. I jump to my capture drive and look under /RAGE2. That’s it. I know all video files will be in the same format, rather than switching randomly between competing types. When it comes time to make a video, I’ll know that all game footage is compressed using the same system and I’m not going to need to hunt for a converter for this semi-obscure version of an old video format. (Or a surprise new one.)

Also, lots of recording programs are either too invisible or too pushy. The Microsoft game bar loves to pop up at random times to announce that it recorded that thing you told it to record. I don’t know if those announcements would show up in game footage, and I really don’t want to find out the hard way. Other programs might not give you an indication if you’re recording or not. I don’t want to have to learn every system and all of its exceptions and eccentricities. When I’m using BandiCam, I can always see a frame counter in the upper left corner to let me know the program is ready. If it’s green, it’s idle. Yellow means it just captured a screenshot. Red means it’s recording footage. I know this indicator won’t appear in any of the captured material.

Most importantly, I know that when I stop recording I’m not going to get a stupid popup asking me which social media site I want to upload to. BandiCam isn’t ever going to pull me out of the game, ask me to log in, or tell me what people are up to on some stupid “friends list”. It stays hidden, does its job, and doesn’t get clingy when I haven’t interacted with it for a while.

Also, having the recording done by an external program is more likely to give performant results. BandiCam is specialized software that’s been in development for over a decade. It’s probably going to be better optimized than the tacked-on recording mode thrown together by a random game developer. It also means that I can keep recording smoothly, even if the game is struggling. This keeps the two systems isolated and prevents cascading failures. If the game crashes, I won’t lose my footage. If I run out of storage space for recording, the game won’t crash. 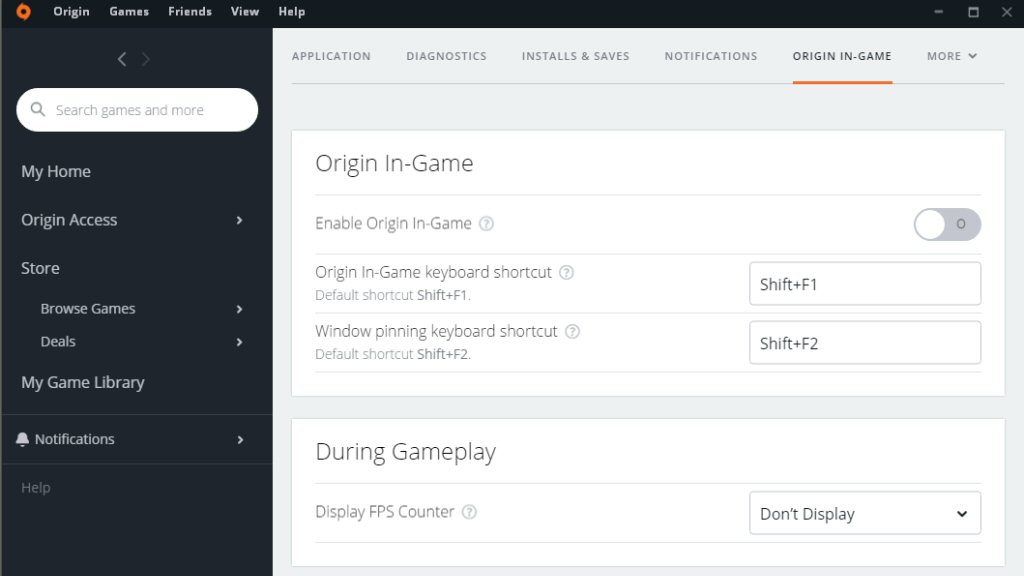 I MUST disable the Origin overlay, because it blocks all other recording software.

Also, often in-game screenshot systems exist to make screenshots that are pretty rather than accurate. Maybe they’ll do some post-processing to enhance the saved image, or the system won’t capture the HUD. If I’m trying to write an article about how confusing and over-cluttered the HUD is, then a bunch of screenshots without the HUD are useless to me. I want my screenshots to reflect the game as I saw it, not as the game designer wants to pretend it looks. I’m trying to critique the game, not market it.

I still haven’t found a system that allows for my absurd absent-mindedness. Sometimes I’ll start playing without hitting record first. Or I’ll remember to hit record but forget to hit stop and end up recording an hour of pause menu. There’s probably no fix for that, and I expect the problem will get worse as I get older. I was a scatterbrain in my 30s, so I can’t imagine what a mess I’ll be in my 50s.

Still, this is the system I’ve settled on, and deviating from it would cause chaos for me in the future.

Speaking of absent-mindedness: I just scheduled this post and realized it’s going to appear the day before Christmas. A technical and needlessly hostile rant on usability is perhaps not the best pre-Christmas greeting.

[2] The Microsoft Xbox Windows Game Bar Assistant Overlay – or whatever the stupid thing is called – is invoked by pressing WIN+G. In lots of games, G is also THROW GRENADE. It might work the way you want, or it might go very wrong. Do you feel lucky?

 Thankful to Origin Support?Previous Post
Next PostBethesda's Launcher is Everything You Expect 
From The Archives:

Bethesda felt the need to jam a morality system into Fallout 3, and they blew it. Good and evil make no sense and the moral compass points sideways.

44 thoughts on “I Don’t Need Your Stupid Game Bar”