(Apologies for being late with this one, I didn’t get in until very late Friday night)

Twenty-four entries is a lot to write about one game, even if it’s a very long one with two big expansions. So I’ve struggled to come up with something to say that can tie it all up. It’s not enough just to say “yeah, it was good,” because everyone already knows that.

So the thing I want to focus on is what this game means for the genre, because the AAA RPG space is shrinking. If we look at the major developers operating in it, we have:

So if you leave off the people that don’t do real AAA numbers (Obsidian and Larian), the ones trying to get that Destiny money (Bioware), and the ones that are Bethesda (Bethesda), that leaves CD Projekt alone carrying the AAA RPG torch. For the time being, at least, this is the template – and there’s a few things about it worth noticing.

They’re single-character games: Meaning you don’t have party members. In the Witcher games, Geralt would occasionally have someone like Zoltan or Keira Metz tag along for a quest here and there, but only occasionally. Most of the time you’re alone. Cypberpunk 2077, from what we’ve seen so far (above), looks similar: you complete a quest alongside a friend named Jackie, but he doesn’t appear to be a party member in the usual sense.

Personally, I think developers are missing a trick here. Single-character RPGs can get lonely. Players end up starved for some kind of companionship as they’re tramping through empty wilderness. Look how attached people got to Lydia in Skyrim even though she only had 5-6 lines of dialogue. It was just good to have someone else around.

Or another example: when I played Dragon Age: Inquisition, I was one of many players who periodically experienced a bug that made party banter shut off almost entirely – it would only happen maybe once an hour, or even less. It was startling how empty it made the game seem when it happened, and if the small army of people trying to find fixes for it online during that time were any indication, I wasn’t the only one whose experience was affected. Tromping around the Storm Coast for hours with a team of mutes just didn’t feel right.

Cyberpunk might not have this problem so much – it’s set in a bustling city, with plenty of people around. But I still believe that the presence of party members is part of the secret sauce that makes a good RPG work.

Novigrad was done well enough that I look forward to Night City.

They’re ginormous: The Witcher 3 was a certifiably ginormous game, with areas designed around the assumption that you had both fast travel and a horse that can sustain a full gallop indefinitely without ever getting tired. To fully complete the base game was easily an 80+ hour endeavor, and the expansions take it up into the 100-150 range.

This was mitigated by the remarkably high level of polish, but much of it was still busy work. Reveal all the various treasures and monster nests and you’ll have a map that wouldn’t look out of place in a standard-issue Ubisoft grinder. And while the Witcher contracts were never just fetch quests, play enough of them and you start to see the formula emerge: villagers are frightened of a local ghost or somesuch, Geralt investigates and discovers that it’s linked with some kind of tragedy in the past, uses his knowhow to draw the monster out, defeat monster, collect payment. They’re not all like that, but many of them are. 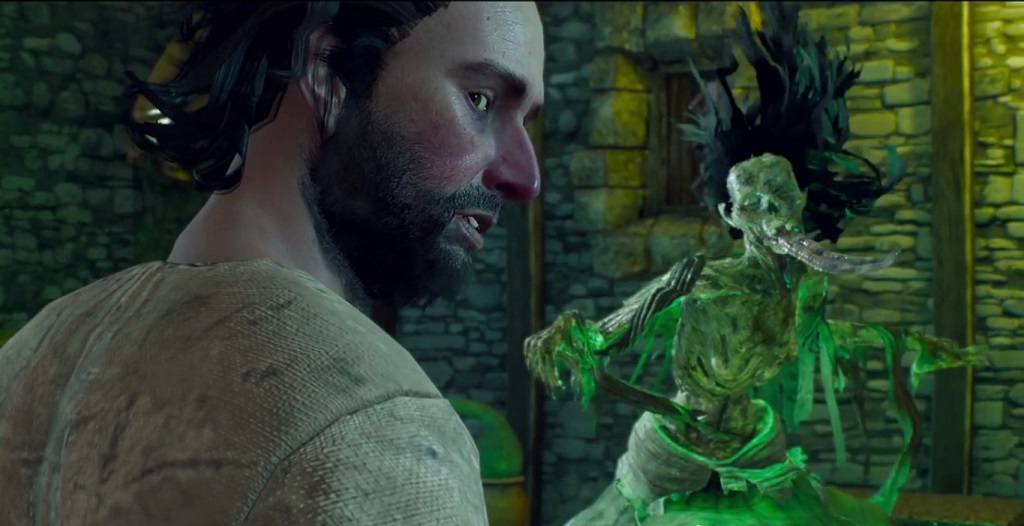 You know the drill, buddy. This curse ain't gonna break itself.

It’s inevitable that games this long and sprawling are going to get repetitive at some point. I understand the appeal of a long RPG. It’s a genre that asks the player to make a long-term investment in a character and a story, and we want to be able to reap the endgame dividends of that investment. And it only stands to reason that if we like something, we want more of it. But to me the insistence that RPGs be a minimum of hella long is handicapping the genre.

They’re actiony: Geralt spends much of his time hitting, dodging, and then hitting again, and based on the gameplay demo for Cyberpunk, it appears that it’s going to play much like a shooter in the combat bits. The days of a major AAA RPG being turn-based or even real-time with pause are long behind us. (When was the last one? The first Dragon Age?) I’m not sure who decided this would be the case. Changing industry habits are usually presumed to the effect of changing consumer tastes, but I suspect they’re partly the cause of them too.

Whatever the reason, number-crunchy mechanics are generally now subordinate to the conventions of whatever genre RPGs are trying to emulate. This is one area that CD Projekt has never been expert in. I’m a guy who loves to tinker with builds – I spend as much time reading character optimization and build forums as I do playing the game itself. But in the Witcher games I rarely tinkered at all. Leveling up sometimes felt like a chore.

One of the reasons I played a naked punchmage early on in the game was in an attempt to wrangle some interest out of the combat system. It didn't quite work. Mostly you just cast Igni over and over again.

This isn’t necessarily the case with real-time RPGs. Andromeda was a disappointing game in many ways, but I did enjoy the combat and build variety. I could play an engineer pet-type build, a mage-type adept, a stealthy sniper, or an ABC Always-Be-Charging vanguard, and they all felt distinct. Whereas the difference between a Geralt who specialized in light attacks and one who specialized in heavy ones often just came down to which one had the cooler-looking armor.

I can think of worse fates than playing RPGs from the likes of Obsidian in between big-ticket games to CDPR’s standard of quality. And while I share everyone else’s gripes about Bethesda, I still play their games in the end. CDPR and Rockstar have made fortunes off of single-player games – a category that was supposedly dying as recently as five or so years ago. I think and hope that the party-based, table-toppier RPG has another few rounds left in it.

And so conclude my thoughts on The Witcher 3. Thanks to everyone who read and commented, and to Shamus, and to CD Projekt Red for putting out a top-notch game. Here’s hoping they’ll put out another.

 The Witcher 3: Blood and WinePrevious Post
Next PostAnthem Demo Impressions 
From The Archives:

Bethesda felt the need to jam a morality system into Fallout 3, and they blew it. Good and evil make no sense and the moral compass points sideways.