Having knocked out Penguin and his goons, Bruce Wayne calls Alfred to request the delivery of the Bat-suit. Bruce climbs to the top of a building (this is the tutorial for the climbing movement controls) and obtains the Bat-Suit. During the climb, he establishes his goals for Alfred / the audience. He’s not trying to escape Arkham City. He’s not here to pick fights with the super-villains or their henchmen incarcerated here. Instead his goal is to figure out what Protocol 10 is so he can stop it.

The Bat-wing flies over and drops a pod containing the Bat-suit. It opens up to reveal…

Not only does the bottom of the cowl look like a giant grin, but the eye holes seem to suggest smiling eyes rather than the usual angry shape.

I’ve seen the Bruce-less Bat-suit in media before, but I’ve never seen it depicted in this way. The bottom of the cowl is yawning open like a massive grin. I think they had to cheat a bit to make this work. The inside of the costume ought to be dark, but instead it’s lit up with magical glowing blue fog to make the smile stand out.

It’s very reminiscent of the Joker and I’m sure it’s intentional. This game is supposedly Mark Hamill’s last appearance as the Joker (although he changed his mind later) and so the writer wanted to spend a lot of time talking about the Joker and his relationship with Batman. A lot of this is done in the style of “throw everything at the wall and see what sticks”.

The fact that the empty Batsuit looks like it’s grinning is one of those details that’s kind of funny but it doesn’t ultimately mean anything. However, it feels like it means something. Or that it should mean something. It’s the kind of visual cue that makes you want to project your own interpretation onto it. Woah man. Did you ever think how maybe Joker and Batman are like, the same? Sort of? Or… opposites? Like, if you think about it, maybe deep down Bruce Wayne is just as crazy as the Joker. Or maybe he’s more crazy, but he hides it under the suit. Or maybe the suit represents this crazy stuff in his head that he’s always trying to control. Or maybe…

It’s basically a game of “How do you keep a lit major busy?”

So now Batman is suited up and he has his goal. But before we go running off to punch Protocol 10 in the face, let’s talk about the layout of Arkham City. 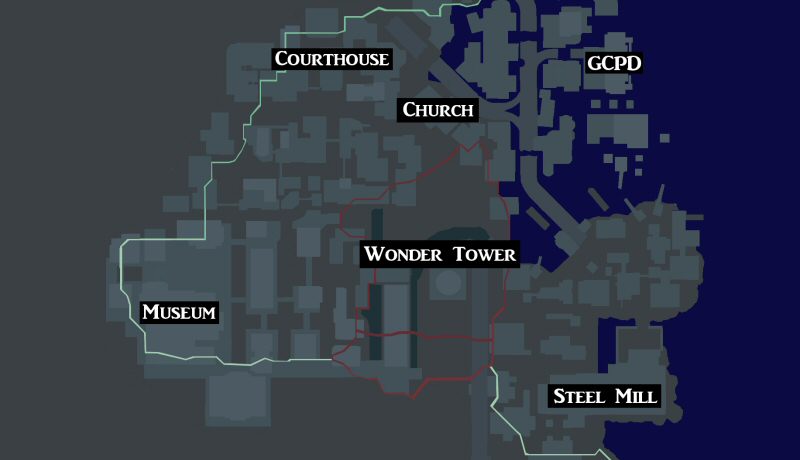 If you wanted to escape to the east, you'd need to cross nearly a half mile of water. Obviously that's impossible. There's even a line of buoys in the way. Just forget it.

The playable game area is roughly horseshoe-shaped, which can make it seem larger than it really is by having you travel from one end of the horseshoe to the other. (The game loves doing this.) The west boundaries are all ten-story concrete walls. To the east – towards Gotham proper – the only boundary is the bay. I’m not sure how that’s supposed to work. What’s to stop the prisoners from sailing across the bay into downtown Gotham? Yeah, helicopters patrol the water, but…

In the center of the horseshoe is the security zone where all the guards and helicopters and security systems are based. In the center of that is Wonder Tower, a spectacular tourist-y building that now serves as the headquarters of Hugo Strange and his Tyger Guards. This makes for some pretty good imagery. Dr. Strange is up in the tower gloating over his domain, while Batman is on the dirty streets below, fighting to save people and get answers before time runs out.

Several of the prominent buildings of the city have been adopted as bases by the various supervillains. The Joker stripped the amusement park and used it to decorate the steel mill, which makes for one of the most Joker-ish bases I’ve ever seen. Two-Face controls the courthouse. Penguin rules the museum. Poison Ivy has an old hotel. Bane is living in a toy company that’s half-sunk into the ocean. 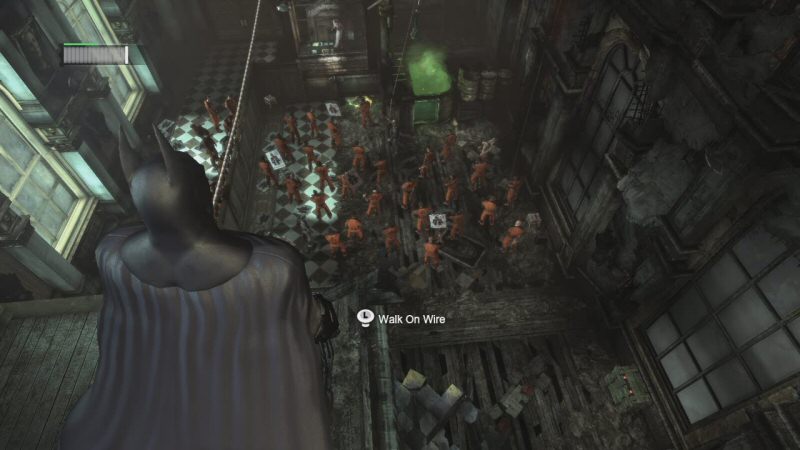 Top: Two Face is inside a shielded enclosure for the judge, like you find in courtrooms. To the right you can see Catwoman hanging over the typical vat of green acid. Batman is standing near the municipal tightrope.

So Batman has a goal: Stop Hugo Strange from enacting Protocol 10, whatever that is. He’s got his gear. He knows his mission. It’s time to Batman the shit out of this problem.

Obviously the thing to do is get into Wonder Tower and stop the whole show. But then again, Strange said that if Batman interfered, he’d tell the world his secret identity. It’s not clear what Batman’s plan is – or if he has one at all – but it doesn’t matter. He hears on the radio that Two Face has captured CatwomanYes, on top of all the other crazy things about this place, it’s also mixed gender. Poison Ivy and Catwoman are in here with everyone else. and taken her to the old Gotham courthouse where (it’s safe to assume) he plans to kill her after a show trial.

This is actually part of the Two Face recruitment drive. All the major supervillains are trying to build armies by attracting the rank-and-file prison population to their cause. Guys that join up with Two Face will wear Two Face masks where one side of the face is disfigured. Guys who join up with Joker will wear horrifying clown masks. Penguin’s guys don’t wear masks, but they all wear Penguin-branded black and white suits instead of prison orange. We learn later that Hugo Strange is supplying weapons to the supervillains, but it never explains who is behind Arkham City’s extensive costuming department.

Whoever is behind these costumes, I think they’re the REAL hero of this story. I love how you can tell which gang you’re dealing with just by their outfits. As the game goes on, you’ll find different gangs have control of places at different times. If you listen to the chatter and pay attention to the dead bodies you find you can follow the three-way power struggle going on between the supervillains while Batman is busy with the main plot.

At any rate, Batman dutifully flies off to save Catwoman.

The guards know Two Face is planning to publicly execute Catwoman in the courtroom, and Hugo Strange orders them to back off and 'Let Two Face have his fun'. Newsflash: Strange isn't here to run a reputable prison.

Once we get to the courtroom we get our first real full-sized brawl of the game, and then a cutscene where Catwoman gets free and Two-Face is neutralized. Afterwards, Batman asks Catwoman about Protocol 10. I have no idea why he thought she would know anything, but she doesn’t. At this point Batman might resume whatever plan he was going to enact before rescuing her, but someone takes a shot at her through the window with a sniper rifle. Batman saves her (again) and then he goes running off to catch the shooter.

Again, note how the actions of the other people in the story are driving his actions and preventing him from working on the problem the writer just now established as our supposedly central threat. If Two Face hadn’t tried to kill Catwoman, what would Batman have done? Tracked her down anyway and asked her? Would he have assumed Joker was behind the whole thing and made a beeline for his base? Neither of those sound like a particularly satisfying logical leap, but when you strip away the distractions that’s actually what he does.

Tell me everything you know about Protocol 10! I'm having trouble being a detective tonight and I was hoping someone could just explain everything to me.

This was his last chance to keep his mind on the job, because in a minute he’s going to get the mother of all sidequests.

He investigates the tower of the nearby church and finds a sniper rifle belonging to Joker. Then he phones up Alfred saying, “Joker is behind this!”

Dude! Hugo Strange already told you he has an evil plan he’s working on. You already know who’s behind the plan. Your goal isn’t to find the perpetrator, it’s to figure out what the plan is, remember? But fine. Go stick your head in the Joker hornet’s nest. Dummy.

[1] Yes, on top of all the other crazy things about this place, it’s also mixed gender. Poison Ivy and Catwoman are in here with everyone else.