Before we talk about what I liked, let’s talk about the things that disappointed, frustrated, or angered me in 2016. Er, the videogame things anyway.

Unlike those lists from other websites, this is not intended to be some sort of high-level, comprehensive, state-of-the-industry snapshot. This is just what I’ve run into. Since I avoid playing stuff I know I’ll hate unless it has Bethesda written on it, I don’t have a lot of things to hate.

I wish the game had more of this and less bludgeoning vagrants in dilapidated ruins.

I know it’s kind of unfair to list as game as a disappointment when it’s still in development and is likely to change a great deal before release. But after being thoroughly delighted by that introduction, I really was disappointed to discover the rest of the game had very little to do with those first few brilliant, unnerving, paranoia-inducing moments.

It might eventually evolve into an amazing survival game, but it’s not going to be (or even trying to be) a game about bluffing your way through a drug-addled Orwellian dystopia, which is where I thought it was going based on the first half hour of gameplay.

I suppose my problem isn’t that the game was bad, but that the trailer was just too good.

A remaster of a game that greatly increases the system requirements, added some new stability problems, is incompatible with the vast library of existing mods, and offers graphical upgrades so slight they border on being a placebo. The usual excuse is that “Bethesda gonna Bethesda”. That’s true enough, but acting shamefully should still get you shamed.

Shame on you, Bethesda.

WHAT YEAR IS IT?

Or as I like to call it, Games for Windows LIVE 2.0. The biggest improvement Microsoft could make to this product is to fire everyone who made it, delete the codebase, and write an apology for the original GFWL. We never got an apology for that shameful debacle, and I think we’re owed one.

There’s no excuse for a company this huge to make such glaring failures with regards to usability. The usual response is, “If you don’t like the store, don’t use it. I don’t see what the big deal is.” Maybe once in a while we’ll get a, “It works fine for me!” thrown in for good measure.

My problem isn’t just that Microsoft made a terrible product, but that this product is going to infect the industry for a few years. Sooner or later, a game I really like will end up on the Windows 10 store and I’ll have to choose between missing out or diving in. Microsoft is not a passive participant in the market, and sooner or later they’re going to try to compel me to use this stupid thing. They won’t do this by fixing their usability problems, but instead will try to hassle me into using the platform the way they pushed GFWL.

“Oh, you don’t NEED Games for Windows LIVE to play this game! It’s optional. You only need GFWL if you want to save the game.”

Also, Uplay continues to exist, for no discernible reason. Now that PC gaming is basically all-digital, I really want to see lots of competition among digital storefronts. But instead Ubisoft and Microsoft show up with annoying hassles and an intolerable sense of entitlement, like we’re supposed to be glad we get to jump through their stupid hoops.

At least we have Good Old Games.

2. Rise of the Tomb Raider

Holding pattern of the Tomb Raider.

I was pretty happy with the Tomb Raider 2013 reboot. I thought it was an interesting new direction for the series. I thought the first game was showing us how Lara become a hyper-competent, hyper-confident hero. But just a few hours into Rise of the Tomb Raider it was clear that Lara had simply jumped out of her old rut and into a new one. This wasn’t a bold new direction for her to grow in, it was a new status quo for her to stagnate in.

Maybe it seems unfair to say she’s “stagnant” after only two games, but the big problem is that this second outing doubles down on the mistakes of the 2013 reboot. I was hoping to see the formula gain polish with iteration, and instead the old irritations are more evident than ever.

The awkward story structure remains. It repeats the problems of the first game where it begins with a huge focus on basic survival and then forgets all about it and Lara reverts to being a superhuman that doesn’t need to eat, sleep, or keep warm. The story remains a huge focus and yet also persists in being thoroughly predictable and wholly uninteresting. The characters are serviceable instead of vibrant, which would be fine if the game didn’t stop the action every couple of minutes to have a conversation with them. The laser sauna section was horrendous trash. Lara’s greatest foe is still an incurable case of cutscene incompetence.

It’s like they’re copying the the Uncharted series, except they’re leaving out the witty banter, the fun relationships, and the likable protagonist. They’re copying everything from Uncharted except the most important part. 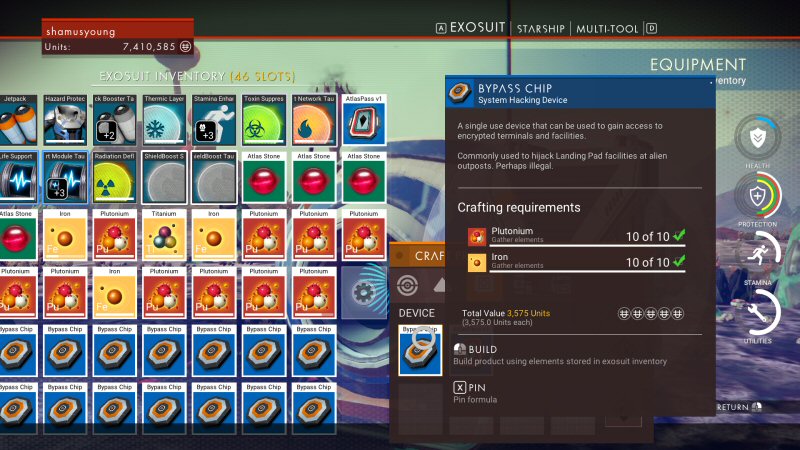 Well, the disappointments don’t get much bigger than this. I don’t have much to add after I spent three whole columns relentlessly cataloging the numerous flaws with the game.

The gameplay was shallow, ponderous, frustrating, and worked against the one thing the game did well, which was generating lots of places for you to explore.

The space combat was miserable, the inventory was maddening, the equipment upgrades were opaque, the resource collection was fussy busywork instead of a rewarding treasure hunt, the aliens were scarce and pointless, the ruins were all pretense and no substance, the landscapes rarely looked compelling, the progression mechanics were horribly unbalanced, the interface was an affront to usability, the trade system was a waste of time, the lore was balderdash, and the long-term goal (reach the center of the galaxy) was a sisyphean task that only served to highlight all the other problems with the game.

And all of that is before we consider the expectations inflicted by the pre-release hype.

About the only thing I can say in defense of the game is that I think there’s been too much hate directed at Hello Games and not enough aimed at publisher Sony. Either they had no idea what was in the game they were publishing (negligent) or they were complicit in a marketing campaign that vastly oversold the game. They paid for the TV spots. They got developer Sean Murray impressive and high-profile guest spots. They chose the $60 price point, which is fine for AAA titles but inappropriate for what amounts to an experimental indie tech demo.

Sony was happy to continue selling the game and helping themselves to their cut of sales while Murray took the brunt of the public outcry. When push came to shove, Sony was only too happy to throw Sean under the bus.

Yes, I’m aware it got a major update at the end of the year. No, I haven’t re-visited it since then.

Dead or Alive 5 Last Round

I'm not surprised a fighting game has an absurd story. I just can't figure out why they bothered with the story at all.