This is going to be a ~7,000 word series on someBecause listing ALL the things wrong with it would take 200 years. of the things wrong with the central story of Fallout 3. Yes, I know this is a celebrated and beloved game. It made a bunch of GOTY lists back in 2008, and still appears on lists of favorites today. To be honest, I liked it too. But that doesn’t mean I’m going to pretend that the entire story wasn’t a giant heap of sophomoric tripe. None of it fit together, none of it made sense, and it was filled with awful, frustrating situations where you were forced to do stupid things because doing something smart would resolve the problem without requiring the player to go out and shoot things.

If you’re one of those people that can’t stand to hear people say bad things about stuff you like, then this is going to be hard for you. I’ve broken the series into five parts to help soften the blow.

(Yes, I covered a lot of these points way back in 2010 when we covered Fallout 3 on Spoiler Warning. But I wanted a version of this rant that people could take in without needing to sit through 15 hours of 480p video.) 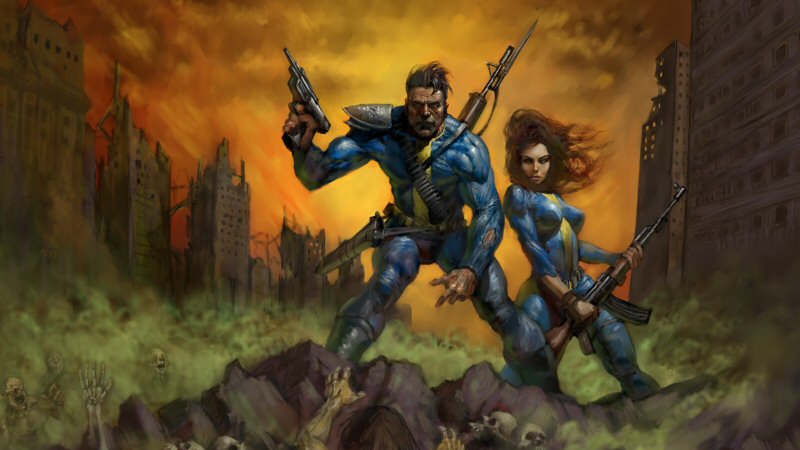 I loved the pulp-comic look of the art in the original Fallout.

The original Fallout game was a gritty world where you explore the vast California desert in search of a water purification chip. It drew influences from Mad Max, campy 50’s sci-fi movies, and pulpy comics of the same era. It had a streak of pitch-black comedy running throughout it. It wasn’t about the 1950’s, it was about the future that the 1950’s anticipated. It was a game that took place in the future of the past.

Bethesda saw this template and concluded that a Fallout game needed to take place in the desert, it needed to be about water, it should contain screwball comedy, and that it should be the 1950’s forever.

In Fallout 1, you needed a water chip to save the lives of your people who lived in an underground vault. In Fallout 3 you’re trying to clean water for a wasteland that you have no reason to care about, for people who seem to be doing okay without your help, because your idiot dad told you too. (Yes, Dad is an idiot. I know he sounds smart because he’s got the voice of Liam Neeson, and Liam Neeson can make anything sound brilliant, but trust me: Dad is a bone-head. We’ll get to him later.)

They tried to keep the “desert” concept, but moved the game to Washington D.C. where a desert motif makes no sense. They tried to keep the pulp sc-fi tone, but it was often undercut by Bethesda’s putty-faced NPC’s, horrendous washed out color paletteSay what you like about how primitive the 2D Fallout games looked, they had color that POPPED., and blunt attempts at photo-realism. They completely misunderstood the humor, replacing ‘dark comedy’ with ‘goofball situations’. And finally, the whole 50’s thing was greatly exaggerated and then rendered nonsensical by moving the timeline forward to 200 years after the war.

This fundamental misunderstanding of the Fallout tone and themes infuses the game and is the source of nearly every major design failing.

The original Fallout was a setting where we were just a single generation away from the Old World. People still remembered it, and it still shaped the way people thought. People were still sifting through the ashes, trying to cling to the ruined world. They were still dressing, speaking, and thinking like people from a retro-50’s future. But that tension between the old world and the new can only last so long. It certainly isn’t going to survive for 200 years.

Two hundred years ago, men wore knee-high stockings, powdered wigs, and got married at 14 years old. 200 years is a long time, and technology has transformed us and our culture in countless ways. The change would be at least that dramatic in the other direction, moving from a world of plenty to a world of ruin. To put it another way: 200 years after a nuclear war, people aren’t going to be forming greaser gangs.

200 years after the bombs fell, the old world should just be gone. But no. In Fallout 3 people still dress the same, stores still have Old World food on the shelves, the old machines still work, and people still talk about the war the way we discuss 9/11. Nobody has made any new music, culture, customs, clothingI guess raiders have their painspike armor. Which means the only culture to develop in the last 200 years has been from the psychotic cannibal raiders., or tools. They haven’t even swept the dang floor.

In this world the bombs fell, people crawled out of the rubble and formed little towns, and then nothing happened for the next 190 years.

Note that I’m NOT saying that the Bethesda writers should have made up some crazy future-world with all new cultures. If they did, it would barely feel like earth. It might feel something like Zeno Clash, but it certainly wouldn’t feel like the Mad Max / 50’s pulp sci-fi mashup the series is known for. I’m saying that they shouldn’t have moved the story forward 200 years. The Fallout world makes the most sense while you’ve still got some people around to remember the war. The farther you get from N-Day, the harder it is to maintain that unique Fallout flavor, the harder it is to conceive how society would develop, and the harder it is to justify having old-world customs, attitudes, gadgets, and food.

Why was this done? So that the events of Fallout 3 wouldn’t conflict with the events of the previous two games? This 200 year thing is a really ugly hack to solve that problem. And it was a waste, since they ended up retconning and altering lots of big ideas from the earlier games anyway.

Since the writer could barely make a single quest that didn’t implode under the weight of its internal contradictions, they should have made things as easy on themselves and just stuck to the “one generation after the war” idea the series began with. Like all the other missteps, it was a move that caused more problems than it solved and riddled the whole thing with plot holes.

EDIT: It’s been pointed out to me that the first game takes place ~80 years after the bombs fell. I was basing my timeline on the original Fallout Intro Movie, which states that: “Your family was part of that group that entered vault 13. Imprisoned safely behind a large vault door and beneath a mountain of stone, a generation has lived without knowledge of the outside world.” 80+ years is a bit longer than a “generation”, but there’s no point in arguing over contradictory lore. The point stands that in the world of Fallout 3, we have way too many years of nothing at all happening. Fallout 1 had Shady Sands and the Hub, places where humanity was scraping together some kind of new society. In this game people just sit in a pile of rubble, generation after generation.

What we’re NOT going to complain about.

I’m not here to pick apart the science of Fallout. I’m not here to go all Neil deGrasse Tyson on the retro-future fantasy science that the Fallout setting rests on. In the real world decontaminating radioactive water is supposedly not that hardSo I’ve heard. Never tried it myself. but if the writers say that radiation in Fallout sticks to water, then I can accept that just as easily as plasma rifles and deathclaws. I’m not asking for a simulation of real-world physics, but just asking the world stick to its own rules.

In short: It’s fine if green barrels explode like dynamite in Doom, but if a Cacodemon knocks over a glass of water I still expect the glass to hit the floor and break. Having “different” rules doesn’t mean a story has “no rules”.

I’m also not going to nitpick problems with scope or scale. Yes, two Brahamin is not enough cattle for a community of a dozen, a tiny garden can’t feed a whole family, and Tenpenny Tower is actually only a five-minute walk from Megaton. That’s fine. It’s all fine. We understand that in a videogame you explore on foot, some abstraction and compression of space is required. We can accept that a five-meter plot is “a farm”, five cows is “a ranch”, five houses is “a town”, and a mile is “a really long way”.

I’m also not going to complain about how stupid the Vaults areAside from that dig about greaser gangs I did a minute ago.. Yes, the politics and culture of Vault 101 are drivel, but it’s harmless drivel. Once you get out of the Vault it’s easy to ignore and doesn’t constantly generate more plot holes as the story goes on. Vault 101 is silly, not broken.

We’re also not going to complain about Little Lamplight, because that would just distract us from the task at hand. Yes, Lamplight is really infuriating, but like 101 it’s kind of self-contained. Besides, properly deconstructing Lamplight would take another entire article.

Next time we’ll dig into the setting of the game and look at where it all went wrong.

[1] Because listing ALL the things wrong with it would take 200 years.

[2] Say what you like about how primitive the 2D Fallout games looked, they had color that POPPED.

[3] I guess raiders have their painspike armor. Which means the only culture to develop in the last 200 years has been from the psychotic cannibal raiders.

[5] Aside from that dig about greaser gangs I did a minute ago.

Who Broke the In-Game Economy?

Why are RPG economies so bad? Why are shopkeepers so mercenary, why are the prices so crazy, and why do you always end up a gazillionaire by the end of the game? Can't we just have a sensible balanced economy?

Did you dislike the ending to the Mass Effect trilogy? Here's my list of where it failed logically, thematically, and tonally.

148 thoughts on “The Blistering Stupidity of Fallout 3, Part 1”