We rejoin trucker Travis Grady as he continues his journey to transcend stupidity itself. Last time he was wandering around the sanitarium, bashing monsters and developing his repertoire of dumb looks. Let’s see how it goes…

There are two new monsters to face here, and the differences between them are instructive:

Sweet mother of NASCAR, this gul-durned shadow is kickin' my backside somthin' fierce. (Sorry about the image quality here, but it is sort of hard to really capture a good shot of a shadow of an invisible man in a dark room while it's kicking your ass. Just trust me, this sucker is freaky.)

The first is a remnant. It looks like a not-particularly-comfortable restraining device. It seems to float through the air as if the wearer was invisible, but when you sweep the flashlight beam over it the thing casts a humanoid shadow on the wall and you can see its crazed movements and flailing limbs. Naturally the closer you get the larger the projected shadow will appear. And naturally this will freak you the hell out if you’re not ready for it.

The other monster is the carrion, a big lumpy… monster thing. Online guides say it looks like roadkill, but given how you need to fight the sucker at a distance and your flashlight beam has the coverage of a dinner plate, I’ve never actually gotten a good look at it. But this seems to be an exception to the rule that obscuring the monster makes it more frightening. I’ve never been all that scared of it. It just looks like a big lump to me. A big, mean lump with a cheap-ass lunge attack that can knock off half your health before you can say, “When was the last time I saved, anyway?”

The carrion is the larger and more dangerous, but the remnant is the one I dread running into the most. The way its shadow looms over Travis gives me what psychologists refer to as “the heebie-jeebies”.

Do consult the controls before you begin playing.

Eventually Travis starts uncovering secrets about his past. He’s tied to this place in an important way, and bits of his family history are buried here. This is exactly the sort of thing the game should have been doing right at the outset. The fact that I had to slog through three hours of gameplay before it became meaningful or personal is a major shortcoming. It’s the reason my previous posts have been crass mockery instead of analysis. The game has placed the cart about an hour in front of the horse by not giving me a reason to explore the Sanitarium until long after I’d arrived and been kicked around by its inhabitants.

The sanitarium is much larger than would seem necessary for a town this size. Either Silent Hill needed an extraordinary supply of places to treat the insane, or the place served a much larger area. Either way, there is a lot of territory for Travis to cover. There is also a lot of backtracking and fussing about with puzzles, as you do in these games. But we still don’t know why Travis is bothering with the place. It is revealed that:

Travis’ mother was an inmate here. She tried to kill Travis when he was a little boy, thinking he was possessed.

After trying to kill herself and her son in a fire, she was brought here, where she oscillated between mildly eccentric and flaming bonkers. She also claimed to be able to travel to another world through mirrors. 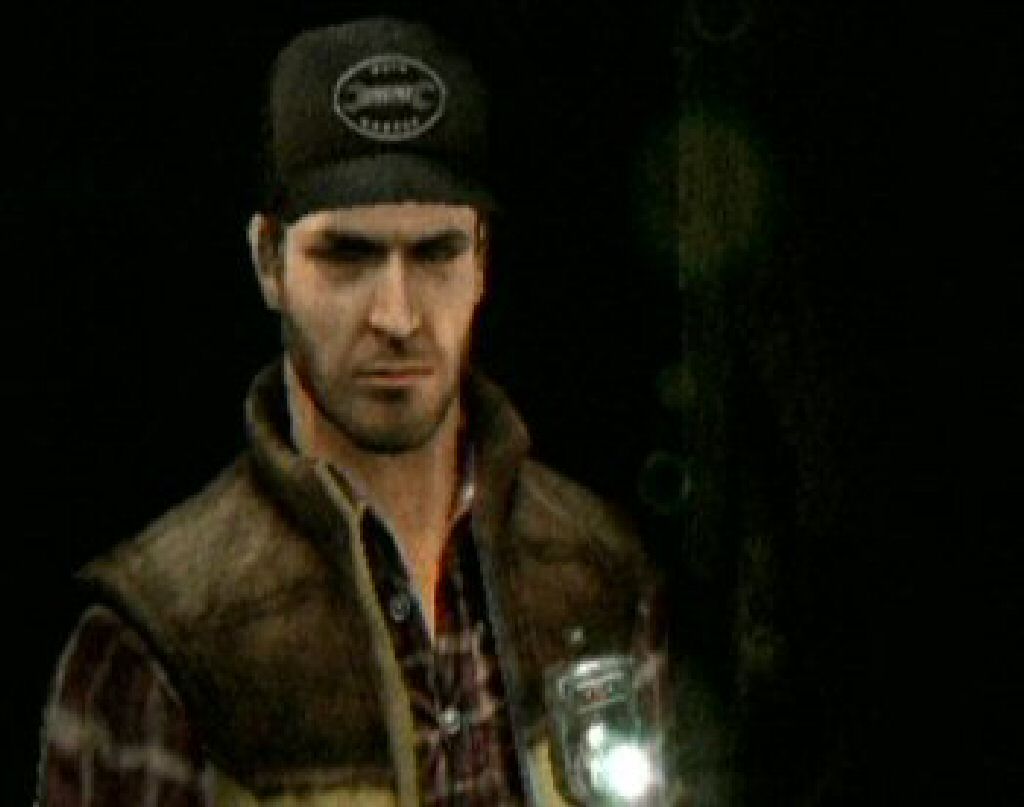 I haven't looked it up on Gamefaqs or anything, but I'm pretty sure Travis takes damage when he tries to think.

Now, that’s an interesting bit of family trivia, and if I were Travis I might sit still while someone explained that to me. But I wouldn’t really be keen on entering the ninth circle of hell and letting a menagerie of freaks chew my face off to learn it.

We can’t ever tell how Travis feels about all this. He didn’t have a good reason for coming here before this was revealed, and so we don’t know why he’s staying. I don’t need it all spelled out for me, just enough to make it clear that he is looking for something and that he feels strongly about it. I wouldn’t mind if his reasons were part of an ongoing mystery. I do mind that he doesn’t seem to have any reasons at all. Watching this guy amble through this rotten howling madhouse with a blank look on his face and no obvious goal is really starting to bug me.

What’s the deal, Trav? What are you doing here?

Combat is hard. These two or three at a time monster fights are just brutal. While Travis unloads his hardware store (last time I counted he was carrying three televisions and two typewriters) in the face of one of them, the rest gnaw his buttocks off. I’m not sure what I’m doing wrong, but I’ve made several trips to the Game Over screen by this point, and save points are spaced about a half hour apart, give or take. As I’ve said before, getting a game over is an immersion-breaking, game-shattering drag.

For me, part of the problem is how volatile and unforgiving combat is. Enemies hit hard, and just a couple of knocks can take Travis from hale to frail. He gets staggered for a long time when he gets hit, which means he’s probably going to take another hit. I emerge from most fights either unscathed or dead, because there’s not much room for small mistakes. Making an error in timing when facing two foes is very deadly. Earlier titles had the nickel-and-dime fights doing less damage. Over time it felt like monsters were wearing you down and driving you to the edge. The combat here is better at creating stress, (oh no! It’s been ages since I last saved!) but a good bit worse at creating suspense and hesitation borne of dread.

The game also seems to have abandoned the tense solitude I experienced earlier and replaced it with a Doom 3 style “monster in every room, two in the hallways” approach to level design.

Travis spends more time face-down in the sanitarium than is probably good for him, me, or my controller. But he's resilient enough with the help of the load screen to brute-force his way through the oddly-shaped forces of evil.

I can’t tell if my deaths are because I’m fighting things I shouldn’t be fighting or if I’m just not as proficient with the controls as the designers demand. I was able to beat Silent Hill 2 & 3 on normal difficulty, (I chickened out and went for easy in Silent Hill 4) but this game is just too frustrating. I’d take the coward’s way out and bump the game down to easy (I value my time far more than my pride) but there’s no difficulty adjustment. Unsurprisingly, this one-size-fits-all approach to adjusting difficulty doesn’t actually fit all that well. Oh, and the usual rules about cheat codes still hold true.

As frustrating as this is, I know there is a whole sub-group of players out there who want to crank the game up to super-extra-impossible because they enjoy the challenge, and those people are doubtless going to be bored by this. Those difficulty settings in other games exist for a reason, Konami. What were you thinking?

Look kid, everyone knows that rugrats like you have all the answers in movies and videogames. You're like, this walking plot-point oracle. So when you show up and don't say nothin' it really gets on my nerves. Now cough up the info before I tan your hide.

Between his guns, his blunt weapons, and his mastery of the save / load system, Travis shoves his way down into the corrupted guts of the sanitarium and finally defeats the ghost of his mother, taking the form of a tortured zombie in a spiked cage which turns the place back to “normal”. He also gets another chance to talk to the ghost girl that keeps cropping up. She never answers him, which makes me wonder why he bothers.

On his way out into daylight, Travis finds a movie ticket in the lobby. Right. Let’s head off to the movie theater for no reason!

This Korean title would be the greatest MMO ever made if not for the horrendous monetization system. And the embarrassing translation. And the terrible progression. And the developer's general apathy towards its western audience.

Ever wondered what's in all those quest boxes you've never bothered to read? Get ready: They're more insane than you might expect.