In the last post we discussed the Aen Seidhe, the Witcher universe’s name for the population of elves that was gradually overpowered by the arrival of humans. But they aren’t the only elves in the Sapkowski books. There’s also the Aen Elle, sometimes called the Alder Folk, who… weren’t.

Avallac’h, the mysterious elven mage – who, in the course of tracking down Ciri, we learn aided her escape from the Wild Hunt – is one of these Aen Elle. After dispatching Imlerith, one of the main story quests has Geralt accompany Avallac’h to the Aen Elle homeworld, a trip which sees the two of them using portals to travel between different worlds. 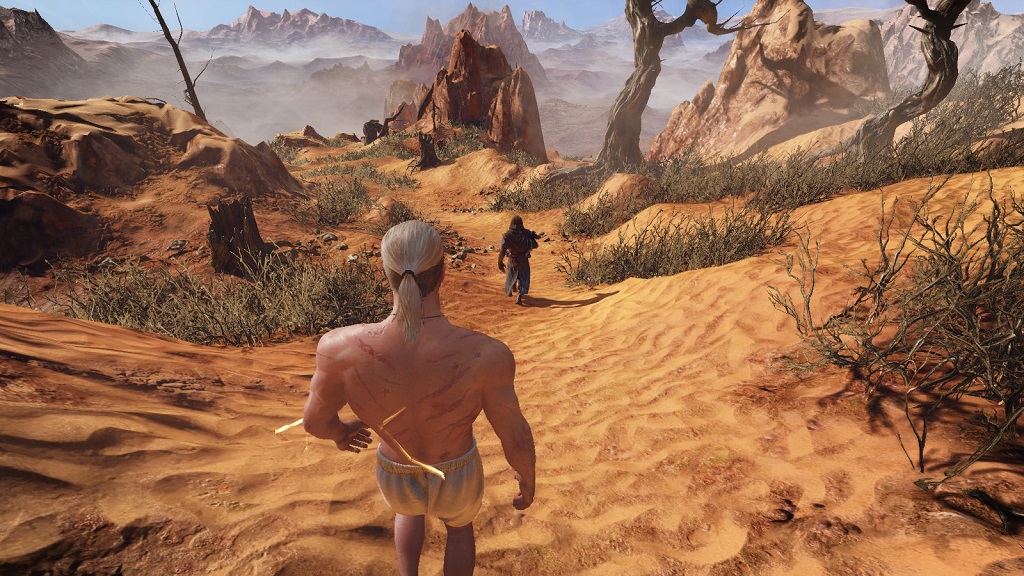 One of them is this desert, which Avallac'h says was once the bed of an ocean. The sequence is apparently a reference to a famous Polish science fiction novel called Solaris.

You might notice that things have gotten a little weird. Someone who has only played the games, and not read the books, might not be aware that there even are other worlds in the Witcher universe. It’s a surprising shift in tone from the blue-collar griffin/foglet bagging of a typical sidequest to an almost sci-fi flavored jaunt between worlds. The player isn’t given much warning, either – one minute, the quest log is telling you to talk to Avallac’h at Dandelion’s refurbished inn, the next, you’re hopping through time and space, traveling along something the game refers to as “the spiral,” which is barely explained at all.

At this point we’re going to start getting into things that could be called spoilers. It’s mostly cosmology and history stuff – it’s not as though there’s some big twist. But I’m going to put it below the link just in case.

I assume – without any real evidence, but nonetheless, I suspect, correctly – that the average player of the Witcher 3 has not read the books. Which means that the average player still doesn’t know, even well into the final third of the game, who and what the Wild Hunt even are. And this is not a thing that can be easily and succinctly explained. Even an abridged recounting of the history of the Aen Elle would take an essay unto itself to complete, so here are some bullet points instead:

The game never really gives us this information, or at least not in any clear, easily available way. That’s understandable, as learning it all at once would be a head-spinning exposition dump. Instead, it communicates the bare minimum: Ciri is special because of her ability to teleport. The Wild Hunt are a bunch of asshole evil guys who are trying to kidnap her. Furthermore – and this is tonally important – Ciri and the legacy she represents are an object of nostalgia for the elves. (And other long-lived creatures. One of the crones mentions in passing that “her [Ciri’s] blood reminds us of our youth.”)

A familiar challenge in RPG writing is the balance of story vs. backstory/exposition. A common critique of some RPGs is that they throw walls of text at the player, expecting them to be interested in what King Whosits did back during the War of Whatever and how that affected the Treaty of Whatsit. In the balancing act of “shoving gobs of exposition in the player’s face” and “getting on with the story and letting them figure it out on their own time if they want,” CDPR have very much erred on the side of the latter here.

Tir na Lia, capital city of the Aen Elle. Someone put a lot of work into this skybox that the player will only see for a few minutes. Things like this, I think, show much care CDPR put into this whole Witcher thing.

So much so, I think, that it’s surprising. I read the Witcher novels in between playing the second and third games, so I knew a lot of this stuff. But I expect someone who didn’t would be at least a little mystified by the end of this particular quest, which eventually sees Geralt and Avallac’h convince a high-ranking Aen Elle noble to agree to leave Eredin hanging out to dry in the upcoming showdown. But maybe players have a higher tolerance for uncertainty than most developers realize. Maybe, if you focus on the crucial parts of the story, the ones with the most emotional immediacy, communicate a convincing mood, and give the player the tools to further explore the lore themselves, you can get away with a bit of temporary confusion.

I say “maybe,” but the success and critical acclaim of the Witcher 3 seems to suggest that that is, in fact, the case, and I hope other developers learn from its example. This challenge was partly thrust on CDPR whether they liked it or not – they were adapting an existing property, one in which the characters know all sorts of things about the game world and its inhabitants that their players don’t. In a sense, their solution is a matter of trust. Trust that the player can decide for themselves which lore details they want to explore, if any, and which ones they don’t, and to not to become unreasonably put out when something happens they don’t immediately understand.

So that’s the lesson worth learning in this particular bit. I had some additional thoughts about Avallac’h and the Aen Elle, which I may return to before we’re done, but that’ll suffice for now. In the next entry, we start sprinting towards the endgame (of the main quest, at least, I’ll probably have something to say about the expansions as well). But first:

There are a couple things that have happened recently that are peripherally relevant to this series, that I should at least mention. One is that – if you didn’t already know – Netflix is making a Witcher show. This has been known for a while, but it’s still years away from release (the only info I could find is that  whooops as of 16 hours ago I guess it’s 2019, lucky us). However, it’s elbowed its way back into the news recently because Geralt has been cast: it’s Henry Cavill.

Yeah, that one. The Superman guy. (To me he’s the Charles Brandon in the Tudors guy, but I expect more people know him as Superman.) I admit I was surprised. Geralt has a good amount of grizzle to him, whereas Cavill (in most of his roles) has a face you could eat off of. But put a beard and some dirt on him and I can see it. Apparently he’s a fan of both the books and the games, and is eager to play the role, which is always nice. What’s nicer is that Sapkowski himself is personally involved.

Of course, this may be a disappointing mess one day. After all, I like the Game of Thrones books but not so much the show anymore. That said, this one won’t have the obstacle of running out of book to adapt – and, what’s more, the Witcher is stylistically suited to episodes much more so than GRRM’s works are. If anyone at Netflix is reading this right now and dying for my unsolicited advice, and I assume they are, here are some short thoughts:

The second notable thing is that CDPR released a 48 minute gameplay demo of Cyberpunk 2077. In case you haven’t already seen it, here it is:

Well, it certainly looks pretty, even with the youtube player notching down the resolution. It’s also more or less what I expected: Deus Ex-ish (the new ones, I mean) gameplay with a more colorful palette. Aside from that, I don’t have a strong opinion. If Cyberpunk 2077 ends up a classic, the things that make it a classic won’t really be evident in a pair of mostly on-rails sidequests like the ones they showed here.

I have this itching feeling – not a strong itch, just a mild one – that this game is running the risk of being all flash and no soul. In my experience you can never get two people to agree on what exactly the “punk” part of Cyberpunk means or is supposed to mean, but all are in agreement that it means something besides mohawks, robot arms, and leather jackets. And I couldn’t quite manage to get a sense of that something in this preview. That doesn’t mean it’s not there, or won’t be there in the final product – just that I don’t quite get it yet.

So that’s the potpourri over with. It’s interesting to see these two properties – both of which would have been considered at least somewhat niche even by nerd standards as little as ten years ago – having such a high profile now. It seems that, having exhausted the obvious choices like big-ticket comics and Lord of the Rings, creators are looking for the second-tier (at least in terms of popularity) geeky properties to adapt. I’ll be curious to see how well it works.

Anyhoo, I’ll be getting back to the game next time, see you soon.

 The Witcher 3: Snooty ElvesPrevious Post
Next PostNightdive is Still Alive 
From The Archives:

This series explores the troubled history of VR and the strange lawsuit between Zenimax publishing and Facebook.

Could Have Been Great

Here are four games that could have been much better with just a little more work.

61 thoughts on “The Witcher 3: The Aen Elle, and Potpourri”