I’ve been doing this game critic hustle for over a decade now, and one question that keeps popping up is, “Why are in-game economies so broken?”  How come nothing makes sense? You’re halfway through a game and you’ve got enough money to start your own country. It’s weird that your character has this much wealth, and it’s even more weird that you can’t really do much with it.

So people ask me: What’s the deal here? Can’t game designers create a properly balanced economy? Why do roleplaying economies always dissolve into nonsense like this?

The good news is, there is a reason for this. The bad news is, it’s your fault.

Or more specifically, it’s the natural result of a perfectly reasonable series of expectations on the part of the player, and those expectations lead inevitably to this absurd conclusion.

Breaking the Economy by Giving Players What They Want

And just so we’re being clear up front, I’m talking about an actual in-game economy where you earn loot through gameplay, and not the horrendous new style of “Economy” created by meta-currency and  microtransactions. The problems with those systems are fairly obvious. I’m thinking back to a few years ago, before the publishers turned our games into prize grabbers.

Anyway, the reasoning goes something like this: You’re playing some sort of RPG or whatever and you kill an enemy. Then you notice, “Hey, I just killed this guy. He’s obviously wearing armor, but the game won’t let me take it for some reason. Why is my character running around in a loincloth and leaving all this gear behind?”

We can imagine a game – or maybe you can think of a good example – where enemies always drop the gear that they’re using. That solves the visual absurdity, but now we have a new problem. You can loot any gear you like, but the shopkeepers in the game are more ruthless than GameStop. This makes the whole world seem absurd. I bring them all this expensive gear and they offer me next to nothing. I’m trying to save the world here, and the merchants can’t even give me a fair deal on equipment?

So let’s imagine a game where you can loot any gear that enemies are using, and that loot can be sold for a reasonable price. Now players can unload the goods they pick up and not feel like they’re being exploited by the people they’re trying to help.

But this means we have a new problem. Assuming your foes are well-equipped, then you’re going to accumulate a lot of stuff, and that stuff is worth real money. So now you’re going to want to carry a lot of it. Your next complaint is going to be that it’s really annoying and obnoxious to have to constantly run back and forth to town all the time to unload goods. Players aren’t going to leave all of this incredibly valuable gear on the ground. That’s just not how people behave in a video game world.

So next you ask the game designer, “Can’t you increase my carrying capacity? I know it’s unrealistic, but making six trips back to town to clear out one dungeon is really boring.”

This means we end up with a game where you can loot fallen foes, the loot is valuable, and you can carry a lot of it. At this point, breaking the in-game economy is a mathematical certainty.

Skyrim has one last line of defense against this, which is that shopkeepers have a fairly limited pool of money. From a simulationist standpoint, this makes sense. In the real world, your typical merchant isn’t going to have the money to buy dozens of weapons, nor will they have any hope of reselling them in a reasonable amount of time. Like, how many swords do the people of Riverwood buy in a year? It can’t be many.

Limiting the cash available to shopkeepers does make sense from a worldbuilding standpoint, but it doesn’t actually solve the problem of the player accumulating wealth too quickly. For one, it’s trivial to get around. The player can still unload their treasure by fast-travelling from one merchant to another until the goods are sold. Thus the game is incentivising a lot of boring repetitive menuing and sitting through lots of loading screens. It makes the game less fun without really making it more balanced.

(That’s not to mention the silly workaround where you can quicksave, attack a merchant, and then quickload, which will reset their inventory and replenish their money for some reason. I could go on a tangent about Bethesda’s bug-infested spaghetti code and their allergy to doing anything resembling QA, but that’s another article.)

The point is, a broken economy is a natural emergent result of the player wanting to loot lots of things that have value and sell them with minimal friction. It makes for a great game loop, but it does lead to the player accumulating ridiculous amounts of wealth. The problem is that whenever the game spawns enemies, it’s effectively creating goods out of thin air. Since mooks need to be infinitely respawning, the player can acquire an unlimited amount of goods. 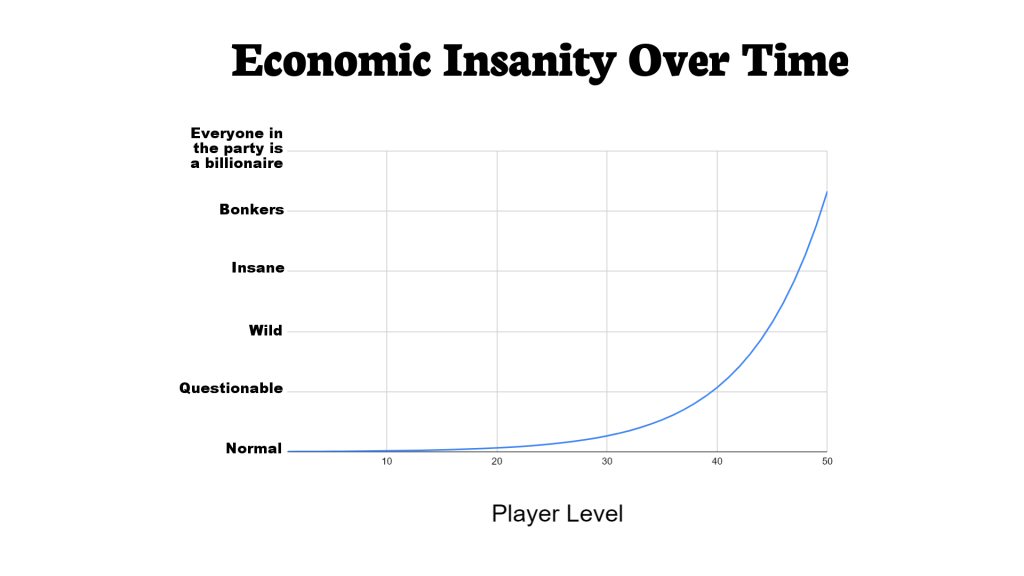 The Final Fantasy games exhibit a similar problem, except that 'bonkers' is the baseline.

This is made worse by the typical RPG progression system of escalating numbers. If the gear at each level is just 15% stronger than the preceding level, then by the end of the game your gear will be be doing more than 1,000 times as much damage as the starting gear. Players will probably expect that the price tag on these items will follow a similar curve. It’s pretty hard to build a coherent world around the idea that the bandits lurking just outside of town are wearing half a billion dollars worth of gear.

There are a few ways to design your game to keep the player from becoming the Jeff Bezos of bandit slaying.

I guess you could always just not have merchants in the game that will buy things from the player. No merchants, no insane wealth. The downside is that this cuts the player off from an entire gameplay loop, so that’s sort of like curing the disease by killing the patient.

If you’ve got a huge budget and an advanced degree in quantum economics, you could always go the route of EVE Online and build a fully functioning economy with raw materials, intermediate goods, and production facilities, and allow the prices to emerge as the result of market forces as thousands of real people engage in trade. That’s admirable if you can pull it off, but it’s probably not a viable solution if you’re trying to make a single-player RPG.

I think my favorite solution is to just have really good money sinks in the game. Allow the player to acquire lots of money, but then allow them to spend that money on upgrades with exponentially increasing costs. I realize that this runs into the jerk shopkeeper problem I mentioned earlier, but I think players can tolerate this if the goods in question are portrayed as being rare and exotic. What pisses people off is when a merchant tries to screw them over the prices of common goods they find by the armload during gameplay.

A good example of this is in Borderlands 3. I’m pretty indifferent to Borderlands 3 overall (I lost interest weeks ago) but I did like the storage deck upgrades that Marcus sells. Each tier of upgrade costs three times as much as the one before, and each upgrade makes a tangible difference to gameplay. That extra space really does feel nice when you’re picking up the huge piles of repetitive and uninteresting loot the game dumps on you. The escalating cost means you never get to the point where money is worthless. Even once I hit the level cap, I was still watching my cash and looking forward to buying the next upgrade. I guess being nominally a comedy game helps Borderlands get away with silliness that would be off-putting in a more grounded title.

The final solution to the problem is that we could always stop over-thinking video game economies and just enjoy the gameplay. And if you can do that, then more power to you. But that’s never been something I’ve been particularly good at. Over-thinking stuff is kind of my brand.

Anyway, that’s why in-game economies are so odd. The protagonist can defeat huge numbers of well-equipped foes and sell their gear for a good price. It’s makes for a fun game loop in a nonsensical world.

 The Dumbest CutscenePrevious Post
Next PostGamers Aren't Toxic 
From The Archives:

What is a skinner box, how does it interact with neurotransmitters, and what does it have to do with shooting people in the face for rare loot?

121 thoughts on “Who Broke the In-Game Economy?”