I posted this a week ago, but I did so after a video. A lot of people assumed the text was just a transcript of the videoProbably because I told them that’s what it was. and thus didn’t see this additional rant. So here it is again:

On Patreon, I announced that you can get your name in the credits as one of the reward tiers. The problem is that the Patreon reward system is needlessly obtuse thanks to the vanity of some obnoxious graphic designer. People keep getting confused because they want the $2 reward, but they want to give more than $2. They click on the “Name in the credits” reward tier, and it will LOWER their existing contribution to $2. Ridiculous!

This isn’t a hypothetical. This actually happened. To multiple people. Some of them emailed me for help, but others just shrugged and moved on. This interface design actually cost me a little bitLike, $20 to $30. Not the end of the world, but just enough to be annoying. of support.

Someone is so enamored of their sexy layout that they’re willing to sacrifice usability. It looks like this: 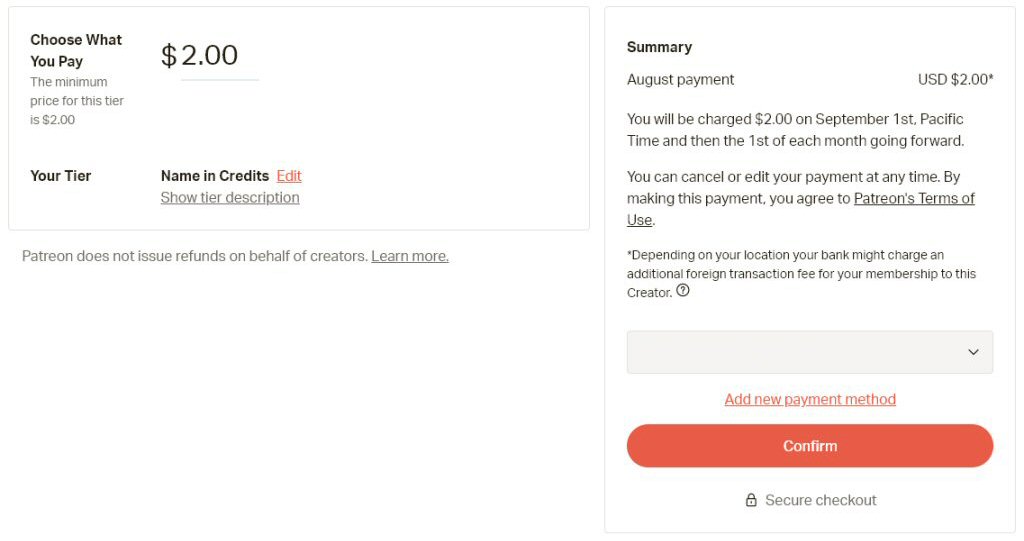 It’s not obvious, but that dollar amount in the top-left is an edit field. You can just change the number when you sign up. Before you hit “Confirm”, just click on the $2 and change it to whatever.

The problem is that there’s nothing to indicate the $2 is an edit field. For proper usability, it ought to look like this:

I realize that’s not as sexy, but sexiness shouldn’t be the top priority for a page designed to handle financial transactions.

Everything I just said goes double for you. Your once-intuitive interface is now attractive and horrendously inconvenient. These are not the priorities of a proper financial institution. I know it’s not Web 2.0 sexy to have your interface look like an accounting ledger, but that’s how your website should look because that’s what it is.

Sorry. Back to Patreon. My UI suggestions for Patreon:

I actually dislike the entire “tier” system of rewards, because I’d like people to be able to pick and choose.

Let’s say I have these rewards:

So then someone wants a soap carving but they understandably don’t want me singing their name in public or sending creepy love letters because that might cause some problems in their personal life. Maybe they want the love letter but not the song. I’d actually need to set up a complex matrix of options for all the permutations of rewards: Song only, letter only, song and letter, figurine only, figurine with song, figurine with letter, and all 3 combined. This complexity will quickly escalate out of control as the number of rewards goes up, and users will need to read through all of them to find the specific option they’re interested in.

Obviously this would be confusing and terrible, so typically creators structure things like Tier 2 includes all the rewards from tier 1, tier 3 includes all the rewards from tier 2, and so on. I suspect this winds up being a lot of extra work for creators. Someone wants the $20 reward, but that automatically qualifies them for the $3 postcard. So then the creator winds up sending them a postcard they don’t particularly want or care about.

I think a better system would be for the interface to simply ask for a donation amount, and below that would be a list of all the stuff available at that level. They can then enable or disable items individually.

To be clear: I only offer one reward so the above suggestion doesn’t apply directly to me. I’m just saying how I think it ought to work and how I’d like it to work when I’m supporting other people.

I’ll admit my suggested system can’t do branching options like, “For $5 you can have a signed picture of me OR a picture of my cat.” I’ll admit this is complicated stuff and it’s very hard to design a system that can meet the needs of every creator. But regardless of what system is used or how it works, the #1 interface priority should be to make things as simple and as clear for the supporters as possible. Even if it’s complicated for the creator on the backend, it should still be clear for the people putting their money in.

Anyway, sorry for the confusion and hassle. I guess I should link to my Patreon at this point. Thanks for reading and thanks for the support.

[1] Probably because I told them that’s what it was.

[3] If a smartass asks for me to do it with liquid soap, I’ll just send them a handful of soap. They can’t prove I didn’t carve it.

 No More TwitterPrevious Post
Next PostThankful to Origin Support? 
From The Archives:

Internet News is All Wrong

Why is internet news so bad, why do people prefer celebrity fluff, and how could it be made better?

Lists of 'best games ever' are dumb and annoying. But like a self-loathing hipster I made one anyway.