A few weeks ago on the podcast, I mentioned that I’m a sucker for abstract shapes, neon lights, and electronic music. I have a large collection of 2D platformers that contain these elements. I don’t really care for 2D platformers and I’m actually terrible at them, but I keep buying them anyway because I like the music and visuals.

It’s entirely possible that I have a problem.

In the comments, someone suggested that I give FRACT OSC a look. I tried to buy it on Steam, but discovered that I already owned it. No doubt it fell into my cart during a Steam sale of years past and I never got around to playing it. According to my email archives, I bought this thing back in November of 2014.

Five years later, I’m finally getting around to playing it. I’ve spent about two hours with Fract OSC so far, and I have to say this is a very strange title.

The Puzzle is Finding the Puzzle

Is this a puzzle?

FRACT is a puzzle game. You wander around an abstract world of neon lights and solve puzzles to activate machines that play music.

In your typical puzzle game, the player is given some kind of direction or structure. Sometimes it’s overt, sometimes it’s subtle, but one way or another the developer will present the player with some basic ideas:

It's all lit up and playing music. Does that mean I solved it? If not, then what's my goal? Is this actually a puzzle, or just a toy to let you map out notes for giggles?

FRACT doesn’t really have any of these. I know a lot of people – myself included – gave The Witness a hard time for being aggressively obtuse, but Witness practically holds your hand compared to FRACT’s meandering indifference. FRACT never gives you a moment of clear direction like sticking you in front of puzzle beside an obstacle and allowing you to overcome the latter by solving the former. You don’t know where you’re going, what your goals are, what the puzzles look like, how their mechanics work, or even how to tell you’ve solved it.

Hey, this geometric shape opened up as I approached. Is this a puzzle? What am I supposed to do with it? Is this just scenery?

Hmm. This thing with sliding blocks around is clearly a puzzle, but what’s my goal? I don’t see any locked doors nearby. I have no idea what I’ll get if I solve this. Moreover, I can’t tell if I have solved it. I pressed the thing and stood on this other thing and then music started playing. Is that solved? Nothing seems to have changed. Am I supposed to walk around this huge open area looking for an open door now, or am I supposed to keep doing… whatever this is?

Okay, that’s solved for sure, because the music got fuller and the puzzle itself deactivated. But I have no idea why that was the solution. I was just pushing buttons and experimenting and suddenly I’d won.

An elevator carried me up to this new area. Is this all going somewhere? Do I have a long-term goal? All of these buildings look more or less equal in terms of complexity. Can I do them in any order? Is there an intended order? Is there a really big door around here that will open up if I solve all of these? Is this huge chamber the entire gameworld, or am I inhabiting puzzle world 1 of 99?

For the record, THIS is what it looks like when you solve a puzzle.

I stuck with it and did manage to figure out a few basics. Some puzzles grant access to other areas, and other puzzles unlock new tracks / instrument parts that you can play with in the giant music mixer at the start of the game. I solved a few puzzles and unlocked a couple of mixer parts. They were fun to play with, but the puzzles fell completely flat for me. I never got any satisfaction from solving them because I felt like I was blundering into the solution without understanding the goal. The whole thing was so aimless that I wasn’t really getting a sense of progression or anticipation.

I walk into a room and fiddle around with sliding blocks. Sometimes a thing lights up, but I can’t tell if the puzzle is solved or just in a new state. After fumbling around I sort of accidentally solve it without understanding my goal. The circular platform in the middle of the room lights up. I stand on it and press the gizmo, and it carries me up to a new area.

The problem was that I wasn’t aware that my goal was to go up. I wasn’t aware of the room above. If the game had somehow showed me the room ahead of time then it would have created a sense of curiosity, so when I finally got there it would feel like I’d solved a mystery.

If the game had made the elevator a recognizable thingBy using similar-looking devices elsewhere instead of making everything abstract. then I would have spotted the elevator and recognized it as a goal. Then I would have understood what the puzzle was for, and I’d get a sense of accomplishment when I finally reached the solution. 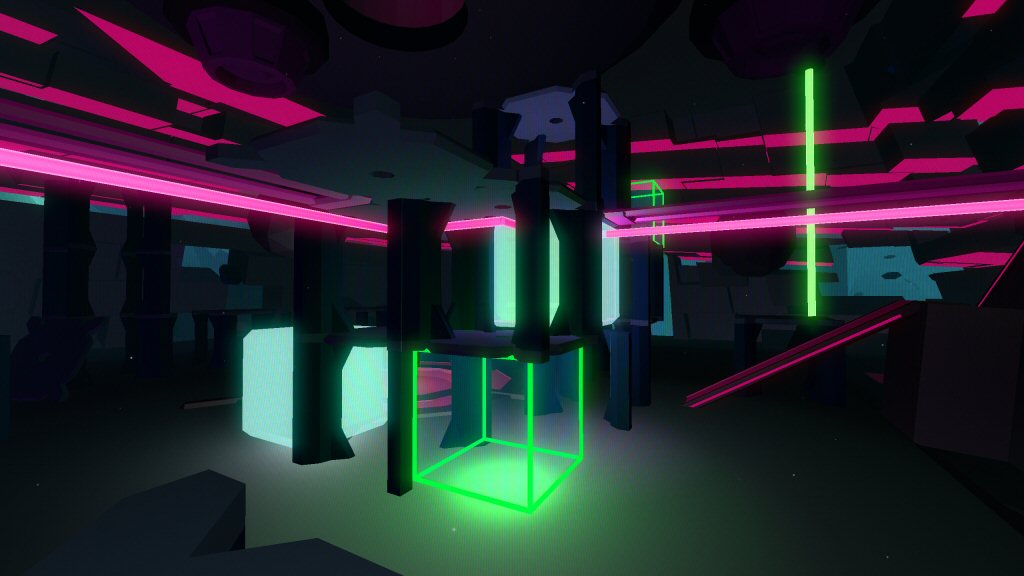 I don't even know what I'm supposed to be trying to accomplish.

I don’t know. It’s entirely possible that this ultra-obtuse design was intentional. There’s nothing inherently wrong with presenting the player with a bunch of random shit and leaving them to figure things out for themselves, but this experience was too disconnected for me. I think my ideal puzzle game falls somewhere between the extremes of “Here are the numbered puzzles presented in a fixed menu” and “Am I playing the game yet? I can’t tell.”

It’s not a bad game. The abstract environments are kind of cool and the arcade-style DAW is fun to play with if you enjoy electronic music. The puzzles are fine if you don’t mind hunting for them. It’s a charming game with wonderful brain-tickling music, but the moment-to-moment gameplay is a bit too abstract for my taste.

[2] By using similar-looking devices elsewhere instead of making everything abstract.

How I Plan To Rule This Dumb Industry

Here is how I'd conquer the game-publishing business. (Hint: NOT by copying EA, 2K, Activision, Take-Two, or Ubisoft.)