Back when CDPR first announced that there would be a pair of expansions – and even used the word “expansion” instead of “DLC” – I predicted to myself that one or both of them would be better than the base game. I personally feel that prediction has been borne out, though it’s an issue about which reasonable people can disagree. The prediction was based on my experience with RPGs, and specifically with RPG content made by a studio that already has a game or more’s worth of experience with its tools under its belt.

For those who aren’t conversant in the vocabulary of baseless game development speculation as I am, I’m using the word “tools” here to describe all of the various software used to make the game. To cite one example, Valve had something called the “Hammer” editor, which I used in the mid-late-2000s to make terrible attempts at Half-Life 2 levels. Most of the most commonly used game engines – say, Unity or Unreal – have comparable editors, along with ways to manage dialogue, combat, and everything else. 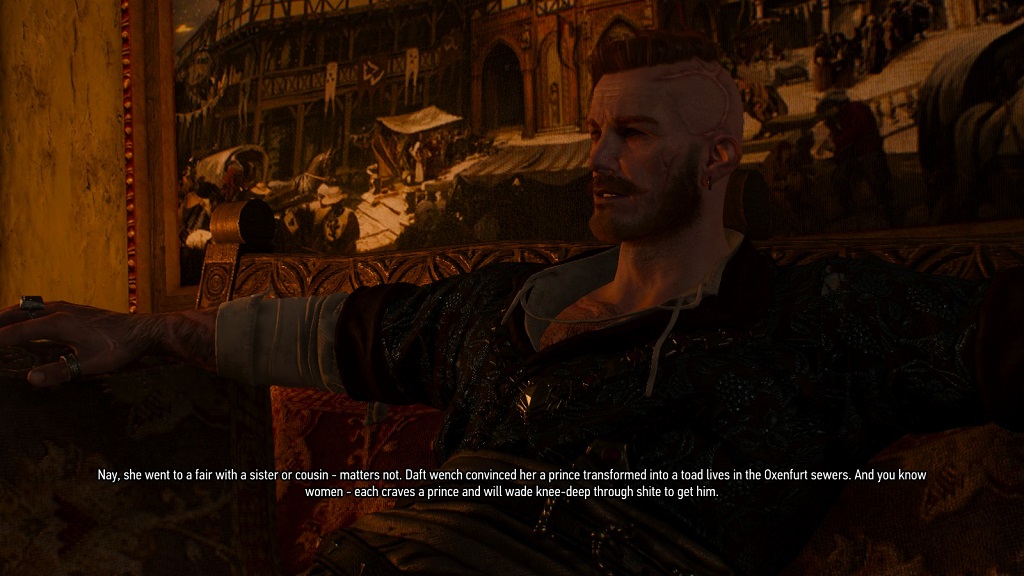 Olgierd von Everec. You can't tell at this resolution, but he has a heart of stone.

They’re the things at the end (or near the end) of the game development pipeline, and it stands to reason that as developers get more practice with them, they become more skilled with them. It can be something as simple and becoming fluent in all the hotkeys and shortcuts, to something as advanced as learning clever workarounds to get them to do things they’re not quite designed to do. To top it all off, I expect developers get just plain faster with them, and able to create and iterate more content in the same amount of time.

Two of the most obvious examples I can cite off the top of my head are the Baldur’s Gate series and the expansions for Fallout: New Vegas. Most people who have played both will agree that Baldur’s Gate 2 was better than the first, and most who have played the Throne of Bhaal expansion will say it’s at least equal to the base game. And for me personally, Fallout: New Vegas’ expansions (Dead Money, Honest Hearts, Old World Blues, and Lonesome Road) were overall better than the base game.

Other examples of this pattern are somewhat apples-and-oranges, like Fallouts 1 and 2. (You can tell they were more adept with the tools in the second, but there’s an argument that the first is the better game, with the more economically told story.) Either way, there’s always a part of me that gets suspicious when I learn that a studio has changed engines in a sequel, or is developing their own engine. I don’t know enough about game development and engine limitations to actually second-guess these decisions, but that doesn’t stop me from doing so anyway, even if only in my head.

However, I suspect that these improvements in quality aren’t only due to studios becoming more adept with their tools. I always get a palpable sense of freedom when playing expansions, like the developers have thrown off at least some of shackles binding them to AAA RPG convention. In an expansion or DLC, you don’t have to save the world, because presumably it was already saved in the base game. You don’t have to bow to pressure to make everything Big and Epic and Important, or spend time crafting set pieces designed to wow the E3 previewer crowd.

The final suspicion I have is that there’s less crunch when you’re putting out expansions, resulting in a higher-quality product. I can’t really substantiate that, but I suspect it anyway.

In any case, Hearts of Stone ticks all of the boxes I just described. It’s surprisingly big for an expansion that retails for ten bucks, having not only the main storyline (which is probably 8-10ish hours long), but also the Ofieri runewright quests, a fairly big new section of map in the northeast corner, and several new sidequests and Witcher contracts. It has a story that’s built around personal relationships rather than an impending magical apocalypse. Last of all, it lets its hair down more than the base game did. One quest in particular is practically an extended comedy routine.

No one since the crones has made me this nervous for Geralt.

I know this guy is memorable because I actually remembered him. Geralt actually met him briefly in White Orchard during the game’s prologue, and I remember him being conspicuous and a bit unsettling even then. I went into the expansions as spoiler-free as I could manage, but I didn’t manage to not learn that O’Dimm was involved – that said, even when I saw the image that spoiled me, I recognized him right away: “that was that weird mirror guy from White Orchard!”

For those that haven’t played it, I should probably rewind a bit here. The expansion’s main questline starts with a suspicious fellow named Olgierd Von Everec putting up a contract to kill a giant frog monster in the Oxenfurt sewers. The frog is, of course, rumored to be a prince, a rumor that’s confirmed once Geralt kills it and soldiers from his home country of Ofieri show up to arrest him for murder.

The old “I thought he was just a normal frog monster” defense apparently doesn’t fly with them, and Geralt is put on a ship to be transported back to Ofieri for a public execution. Gaunter O’Dimm shows up outside Geralt’s cell, offers to set him free, burns a mysterious mark onto his face, and causes the ship to run aground, giving Geralt the chance to escape.

Ow! I thought we were friends!

O’Dimm asks Geralt to meet him at a certain crossroads back in Velen, where we learn that he and Olgierd have some sort of deal, which has resulted in Olgierd being immortal. By this time the comparisons between Gaunter O’Dimm and folklore about the devil has been laid on pretty thick, but the game never (in my opinion) gets quite too on the nose with them. O’Dimm isnt just the devil showing up in the Witcher universe, he’s a Witcher-style take on the devil, with enough differences and ambiguity to keep him novel and mysterious.

He also speaks well of CDPR’s creativity and writing ability. Gaunter O’Dimm is, as far as I know, a completely new character who’s unique to the games. The Witcher series has generally had good writing, but it’s always been writing that’s piggybacked off the tone and worldbuilding of the Sapkowski world they’re adapting. I consider him to be an encouraging sign of the studio’s ability to tell interesting and affecting stories without using Sapkowski’s work as a jumping-off point.

I have another point I want to mention, and that’s the combat. I’ve often been critical of the game’s combat in this series, considering it to be competently enough done but rarely interesting. Hearts of Stone is a step up. For one, they noticeably tuned up the difficulty. Even with me slightly overleveled, the fights with the toad and the Ofieri sorcerer were pleasantly difficult without feeling punishing or unfair. They rewarded patience and positioning: the sorcerer has a tornado-like ability that can stunlock and two-shot you, and standing right in front of the frog at the wrong distance triggers a nearly telegraph-free tongue attack. What’s more, button-mashing is not rewarded during either – instead you have to defend, get a couple hits in, and reset. Without proper tuning, this would make the fights too long, but they didn’t feel that way to me.

In addition, the swarming tactics of the new “arachnomorph” enemy type were a welcome bit of variety. The other boss fights were not quite as good, but they featured health-regenerating gimmicks that kept them at least somewhat interested. In these fights the player can see a glimpse of what the combat of the base game could have been with a bit more tuning and variety.

I hardly got into the story at all this entry, but we’ll do that next time, including what I consider to be its weaker points.

Denuvo and the "Death" of Piracy

Denuvo videogame DRM didn't actually kill piracy, but it did stop it for several months. Here's what we learned from that.

A novel-sized analysis of the Mass Effect series that explains where it all went wrong. Spoiler: It was long before the ending.

39 thoughts on “The Witcher 3: Hearts of Stone, Part One”