GTA might be one of the most successful, big-budget, high-tech franchises in history, but it actually began as a rather sad, cheap, and not-yet-impressive top-down 2D game.

While the screenshots might make you think the game was perhaps isometricIsometric means you’re looking down from above, but the angle is skewed so you can see the sides of things. like Diablo (one of its contemporaries) or even orthogonalLooking directly down an axis with no perspective. like Hotline Miami, the game is actually “3D” in the sense that the buildings are made of polygons and you get some parallax between the stuff on the rooftops and the more distant action on the ground. It does a good job of giving a sense of scale and speed, but it does so at the expense of visibility. You’ll often end up unable to see what you’re doing because a walkway, bridge, or rooftop ends up between your character and the camera.

I can't see myself (or what's in front of me) because I'm driving under a bridge. Top-down views do not mix well with multi-layered environments.

The game is played from a bird’s-eye view, and you run around a sprawling city and shoot things. From this you might assume it’s some kind of twin-stick shooter, but alas it’s not. Maybe aiming is based on using the mouse? Nope. Auto-target? Pfft. You wish. The game is actually built around tank-style steering controls, even when you’re navigating the city on foot. The turning speed manages to be simultaneously frustratingly slow yet unplayably fast. If a foe gets behind you then you’re screwed because you’ll be dead long before you can pivot your character all the way around to shoot back. If a foe is in front of you then you’ll discover the turn speed is too jumpy to actually line up a shot. You’ll be shooting ten degrees to the right of your foe, and then after the slightest tap on the arrow key you’ll have rotated to shooting five degrees to the left. Meanwhile, the AI doesn’t have much of a problem aiming. There’s a trick you can do where you backpedal and lead enemies into your stream of bullets. Once you discover this, the game goes from “impossible” to “boring and repetitive”. At no point do you really get to feel like you’re mastering the systems of a game. It’s just an unfair game with an exploit that enables you to win.

The car controls aren’t much better. It’s hard to just stay in a given lane. Since you’re probably steering with a keyboard, you can’t make fine-tune course corrections. Every input results in an abrupt jerk of the steering wheel in one direction or the other. Things get worse once you get up to speed. (Like in a high-speed chase, which is obviously a big part of the game.) The camera will only allow you to see so much of the road ahead of you, and above a certain speed you just can’t see far enough to make corrections. Sooner or later you’re going to slam into an obstacle that you couldn’t see coming. 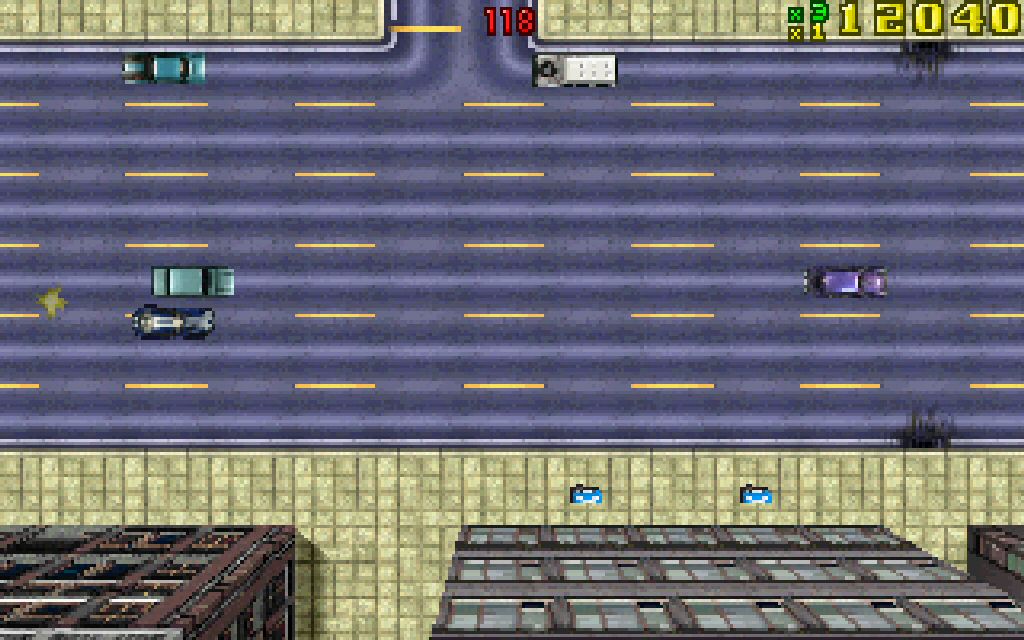 The visuals weren’t particularly special either. GTA came out in 1997, the same year as Quake II, Jedi Knight, and Tomb Raider 2. This was a year after Duke Nukem 3D. Gaming was moving into glorious 3D, and this thing looked and felt like a bit of a throwback. If we want to compare it to contemporary 2D games we have Curse of Monkey Island and Oddworld: Abe’s Oddysee, both of which had dramatically more impressive art. Even if we compare it to other top-down titles, it still comes up short. Dungeon Keeper was top-down, and it feels like it’s an entire graphics generation ahead of GTAThe lighting and particle effects help, as does the novelty first-person view..

I’m not trying to dump on this game or suggest it was some garbage shovelware title. I’m just saying it wasn’t (yet) anything special in terms of technology.

There’s no real story. No leveling mechanics. The menu allowed you to choose a character portrait, but they all look basically the same in-game and they don’t have any stats or bonuses to differentiate them.

The game feels very “arcade-y” to modern sensibilities. You walk to a pay phone and some text will pop up, directing you to a job. Maybe you need to shoot some peopleWhich would involved driving somewhere., or steal a carWhich would involve shooting some people., or pick up an item from A and bring it to BWhich would involve driving a car and shooting some people.. If you’re successful, then your score multiplier will go up. If you get busted, your score multiplier will get cut in half. Your goal is to continue to rack up points so you can unlock the next in-game city. There’s no real save system, which forces you to complete a city in a single game session. The game remembers which cities you’ve unlocked, but nothing else. If you exit the game and come back later, your score and multiplier are reset.

The whole thing is a loud, chaotic, arcade-style game that’s fun for twenty minutes yet it forces you to play for hours if you want to make meaningful progress. It’s got brain-dead shooting mechanics, a shallow gameplay loop, unremarkable visuals, and strange, frustrating controls. This does not look like the launch of one of the greatest videogame franchises of all time. Other giants like Doom, Super Mario, or Diablo exploded onto the scene with their core attributes and identity already visible, but GTA began in a very awkward place. If it wasn’t for the later titles then GTA would probably only be remembered as an obscure 90s also-ran. 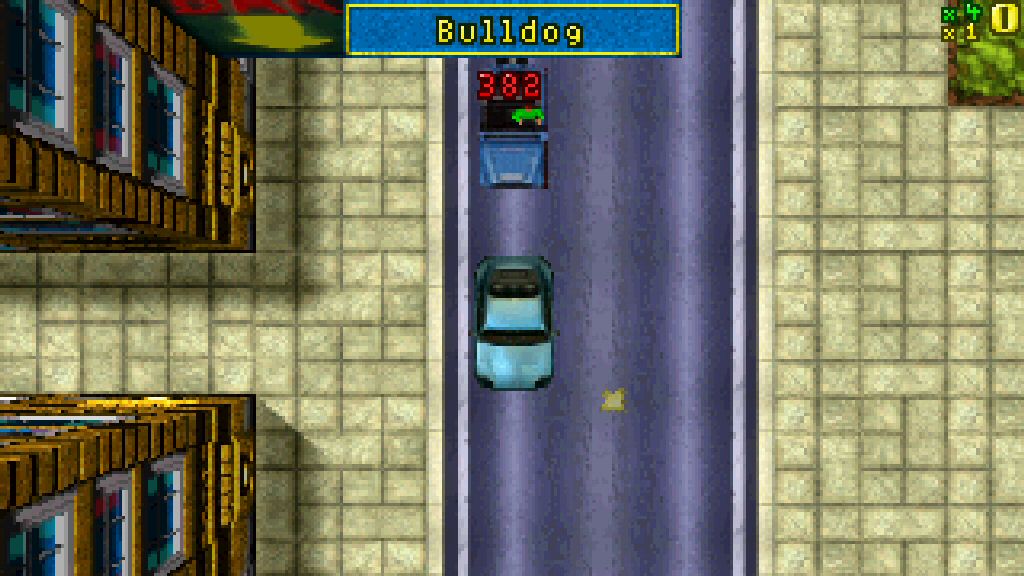 The first game showed a title card announcing the name of the car as you enter it, a feature that remains today.

But what the game had going for it was pretty remarkable. This was one of the first of the so-called “open world” gamesSure, lots of RPGs let you roam around at will. But the trick is that those games had transitions and loading screens between regions, while GTA pretends it’s simulating an entire persistent city in realtime.. GTA did for urban settings what Elite did for outer space. The world was there, just waiting for you to interact with it. Sure, you could engage with the structured parts of the game, but you could also wander around, cause trouble, and observe how the system responded.

It felt like a living city. Pedestrians milled around. Cars obeyed traffic laws. The police and fire systems responded to your shenanigans. It was a world based on rules.

While the game wasn’t actually simulating the entire city, it did an incredible job of using smoke and mirrors to make it feel like you were at the center of a detailed simulation. Behind the curtains, the game was actually only simulating the immediate area around the player. You could discover this by clogging up traffic and then going to the next intersection. When you returned to the site of the traffic jam, you’d find it had been magically cleaned up and traffic was flowing again.

The game spawns cars around intersections as you get near, and poofs them away when they go out of view. This results in the annoying situation where there wouldn’t be any cars around when you first appeared. So you end up walking some distance to find a ride. But once you do find one, the streets will be filled with traffic and you’ll have other drivers in your way, even though the place looked like a ghost town a second ago. In fact, 20 years and 15 sequels later, the game still does this. 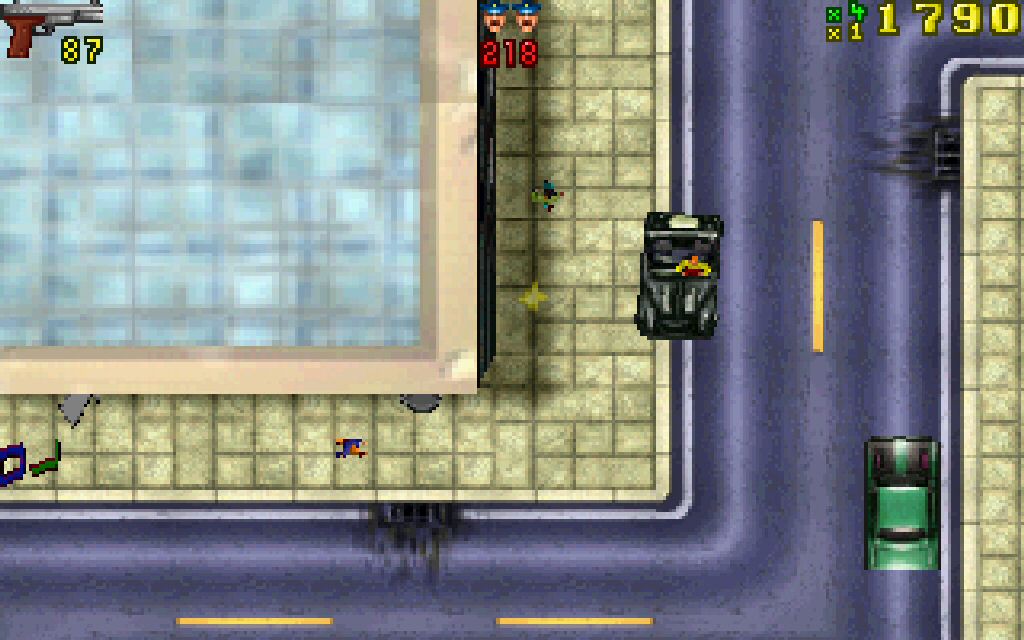 I can shoot people, punch them, or run them over. Seems obvious now, but back in the day this was a Whole New Kinda Thing.

The game was also incredibly transgressive by the standards of the day, simply because the mechanics made it possible to slaughter civilians. This sort of thing wasn’t unheard of, but it was uncommon enough to raise some eyebrows. Mortal Kombat still took the gold in the “Pay attention to me look how edgy I am!” Olympics, but Grand Theft Auto was fighting for that silver medal.

I don’t think there’s much to say about the second game. (Which was actually the fourth, but you know what I mean.) All of the other numbered sequels represented major leaps forward in technology, but GTA II was very much like its predecessor. The game added a save system and some cool lighting effects, but it was still a top-down 2D-ish open world game with odd controls and a subversive streak. At the time, it might be reasonable to assume the franchise had found its groove and this was all the game was ever going to be. We’d had four games, and they all looked and played roughly the same.

If the developer had stuck with this design then I’m sure GTA would be relegated to a historical footnote. It would be one of those odd off-brand games like Carmageddon that are remembered more for their shock value than for their gameplay.

But that’s not what happened to GTA. Instead, something impossible happened.

[1] Isometric means you’re looking down from above, but the angle is skewed so you can see the sides of things.

[2] Looking directly down an axis with no perspective.

[3] The lighting and particle effects help, as does the novelty first-person view.

[4] Which would involved driving somewhere.

[5] Which would involve shooting some people.

[6] Which would involve driving a car and shooting some people.

[7] Sure, lots of RPGs let you roam around at will. But the trick is that those games had transitions and loading screens between regions, while GTA pretends it’s simulating an entire persistent city in realtime.

Bethesda’s Launcher is Everything You Expect

From the company that brought us Fallout 76 comes a storefront / Steam competitor. It's a work of perfect awfulness. This is a monument to un-usability and anti-features.

A look at the main Borderlands games. What works, what doesn't, and where the series can go from here.