The Grand Theft Auto games have always been a big deal, but number five seems to have attained stratospheric new heights. For context, it was the #7 best selling of 2017. Not bad for a game that came out in 2013. Particularly since – as of this writing in April of 2018 – it’s still selling for the launch-day price of $60. It’s also in the top 20 highest-rated games of all time. (Although it’s below Grand Theft Auto IV, which I find mystifying. But we’ll talk about GTA IV later in this series.)

I do wonder who is buying the game at this point. Who is it that decided to buy the game in 2017 for full price that hadn’t already bought it in 2013 for full price? There’s no marketing push going on, so what’s driving these sales?

I guess I’m part of the problem. I have two copies. I got one for the Playstation 4, and another for the PC. I’ve played all the way through both versions multiple times, although for the sake of convenience all of my screenshots in this series will come from the PC version.

After writing this series, I discovered that I’d lost a majority of my game footage. So I had to replay quite a bit of the game to re-create that footage. However, I’d since changed the outfits of all the characters and turned down the graphics settings for the purposes of streaming the game. So this is a heads up that a lot of the GTA V screenshots are going to be mismatched in terms of character attire / graphical quality. It’s not a big deal, but I know some people would ask about it I didn’t explain it ahead of time. 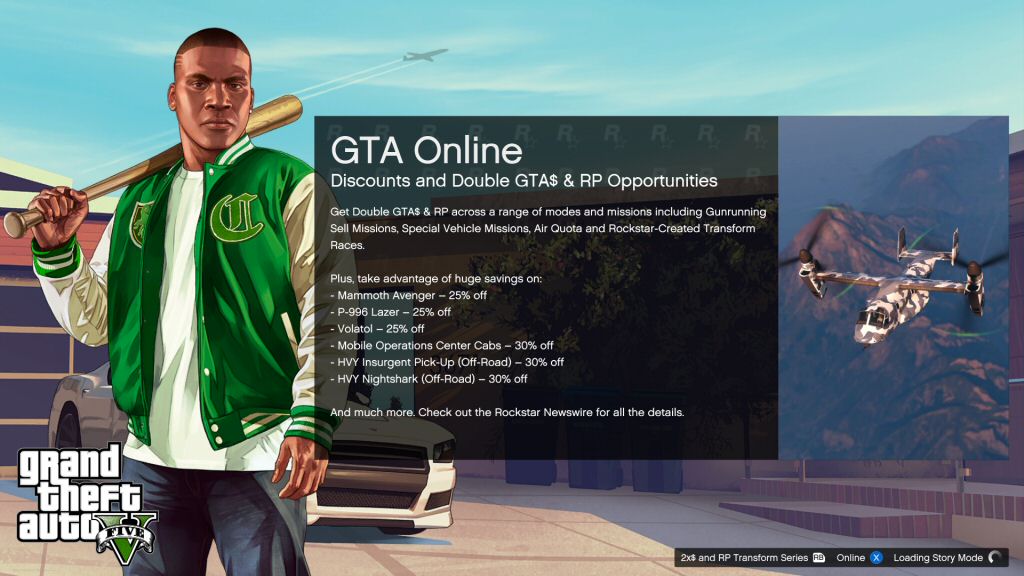 I was going to get pissed off you were selling me in-game items for real money, but then I noticed the items are ON SALE. What generosity!

I imagine the major force driving these long-tail salesAlthough, can we really call these sales “tail” if the game is still selling in the top 10? Arguably we’re still at the HEAD and we haven’t even reached the tail yet. is Grand Theft Auto Online. GTA V and GTAO are bundled together. They share the same world map and a few characters, but the two games are entirely separate in terms of progression. Completing objectives in one game doesn’t impact anything going on in the other. It’s a bit like if World of Warcraft was part of Warcraft III and you could jump between the two at will.

GTAO is a bit of an odd creature. It’s part of GTA V, but not really. It’s a massively multiplayer game, but not quite. It’s multiplayer deathmatch, but not exactly. When you launch the single-player game you’re shown a bunch of loading-screen promotional cards for stuff in GTAO, and I gather the game is based around microtransactions. I can see the financial reasoning behind this. You get people to buy the single-player game, and then nudge those people into playing online where you can shove them towards the microtransaction store. I really appreciate that the online store operates without getting involved with the single-player experience. Those of us who remember the lootbox controversies of 2017 can probably look back on the systems of Grand Theft Auto Online as “the good old days”.

I played GTAO with friends back when it was new, but I lost interest quickly. You can team up with friends to perform heists, and between those jobs you can roam around the open world and murder other players. I’m not going to cover it in this series. It’s not really my thing.

I know I’m one of the foremost graphics hipsters. I’ve been saying “good graphics” are overvalued since long before it was cool. I’ve spent years complaining that developers ought to stop trying to polish their pixels and instead pay more attention to gameplay, story, and the integration of the two. No matter how good you make those visuals, they’ll still look dated in a few years. Meanwhile, the gameplay can still be fun decades later, and stories are basically timeless. Moby Dick, Lord of the Rings, and Pride and Prejudice all continue to be cherished stories generations after they were published. Advanced graphics are nice when you can afford them, but storyNot just the “story” in terms of what happens, but also tone, dialog, themes, pacing, characters, etc. The cutscene parts. You know, “talky stuff”. and gameplay are where you can’t afford to cut corners.

But GTA V offers a pretty good rebuttal to this point of view. The story is at times tone-deaf, meandering, grating, pretentious, infantile, or derivative. The gameplay is all over the place, with the open-world design philosophy running directly against the tyrannical mission design structure. Even the gameplay elements that work in GTA V aren’t anything special, because they’ve been done better elsewhere. The only thing GTA V has to set it apart is the technology, and that’s enough to make it one of the best selling games in history.

So I guess I have to refine my position: Gameplay is paramount, and story is (depending on genre) a close second in cutscene-heavy games, but you can apparently half-ass both if you have a gargantuan budget that allows you to create a technological marvel and then hire scores of artists to fill the gameworld with more content than most players could ever hope to experience.

Or to put it another way: Don’t try this at home, kids. The developers at Rockstar are trained professionals. Also they’re rich enough that they can afford to take these kinds of chances. Also they’re probably a little crazy. Unless you’re Rockstar-rich and Rockstar-crazy, then you still need to make sure your gameplay feels good and your story doesn’t get in the way.

This game has more unique strip-mall stores than most other games have LEVELS.

On one hand, I love having a giant sandbox of interconnected systems. There’s nothing like creating your own moments in this world, entirely apart from the machinations of the author. Maybe you’ll grab a car, drive to the beach, and watch the sun rise while you listen to your favorite in-game radio station. Maybe you’ll find a bike trail up in the mountains that leads to a secluded shack with an obscure reference or in-joke in the window. Maybe you’ll cruise town in your favorite car and suddenly realize just how scarily realistic the game seems. Not just in terms of lighting and texture detail, but in the subtle details of physics, animations, body language, and soundscape. Even if there was no plot, no story, no characters, no cutscenes, and no objectives, Grand Theft Auto V is still a world worth exploring.

I love the Saints Row series. The gameplay is vastly superior. But Saints Row isn’t going for immersion and it all feels deliberately artificial. I’ve never really just driven around the world of Saints Row for the sake of it. I’ve never gotten lost in the city looking at all the small details. Saints Row is an amusement park, and you’re usually on your way to the next rollercoaster of firearms and vehicular mayhem.

But while Grand Theft Auto V offers that sense of immersion, it’s never been particularly special as a videogame. This was really bad in the earlier entries where large chunks of the gameworld were locked behind story progress, obliging you to engage with the most un-sandboxy parts of the game to get to the rest of the sandbox. GTA V has at last abandoned this, and it allows you to explore the entire world from the start.

The Lineage of Grand Theft Auto

We've come a long way since the 2D days. Well, the GRAPHICS have, anyway.

The game is called “Grand Theft Auto Five”, but it’s actually the fifteenth(???) title in the franchiseNot counting the oddball Gameboy title.. Here is the full lineage:

The non-numbered games are typically standalone, full-featured titles. They’re just named by subtitle rather than by roman numeral. Generally, the numbered titles denote a major leap forward in graphics and content. The other titles usually rely on the same engine and assets, but feature new characters and stories.

In this series we’re going to look at GTA V. We’ll pick at the characters, the world, the mechanics, the story, and even the technology. But before we dissect GTA V, we’re going to spend the next few weeks talking about the earlier games in the series and how an odd and mediocre 2D scroller evolved into one of the most popular franchises of all time.

Obviously to figure this out we’re going to need to go back to the beginning, so that’s where we’re headed next week.

[1] Although, can we really call these sales “tail” if the game is still selling in the top 10? Arguably we’re still at the HEAD and we haven’t even reached the tail yet.

[2] Not just the “story” in terms of what happens, but also tone, dialog, themes, pacing, characters, etc. The cutscene parts. You know, “talky stuff”.

[3] Not counting the oddball Gameboy title.

Obviously they are. Right? Actually, is this another one of those sneaky hard-to-define things?

Why The Christmas Shopping Season is Worse Every Year

Everyone hates Black Friday sales. Even retailers! So why does it exist?

This is why shopping for graphics cards is so stupid and miserable.