The Witcher’s 3’s main quest is called “Collect ’em all” (to complete it, you must collect one of every Gwent card in the game) and your first opportunity to start it is by talking to traveling Oxenfurt Professor Aldert Geert at the tavern in White Orchard. He’ll give you your first Gwent deck (of the Northern Realms faction) and play you in a pretty easy match.

This probably won’t surprise you much given the playthrough’s ground rules, but I’m a Gwent man. I got less satisfaction defeating the game’s various villains than I do when I scorch the everloving bejeezus out of an overpowered monster deck. It’s the only card game to successfully make me cackle.

Now I understand that not all of you reading this are into Gwent as much as I am, so I will also spend considerable time covering the game’s various side quests, like the one where you help Ciri save the world from a magical-entropic apocalypse. And from here on in I’ll warn you when there’s a “Gwent part” coming up, so you can skip it if you’re so inclined. 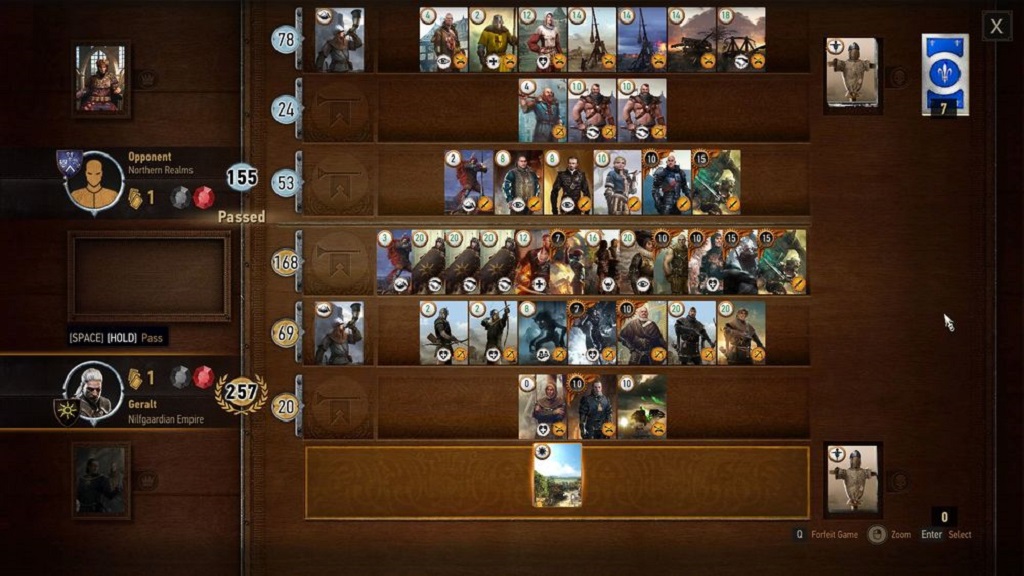 Now that's a round of Gwent.

Today’s Gwent part is gonna be pretty short, because there’s not much to say yet. Gwent is a game where you deploy cards in three rows (melee, ranged, and siege) with the aim of outscoring your opponent in two out of three rounds. The twist is that you keep the same set of cards for all three rounds, so it can be advantageous to strategically throw a round if it leaves you better cards to win the following ones. The professor gives you a barebones deck and plays you in a match that mostly serves as a tutorial.

Part of my fascination with the game comes from its audacity. CD Projekt was already in the middle of making an absurdly ambitious game, and they decided – fairly late in its development if my understanding is correct – to include a dense, elaborate, and entirely optional card game on the side just for kicks. It’s definitely a step up from dice poker. The only thing I can think of to compare it to is Final Fantasy VIII’s triple triad.

That’ll do it for today’s Gwent part, but there’ll be more to come once we can find some more worthy opponents. When I last played the game, the Gwent difficulty level option wasn’t yet in, so there may be some surprises for me in store. Not to mention I’ve barely used the new Skellige deck at all.

Back in the world where fights are won with fists instead of cards, Geralt delivers the griffin head to the Nilfgaardian captain, who reveals that Yennefer is in the nearby city of Vizima. Geralt heads back to the tavern to reunite with Vesemir and blow this popsicle stand, but then everything goes wrong. A woman, angry over the loss of a family member to the Nilfgaardians, picks a fight over the Temerian lily shield that was taken down in the last cutscene here. A bunch of drunken rowdies join in, Vesemir can’t manage to talk them down, and next thing you know there are human heads all over the floor.

I survived this fight using what has become my default White Orchard method – by running away and letting Vesemir do all the work. I do discover something encouraging: certain armed human opponents (which I haven’t fought many of yet) can be interrupted by punches. The Nilfgaardian soldiers with the big halberds no, but a drunken goon with a blackjack yes. I retreat into a chokepoint and pop the guy trying to get through with a good stiff jab every time he tries to whack me. Since I don’t have to dodge, I don’t interrupt stamina regen, and a couple Ignis later the fight is won, mostly thanks to Vesemir. By now I imagine he’s considering just cutting me out of his life. I’m sure he feels loyalty to his fellow Witchers, but at some point you have to take care of yourself.

The tavern fight scene is a good example of CD Projekt’s strengths, but also one of their weaknesses. The strength is the ability to weave the various threads of White Orchard together in a natural way, and to show how the Nilfgaardian invasion can turn everything around it into a tinderbox. The weakness, in my opinion, is that they occasionally mistake nastiness for profundity.

Yes, war is awful, and at times, so are people. But there’s a few too many scenes in this game where almost everyone involved except Geralt and his friends is just an awful lunk of a jerkface meanyhead. It’s a pattern that worries me going forward, since their next slated game is Cyberpunk 2077. Cyberpunk is not exactly the cheeriest of genres, and Mike Pondsmith’s version is no exception.

Maybe I shouldn’t worry. After all, I had a similar criticism of Game of Thrones (the show), so maybe the issue is on my end and not theirs. We’ll be returning to this observation at a couple points later in the story, so maybe just let it marinate until then. In any case, it’s time to finally meet Yennefer, and to part ways with Vesemir. 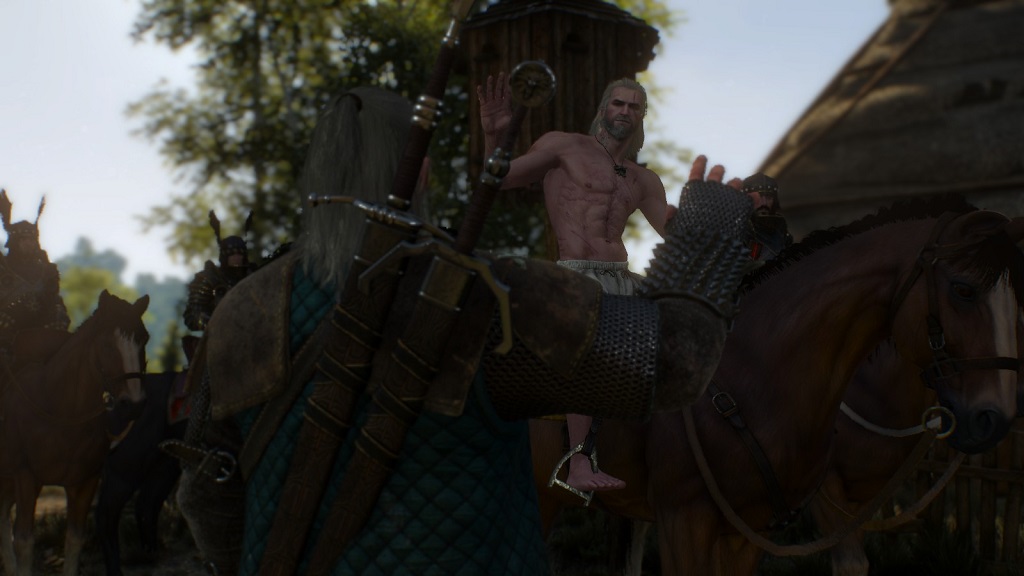 Vesemir claimed he was returning to Kaer Morhen to hide trails from the Nilfgaardians, but I think he's really doing it as an act of self-care. He must have noticed that even now, Geralt is so blasted he impaled his own foot on a stirrup.

On their way to Vizima, Yen and Geralt barely escape the Wild Hunt – the first time we see them outside of the dream sequence in the beginning – and then, once in the city, meet Nilfgaard’s Emperor. I imagine that someone new to the series might feel a bit confused at this point, with another main character and the main villain being introduced with relatively little in the way of introduction. I knew what was going on, because I’d read the books and followed the game’s promotion closely, but I can see how someone who hadn’t could be overwhelmed.

I personally think Geralt is too built in this game. The guy in this bathtub would play strong safety in the NFL, possibly even weakside linebacker. I preferred the leaner build in the second installment.

It’s not that I think he gives a bad performance. But all of my favorite voice acting performances in games have been by relative unknowns. And I can’t shake the suspicion (which I have no evidence to support) that whatever money was used to secure the big-name talent could have been better spent elsewhere.

Geralt has actually been to the palace in Vizima before, in the first game in the series, and the layout and art of the place will be recognizable to anyone who’s played it – a nice touch of continuity. And we have our next goal: find Ciri, with the help of one of the Emperor’s spies in Velen.

I couldn't not include this painting of Ciri. It's one of my favorite things in the entire game.

So now we’re off to Velen, for the start of the game proper. Until now, we’ve been at least partly on rails, and now is the time when the game finally opens up for real. Let me know in the comments if you have any preferences about what order I do things in.

Deus Ex and The Treachery of Labels

Deus Ex Mankind Divided was a clumsy, tone-deaf allegory that thought it was clever, and it managed to annoy people of all political stripes.

What was the problem with the Playstation 3 hardware and why did Sony build it that way?