Last week I covered my core “Batman rules”: The more Jim Gordon the better, Gotham is fallen, and Batman is a reluctant hero. But these are just mine. The fandom in general seems to have settled on a different set of rules, ones that I don’t necessarily hate or anything but don’t exactly love either. I’ll call these my “suspicious Batman rules.”

Suspicious Batman Rule #1: Batman can defeat anyone with _____ amount of prep time.

I get the appeal of this. On paper, the superpowerless Batman is the underdog against virtually everyone in the DC Universe. And one of the most satisfying things you can do in fiction is have the underdog win, through ingenuity, grit, and in Bruce Wayne’s case, a nearly unlimited budget.

The movie wasn't great, but they sure got the bat suit right.

So the occasional bat-whooping of one of those hoity-toity actual superheroes (or supervillains) can be fun to read. But it’s something to be indulged in moderation. Batman is a creature of Gotham, and Gotham is in the DC Universe but, to me at least, not of it. So often it even seems to exist in a different time than everywhere else, some sort of relaxed, flexible pastiche of modern day and the prohibition era.

For this reason I’m always suspicious of any kind of Batman crossover. I know enough about the comics industry to know that crossovers are a staple of their financial diet. Doesn’t mean I have to like it. The ones I do like don’t feature fighting as a centerpiece, but debates between Batman and his contemporaries about how to be a superhero properly. Green Lantern and Batman had a particularly good one in one of the “All Star” comics. 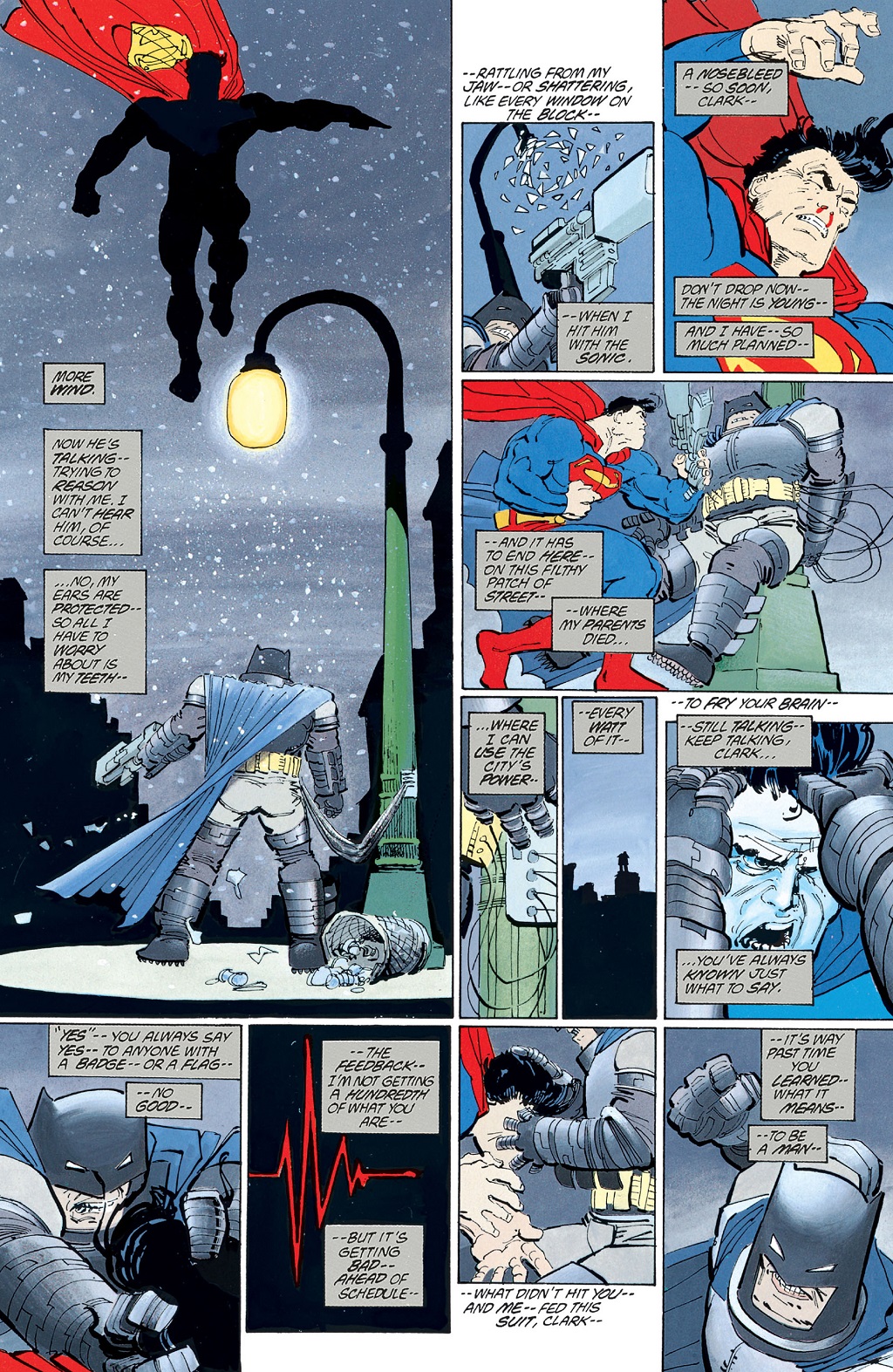 I didn't read Dark Knight Returns for a long time, because I thought the whole Batman and Superman fighting thing was dumb. Now that I've read it, I admit it's pretty good, though still not my favorite.

Writing that might make it sound like I think Batman should kill people, which I don’t. But I don’t particularly care for the no-killing rule as the character’s strictly-defined moral event horizon. For one thing, it seems to suggest that for Batman to beat people within an inch of their lives is perfectly fine, so long as he doesn’t finish them off. For another, it recenters the moral core of the character around the no-killing theme rather than the vigilante theme, which is the one I prefer.

It’s also a product of the medium moreso than the character itself, and I might as well link Shamus’ thing again so long as we’re talking about this.

The sidekick of the no-killing rule is the no-gun rule. Like above, I don’t think that Batman should carry a gun. But that’s just because he’s a superhero, and if you give a superhero a gun you basically have to turn them into one of the “gun ones,” like Cable or the Punisher. But one of my favorite bits of Batman trivia is that very early incarnations of the character actually did carry a gun, and were basically pulpy detective-types that wore spandex and a cape instead of a trenchcoat.

Also, there's no place to put a gun without ruining the silhouette.

So basically the no-gun rule is like the no-killing rule: an effect rather than a cause. It shouldn’t be overemphasized thematically.

When I was a kid watching the Adam West show, if you’d asked me to name the “highest ranked” Batman villain, I would’ve said the Riddler, because on that particular show he was the most commonly used one. There might’ve even been a brief period when Bane occupied the number one spot, having been the foe to have most thoroughly defeated Batman.

But nowadays the Joker is pretty well understood to be number one with a bullet. That’s partly because there have been so many good ones: Jack Nicholson’s is now underrated, Mark Hamill’s has always been underrated, and Heath Ledger’s is (correctly) rated very highly. Then there’s Alan Moore, who made the character about as thoroughly his own as it’s possible to do.

As good as the others were, when I read Joker dialogue, it's Mark Hamill I hear in my head.

This has the side effect of reinforcing Suspicious Batman Rule #2, since many think that the Joker’s main goal is to get Batman to kill him, thus breaking the no-killing rule. This is another thing I don’t quite buy into. Better to have the Joker’s motives always remain murky, rather than nailing him down to a specific endgame.

Either way, while the Joker may be first among equals in the rogue’s gallery, I don’t particularly like elevating him to such high status at the expense of the others.

Batman can certainly work as a dark, troubling character. Some of the very best stories have basically asked the audience, “just how nasty can this guy get before you stop rooting for him?” The Bruce Wayne side of the character has a rich vein of patrician arrogance, which the best writers have, at various times, mined for high-quality ore. There’s also potential in the contrast between young, idealistic Batman (say, Batman: Year One, which is my personal favorite comic) and older, cynical Batman (say, The Dark Knight Returns).

But you won’t, at this point, be surprised to hear me advocate for variety in all things caped and crusading. Of course, the Adam West Batman was a boy scout through and through, but you don’t have to go that far. The animated series in particular often hit a memorable note: that beneath the suit and the scowl, Batman is a big softy at heart. Finding the nobility in the character has a bonus side effect: it makes the sight of a cynical, cruel Batman that much more unsettling by comparison.

So, those are my four “Suspicious Batman Rules,” the ones the character tends to follow now that I don’t particularly like. Next week we’ll get into the rogue’s gallery, and why they’re so important to the Bat-universe.

Imagine if the original Star Wars hadn't appeared in the 1970's, but instead was pitched to studios in 2006. How would that turn out?

Did you dislike the ending to the Mass Effect trilogy? Here's my list of where it failed logically, thematically, and tonally.