Like I said on the podcast last week: I have another a game that’s reasonably close to complete in terms of programming, but in need of more content and polish if I wanted it to see commercial release. I’m not sure what the project needs or if it’s worth spending more time on, so I’m releasing this alpha version in the hopes of getting feedback.

I already had this game in development before the release of Good Robot. But then Good Robot was kind of a disappointment in terms of sales and I started thinking that maybe there were better uses of my time where I could entertain more people with less effort. So I shelved the project.

I rediscovered the project a couple of weeks ago and started thinking that I ought to at least throw it out to the public and see what people thought of it. So that’s what we’re doing. 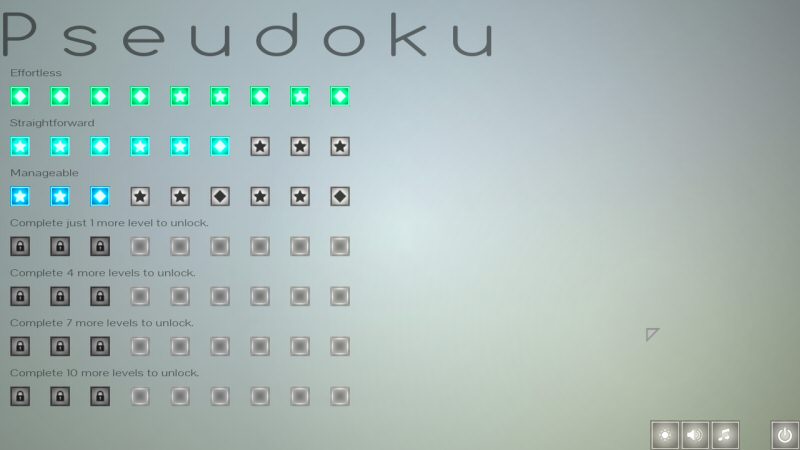 The main menu. Each square represents a puzzle.

The game is inspired by Sudoku, the pencil-and-paper game where you have to fit all of the digits 1-9 into a 9×9 grid using logic. I really enjoy the gameplay, but the newspaper version is SO 20th century. This could be a lot more convenient on the computer.

Now, there are Sudoku videogames out there. There are several free versions and I’m pretty sure there are even some that can create unlimited puzzles for you. But they all suffer from a couple of problems:

You might argue that this is a puzzle game and that “looks” shouldn’t matter. I would counter by pointing out that PopCap et al have made a pretty good case that looks do indeed matter. Imagine Bejeweled, but with a Windows 3.1 style presentation. It’s just as engaging mechanically, but it lacks all of the audio and visual stimulus that makes these kinds of games tickle the other parts of your brain.

One of the mid-tier sudoku-style puzzles. This one is played with 8 tiles instead of the usual 9.

I can’t compete artistically with classic PopCap of course. And now that they’ve been bought out by EA, I suppose PopCap can’t either. But whatever. I can at least do better than what’s out there. Give it some color, some music, some sound effects, and you’ve got something that isn’t going to be confused with math homework.

Pseudoku is intended to be an introduction to Sudoku. Rather than throwing the player into the deep end with 9×9 grids, it builds the game up from fist concepts using minimalist puzzles. For the presentation, I’m kind of aiming at something a bit like Hexcells, which was something I was really into back in 2015.

Is the game more appealing with geometric shapes, or with numerals? Would it be better on a light background or a dark one? Bah, just make it an option.

The game is designed to be played “casual style” using only the mouse. Which means instead of clicking on squares and typing in numbers, the player just clicks and drags tiles onto the board. The presentation makes a game a tiny bit easier. It highlights if you’ve got two identical symbols in the same group, and you can see how many of each symbol remain because they’re in a pile on the right side of the screen.

I don’t want to say too much more about it. I’m not going to explain how to play, since one of the goals is for the game to explain itself. 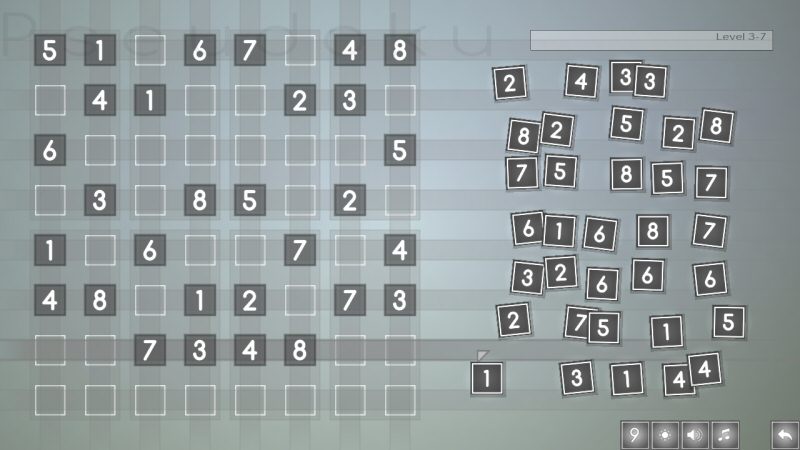 One of the mid-tier sudoku-style puzzles, which is played with 8 tiles instead of 9.

It feels like there needs to be a “next puzzle” button when you complete the current one. And it feels like there ought to be 9 tiers of 9 puzzles. And obviously I need to add multiplayer deathmatch. Other than that, I don’t know what it needs.

If you’re interested, download the game, unzip the files, and give it a try. Assuming it works, let me know how it goes. Is it fun? What’s broken? Too easy? Too hard? What annoyed you?

EDIT: Sorry, I have taken down the early builds. It turns out it’s really annoying to get bug reports and feature requests for problems that were fixed months ago.

 Object Oriented Debate Part 3: Damned if you do...Previous Post
Next PostPseudoku: Feedback to the Feedback 
From The Archives:

Why was this classic adventure game so funny in the 80's, and why did it stop being funny?