Today Heather and I celebrate 20 years of being married. For those of you who aren’t math majors: That’s two decades. A fifth of a century! It doesn’t feel like that long, of course. Because of the goofy way our brains measure time on a sliding scale, it feels like I was in school for 60% of my life and I’ve been married for 25%.

In honor of this day, I’m going to write some advice to my younger self in regards to marriage. This is stuff I wish I’d understood about 25 years ago… 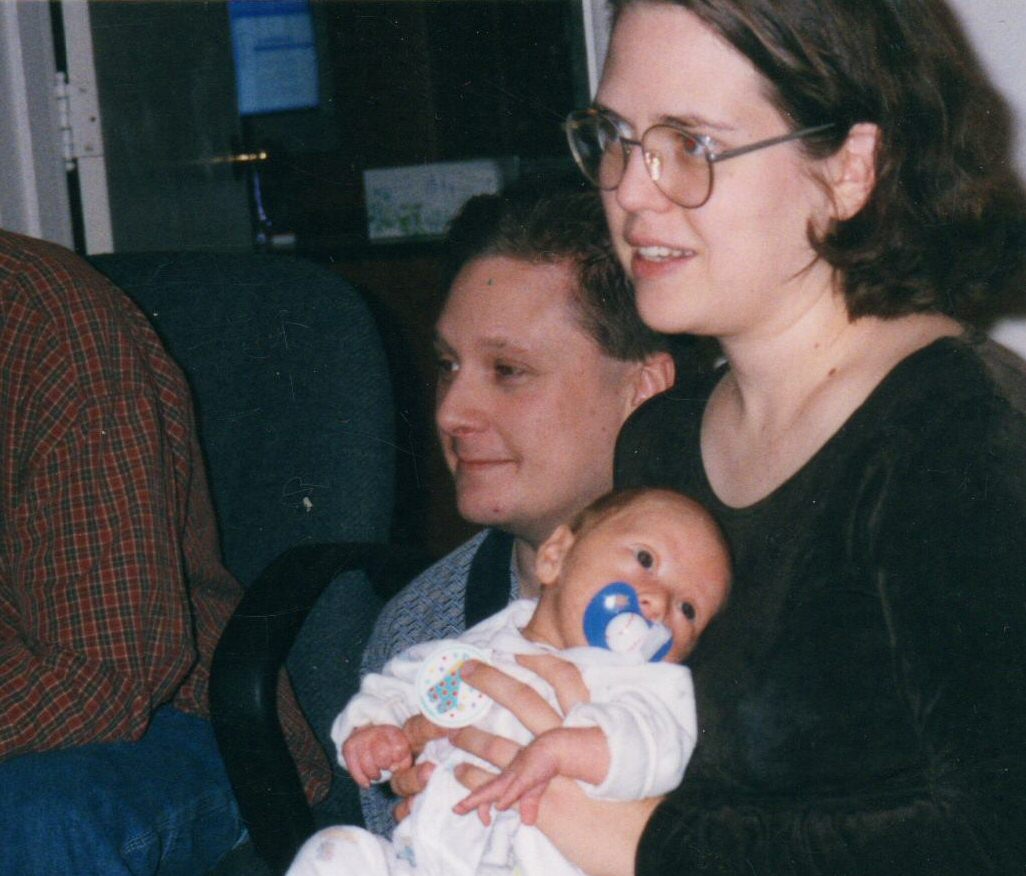 Good news! All the bad stuff people have told you about marriage is pretty much wrong. I know you have this fear that since your dad was a bad husband, you’re somehow fated to follow the same trajectory. I know you’re afraid to try, because you’d rather avoid marriage than try and fail. You’ve seen how ugly divorce can be, and so you’re not seeing what could possibly justify taking such a huge risk.

What you’re not seeing is how good marriage can be. It’s not because people are hiding it from you. It’s just that stable happy marriages are more or less invisible. “Two people have a stable relationship and are generally happy” makes for very boring entertainment, which means you’ve spent your whole life soaking in stories about defective people in defective relationships.

I know you’re a little wary because some of your friends have repeated this “statistic” to you: “For the first year of marriage, every time you have sex, put a penny in a jar. After the first year, take a penny out when you have sex. You will never empty the jar.”

Let me just point out that all of the guys who said this to you were:

These guys had no idea that they were talking about. More importantly, unless you get married at 67 years old, this idea is ludicrous. It’s true that sometimes two married people will lose interest in each other, but this is not the norm. Find someone with whom you share a mutual attraction and stay faithful to each other. Human nature is on your side. The idea that adults lose interest in sex early in life is something teenagers made up because they don’t like to imagine their parents have sex.

The other idea that’s making you nervous about marriage is the ominous statistic: “Half of all marriages end in divorce. And of the other half, a lot are unhappy.” This makes marriage sound like a game of chance where the odds are stacked against you.

Christmas 2004 From the left: Rachel, Shamus, Issac, and Esther.

It’s true that “half of all marriages” end in divorce, but it should be noted that people who are bad at marriages tend to get re-married. The point I’m making is that this statistic isn’t really measuring what counts. This statistic is misleading because it’s like saying, “Half of all alcoholic drinks are consumed by alcoholics.” It makes it sound like half the people who drink are alcoholics.

Yes it’s true that “half” of all of those marriages ended in divorce. But it’s not some random, luck-of-the-draw type thing. Some people are bad at marriage. Some people don’t like it, but they do it anyway because of societal pressure. The truth is that MOST people are going to be okay. It’s not quite as simple as my example above, mind you. There ARE people who find happiness on the second try, for example. I’m just trying to show you why the “half of all marriages fail” idea is misleading.

Marriage isn’t for everybody. But it also isn’t a mystery lottery. It doesn’t depend on luck. It depends on the people getting married. Saying “half of marriages fail” is doubly harmful. It makes Alan reluctant to try it because he thinks his odds of failure are 1 in 2. It also hurts Ernie, because he thinks if he just keeps flipping the coin he’ll end up a winner eventually. The problem is that either Ernie is a bad husband or he’s attracted to women who are bad wives. (And quite possibly both.) If he can’t solve that, then he really needs to stay away from marriage.

On one hand you’ve got people telling you – even pressuring you – to get married. They got married, it worked for them, and therefore you should do the same. On the other hand you’ve got doomsayers trying to convince you the whole thing is a rotten sham. While listening to the advice of your elders is usually a good thing, make sure you’re not letting their preferences steer your life. Don’t just get married just to satisfy the expectations of the people around you. Don’t avoid marriage because some people have a bad time of it. That’s just as silly as letting other people tell you to pursue or avoid certain careers because of how it worked out for them. You know what you want to do. You know what you’re good at.

One bit of practical advice:

The idea is that most of us REALLY feel loved when someone does one of these five things. We also have a way we sort of default to expressing love. And the two don’t always overlap.

Every troubled relationship I’ve encountered has shown some kind of breakdown in these. If you’ve got two people who began the relationship happy but gradually became unhappy, look for a breakdown in how they’re expressing love.

Maybe he’s busting his ass around the house fixing the place up for her (acts of service) and he’s constantly baffled that she never seems to appreciate it. Meanwhile she’s wondering why he never stops working on the house to talk to her (quality time) once in a while. He’s expressing love in a way that comes naturally to him, and it doesn’t mean anything to her. Maybe there’s dysfunction that cuts the other way as well, with her giving him gifts he never appreciates and him wondering if it would kill her to say something nice about his hard work (affirmation) once in a while.

But if you find yourself in a marriage where you both want to make it work but you can’t figure out why both parties are unhappy, look for some crossed wires in the way people are expressing affection.

And finally, I know you can’t picture yourself as a husband. A father. A grandfather. But those things can happen even if you can’t picture them in your head. You can’t imagine what it’s like to be old, but assuming you don’t get yourself stupidly killed it’s going to happen to you whether you’re able to imagine it or not. Back in 1909 young Gilbert Hegginbotham was a fresh-faced clueless newbie like you. He didn’t set out to become a grey-haired great-grandfather, but it happened anyway.

Let's do some scripting to make the Starcraft AI fight itself, and see how smart it is. Or isn't.

103 thoughts on “A Natural Twenty”