So the fourth DOOM game is out, which some addled marketing critter has decided should be named “DOOM”, even though that name was already taken. Sigh.

Dear Marketing: We name things so other human beings know what the shit we’re talking about when we start making mouth-noises at each other.

I guess that idea is apparently too profound for the doofus who decided to make the game sound “cooler” by leaving off the number. So for the rest of history we’re doing to have to differentiate between the two games by calling them “DOOM 1993” and “DOOM 2016”. So by leaving off a number they have obliged everyone to add another, more awkward number. And they have retroactively done the same to the original DOOM.

So thanks for that, dipshit. Also I can’t wait to see your solution when it comes time to make the fifth DOOM game and you have to decide if you want to name it DOOM 2 or DOOM 5 or just DOOM again. Or maybe DO4M? Or maybe DOOM: Rise of the Doom Raider? Or perhaps DOOM: DOOM? 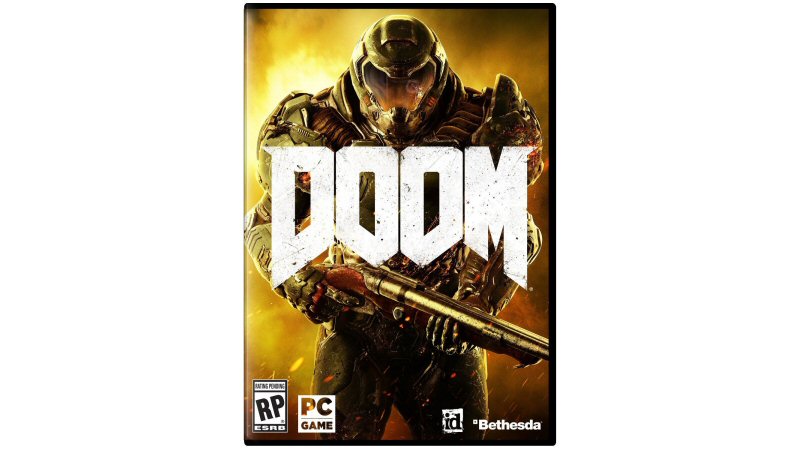 But whatever. It turns out that this complaint over the name – which, let’s be honest, is really petty – is about the only negative thing I have to say about it. Well, that and the box art, which just screams out, “This is another by-the-numbers shooter. There’s nothing here you haven’t seen before.” My point is, all my complaints are directed at the marketing department, because this game is solid fun and a worthy successor to the DOOM name.

There are a lot of mistakes they could have made, but didn’t:

The old-school 1990’s approach to shooter mechanics was built around circle-strafing: You orbit the bad guy while turning to keep them in the middle of the screen. That’s great on the PC where you have a mouse. The problem is that – just like steering a car with a mouse feels awkward – circle-strafing doesn’t feel great when using a controller. Sure, you can learn to do it. Eventually. With practice. But that sort of discomfort and frustration aren’t really what you want in a high-speed power fantasy.

On the other hand, modern games are about jumping in and out of cover, finding a good position, preventing flanking maneuvers, flushing foes out of cover, and timing your shots. That feels pretty good with thumbsticks, but it’s completely inappropriate for DOOM.

Rather than choosing between these two masters, DOOM charted out a third way that works with either control scheme and fits with the high-speed, ultra-violent tone of the original. Gameplay is focused on running forward into a foe while dealing enough damage to stagger them, then performing a gruesome melee execution. These executions cause health pickups and bullets to pop out, and are your main source of healing. After you execute your foe, you backpedal to avoid getting swarmed and the process begins again.

If the original DOOM was about making circles and modern games are about popping up and down behind cover, then this new DOOM is all about making forward thrusting motions.

I realize this may be heresy to some, but I think the thrusting actually suits the tone of DOOM better than the original gameplay. In the original, you often had to run away and scramble to find medkits if your health got low. In this game, the solution to low health is to be more aggressive. You need to get in closer and take bigger risks.

While perhaps not as large and complex as the original, DOOM 2016 is still far and away more complex than any of its contemporaries. The levels offer multiple paths through and lots of hidden secrets and details. There are simple secrets like, “Oh, you thought to look under the staircase. Good for you. Here’s a cookie.” But there are also complex secrets that take observation and experimentation to sort out.

There’s occasionally backtracking, but it’s the good kind of backtracking. You’ll return to a previous area and find it changed, or find yourself facing different foes that force you to use the space differently.

3. Nobody tried to make Doom Guy into a character. 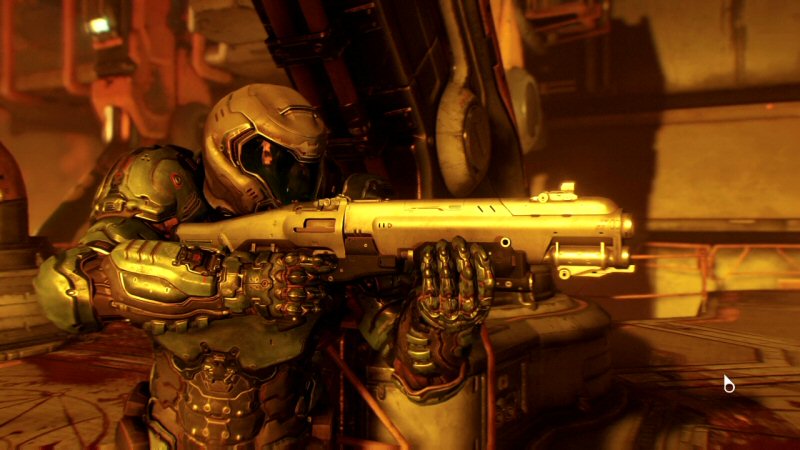 This is exactly what I want from a retro-throwback protagonist: Faceless, nameless, silent, and full of murderous intent.

“Hey, this is a modern game. I was thinking the main character should be John Ripper, and he should be voiced by Nolan North. Maybe he’s got some stubble and he wants to kill the demons to protect his family and save the earth. Maybe he’s got a reputation as a bad boy who doesn’t play by the rules. He’s got some dark thing in his past where it turns out he made a bad call and someone died and now he’s angry and haunted.”

I’m sure someone said that during the design meeting, because that asshole seems to attend every design meeting, in every company. But the DOOM team threw him out the window and stuck with the 1993 design. He’s a faceless, voiceless, nameless avatar of demon-killing. He does get a tiny bit of characterization, but it comes in the form of people reacting to his behavior.

4. Nobody expects the player to take this seriously.

This is a story about an evil corporation who builds a portal to a dimension of hell so they can harness the hell energy, which results in a portal opening up that let demons into our universe. That’s ridiculous. The characters – there are only a few – all take this business very seriously, except for the player character. It’s a bit like this:

SCIENTIST: Okay, turn off the hell filter by pressing the...

(Doom Marine proceeds to bash the shit out of the control panel, which turns off the hell filter.)

SCIENTIST: Uh. That works too. 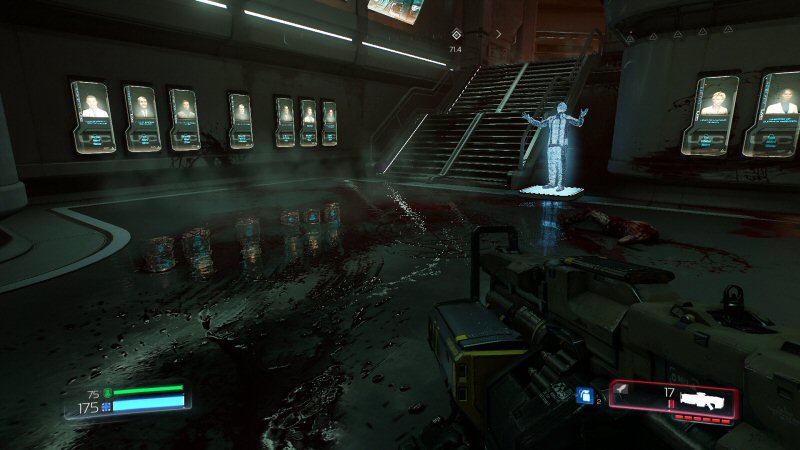 This makes me want to play viscera cleanup detail.

You get the sense that everyone thinks this bullshit is so important, but the Doom Marine doesn’t care because he just wants to kill demons. Which is exactly how the player feels. The story gives context, but it doesn’t require you to play along. There’s no moment of forced cutscene stupidity. No betrayal you can see coming a mile away. No pretentious lessons about the evils of greedy corporations. No cutscenes ever yank you out of first-person modeThis shot of the DOOM marine above is from the credit sequence, where it just shows our hero in various action poses.. People just show up long enough to explain why the next bunch of demons need their faces ripped off, and then they get out of your way and let you get to the face-ripping.

5. They didn’t put a child in charge of the color filter.

I was worried during the pre-release hype, since so much of the early footage seemed to show a world entirely of orange. But the game itself is about as colorful as the original.

First the Wolfenstein reboot was good, and now DOOM? How am I supposed to maintain my reputation as the guy who complains about everything when we keep getting stuff like this?

[1] This shot of the DOOM marine above is from the credit sequence, where it just shows our hero in various action poses.

Let's count up the ways in which Bethesda has misunderstood and misused the Fallout property.

145 thoughts on “This Dumb Industry: The Mistakes DOOM Didn’t Make”