So a few people have complained that the quests in Fallout 3 are shallow or nonsensical. Other people really dig them. Two common responses are:

Let’s look at one of these quests.

Allow me to set the stage:

Why do humans always insist we're not human? You humans are all alike.

Ghouls are humans that have been exposed to high levels of radiation, and their skin has taken on the texture of dried, sun-bleached fruit. The game continually alludes to the prejudice that ghouls are subjected to. Some people are ghoul-haters, and ghouls have a hard time making it in the world because they are so shunned by humans. The radio occasionally has public service announcements that “ghouls are people too”, which seems to be clear to everyone except the ghouls themselves. They call non-ghouls “humans” or “smoothskins”. It seems that if anyone is selling the notion that ghouls aren’t humans, it’s the ghouls themselves. I know if I lost an eye, I wouldn’t say, “What do you want, human?” to every two-eyed person who spoke to me.

Making things more complicated is the fact that some ghouls really are monsters. Some ghouls are feral, and attack non-ghouls on sight. The problem is that the game never explains what makes normal, human ghouls into feral ghouls. I don’t expect the game to take the time to clearly define ghoul physiology. In fact, it would be compelling if different people had different opinions on where feral ghouls come from and you just had to decide for yourself who was telling the truth. But the game never brings it up. You can’t ask anybody.

Look, if some guy refused to deal with an honest African-American because he was afraid the guy would suddenly transform into a drug-dealing gang-banger, then we would all agree that the guy was a prejudiced lunatic. But Fallout 3 seems to be trying to equate ghoul-hating with modern day racism, and it doesn’t fit. As presented, it’s entirely possible that normal ghouls could turn feral at some point. We don’t know. Furthermore, Ghouls have been bathed in radiation and apparently retain a pretty good charge. Reasonable humans will want to avoid living with them for that reason alone.

How dare these people continue to live here when other people DON'T live here!

Tenpenny Tower is a high-rise building in the middle of the wasteland, and is the nicest place in the game. Everyone else in the game resents the residents of Tenpenny because they’re all “rich”.

But what does that mean? Nobody in this game produces anything. Unlike in previous Fallout games, there are no farmers who eke out a miserable existence from the scorched earth. You can travel the entire wasteland in the game and not see a single farm, or garden, or anything else. (They have some cows, but it’s not clear what the cows eat.) Everyone just meanders about all day. People go to the bar at the end of the day and spend their money on booze, but the game never explains where they get their money, where their food comes from, or what they do for a living. (Or where the booze comes from, given the shortage of stills and raw materials.)

What makes the people of Tennpenny Towers “rich”? Their nice clothes? Their clean building? In that case, it’s pretty hard to feel angry at them. The rich people aren’t benefiting from ill-gotten gains from raiding, or slaves, or from cheating others. They’re just doing well. They do just as much work as everyone else in the world. (Zero.)

One the other side of the map, there is nothing wrong with the supposedly not-rich Rivet City as a place to live. They just need to sweep the floor and give the place a fresh coat of paint. Nicer clothes are plentiful and cheap – way cheaper than the guns everyone is toting around – so it’s not clear why they don’t forgo a single night of booze and use the money to replace their rags with some decent clothing.

Again, fine – the game doesn’t have to explain the economy of the game world, and it would be fine to hand-wave the whole thing, except that the game then turns around and expects us to care about this silly class envy / class warfare nonsense, and expects us to hate those eeevil rich people of Tenpenny Towers for… what? Washing their clothes? Sweeping the floor?

It’s a classic pitfall of roleplaying worlds: Don’t introduce more depth than your setting can sustain.

To be fair, the player character comes up with the stupid nonsensical solutions. To be even more fair, that's still stupid and nonsensical.

The game presents you with the following scenario:

Roy Phillips is a ghoul who wants to live in Tenpenny Towers. He’s got the money to pay for a place, but they won’t deal with him because they’re a bunch of ghoul-haters. Roy vows revenge and storms off.

Note that nobody else in the game can buy a place in Tenpenny, either. And if you kill Roy he doesn’t have any vast riches. So he’s really mad that they won’t sell him an apartment which isn’t for sale and which he doesn’t know about for money he doesn’t have.

When you go into Tenpenny Towers, you find they really do talk about ghouls as if all ghouls were feral ghouls. (Then again, perhaps Roy’s aggressive nature is evidence that he is starting to turn feral.) They really do sound like a bunch of bigots, although in the grand scheme of things they’re still nicer than a lot of the supposedly “nice” people in the wasteland that are always threatening to blow your head off over trivialities.

Worried about Roy and his threats, they commission you to kill him.

Roy lives in some subway tunnels near Tenpenny. He’s protected by an army of feral ghouls (it’s not clear how he controls them, if at all, but they recognize him as fellow ghoul and leave him alone. 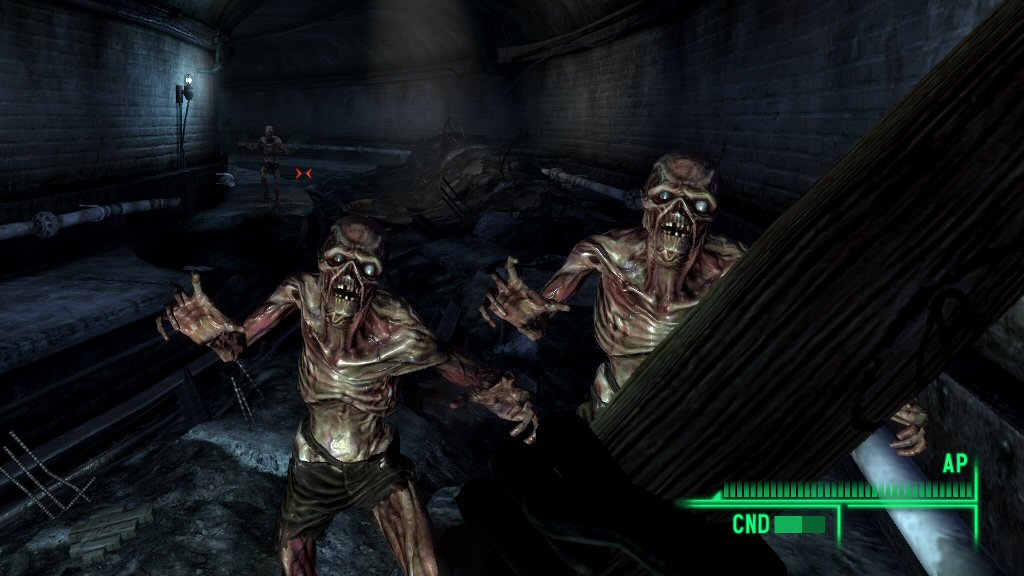 Are ghouls and feral ghouls different stages of the same condition? Or should we be using different words for these two different things? Does anyone know how this works? Has anyone tried to explain to the people of Tenpenny? Damnit game, is this a language problem, a medical problem, or a racism problem?

He plans to storm Tenpenny, kill the residents, and take over. You have three choices:

It should be noted that Roy’s hideout is actually not bad by wasteland standards. It’s clean and safe (for ghouls) and certainly better than the shacks of rusty corrugated metal that many people live in. Roy is actually pretty rich himself compared to a lot of people.

The one thing you can’t choose to do – and the thing which I think makes the most sense – is to talk Roy into some other course of action. He has a decent place to live, but it’s apparently not good enough for him, and he’s willing to murder people to get better. Roy is the problem here, and the solution should focus on him. The game would make much more sense if it also let you attempt one of the following:

I chose to defend the misguided people of Tenpenny and take out Roy, which was an evil act in the eyes of the game. The guy on the radio – the conscience of the game – even called me a “scumbag” and said I “butchered” ghouls. Apparently killing a man contemplating mass murder made me a… racist?

This isn’t just a badly written quest. This is reprehensible. According to the moral compass offered by the in-game karma system (and, one assumes, the game designers) being a rich bigot (where “rich” is simply a label the game hangs on characters without context, and “bigot” is a charge that may or may not be fair, based on how dangerous regular ghouls are to people) is worse than mass murder and theft. The people of Tenpenny weren’t oppressing Roy by taking anything from him. They were just refusing to do business with him. And since he’s clearly a bloodthirsty madman, they kind of have a point.

This is not the only quest that presumes to help us understand deep concepts like “racism is bad”. Elsewhere in the game is a den of very polite Vampires – humans that drink human blood to survive. They balk at being called “cannibals”. (Right, you’re not simple cannibals, you’re wasteful cannibals.) They seek “understanding”, from the player, despite the fact that their survival depends on a steady supply of victims to keep them alive. Once again the right/wrong karma arrow points sideways, and it’s wrong to kill them, but right to convince a nearby village to supply them with blood in exchange for being left alone. I guess it’s okay to hold a village hostage and enslave them if you’re very polite and claim to be misunderstood???

I guess if you just want to run around and shoot things then these quests are serviceable enough. But too often they’re trying to tackle grownup concepts like racism and class envy in their playschool-deep gameworld, and the result is laughable.

 Fallout 3:
The Power of the AtomPrevious Post
Next PostSilent Hill Homecoming:
Final Thoughts 
From The Archives:

This version of Silver Sable is poorly designed, horribly written, and placed in the game for all the wrong reasons.