Sorry my mic seems to be a little blown out this week. It sounded fine in my headphones, but… I don’t know. I try very hard not to fiddle with settings, positions, or volume levels during the week to avoid exactly this problem.

You can see my Favorite Keyboard Ever in the photos below.

This is roughly what you’d see with your human eyes if you came into my office:

This blurriness should be 100% blamed on my camera and not at all blamed on my ancient hands and nervous system for being unable to hold the camera still.

However, it’s a bit hard to see what’s going on here, so let me open the curtain so the camera can make sense of this: 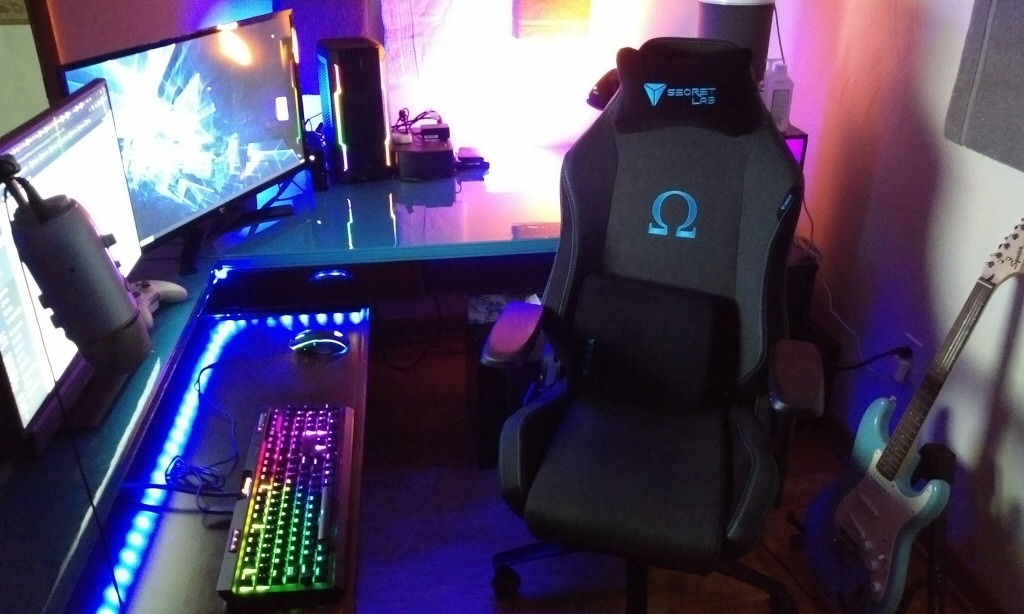 Okay, I turned off motion blur, but somehow I managed to turn on bloom lighting. Maybe I should switch to Direct X12 and enable anisotropic filtering?

I realize these kinds of chairs are SUPER-common these days, but this is my first and I’m really happy with it.

18:31 The Most Unappealing Preview Ever.

An expositional cutscene with no tension, followed by an introduction of some super-boring enemies, followed by yawn-inducing combat demo where the player spams overpowered spells rather than engaging with the combat mechanics, followed by a huge quicktime event.

It has overwhelming thumbs up on YouTube. Sigh. This is why we never have nice things.

31:25 Not Junk Mail
About twice a week I get emails from people who want to do “sponsored posts”. That’s where I let them post their garbage advertisements to my gaming blog. You know, stuff like diet pills, SEO schemes, oregano oil, and un-accredited trade schools with no web presence. Exactly the kind of content you come here for. In return, they’ll give me $50.

There are only a few templates they use and I’ve seen them all multiple times. I’ve flagged every one as spam, and Google keeps delivering them because they’re coming from a new email every time.

For contrast, my website sends me an email every single week, from the same address, letting me know the backup is done and I can download it. Every week I tell Gmail the message is legit, and every week Gmail throws up a big yellow danger sign telling me that the message looks like a scam.

Current odds of AI dominating the world: Not bloody likely.

(Unless the AI’s goal is to just annoy us. In which case it’s working really well.)
And here is the promised image from the DMV website:

In honor of the publication of Sid Meier’s Memoirs!, a book of, uh, Sid Meier’s memoirs, I must ask: do you ever read books about video games or video gaming? If so, what are some of your favorites? Mine is You, a novel about game development and the history of game development by Austin Grossman.

We talked about a few books on the show, including this one. Also, The Writer Will Do Something isn’t really a book, but it’s an amazing short-story that FEELS true if you’re frustrated with the state of AAA games these days.

Shamus when you write these long series [Jedi Fallen Order], do you get some satisfaction when you see people talking about something in the comments and you’ve already written an in-depth piece on that and it’s coming down the pipeline?

Yes, this question is a bit meta and naval-gaze-y. I knew you’d say that. Also, I said “naval” instead of “navel”. I knew you’d notice that too.

I’m playing through Outer Worlds and have noticed that it makes me feel a little claustrophobic. At first I thought it was the level design. But then I thought maybe the player height was different or the models were too big but I can’t put my finger on it. Do you have any idea why this game might feel “smaller” (even the outdoor locations feel small)?

The classic problem when designing 3D models for first-person experiences:

“Okay, I’ve measured a real-world couch, and I’ve built this 3D couch to match. Oh, but this couch makes the coffee table look like a toy. So I’ll make that bigger. Oh, but now the TV looks tiny. I can make that bigger, but now the room is way too crowded and the floor lamp is sticking inside the couch. So let me spread all these things out a little. Oh wait, I need to make the room bigger. Ugh. Now the front window looks wrong. If I fix that, then the front door will look weird.”

An hour later your boss comes in and demands to know why you built a furnished airplane hangar and he also wants to know why you’re currently measuring your trash can and suddenly you notice he looks much too large for the room and the printer looks too small and your cubicle is the size of a phone booth and you’ve lost all ability to perceive distance or proportion at any scale.

Or maybe that was just me.

What does it mean when a program crashes, and why does it happen?