Achilles: We are now, in my opinion, cooking with gas.

The Grognard: How’s that?

Achilles: Everything’s better now! For one thing, Top Hat Guy and company are all level seven and above, meaning we can actually do stuff now besides whiff attacks repeatedly and cast magic missile twice a day.

The Grognard: I would say that overall, combat is more interesting in this installment. Some high-level magic duels get downright crazy, in fact.

Achilles: I can believe it. I salivate when I read about some of these high-level spells. But it’s not just that. Everything’s… cooler. For lack of a better word. They drop you right into a big city right away this time. And instead of a generic medieval-type city, it’s a crazy Arabian Nights place.

The Grognard: The first time you hear the Waukeen’s Promenade music is the time that a playthrough really starts, if you ask me.

Achilles: And the circus tent quest. It has everything. Unique art, a cool self-contained story – and it gives you both a party member that’s a dual-class caster AND an item sets your CHA to 18, correcting the most common dump stat.

Achilles: In the first game, a typical side quest was “There’s a mage in the middle of the woods, for no reason, who summons slimes and attacks you, also for no reason. He drops a +1 dagger.” I like the new way better. 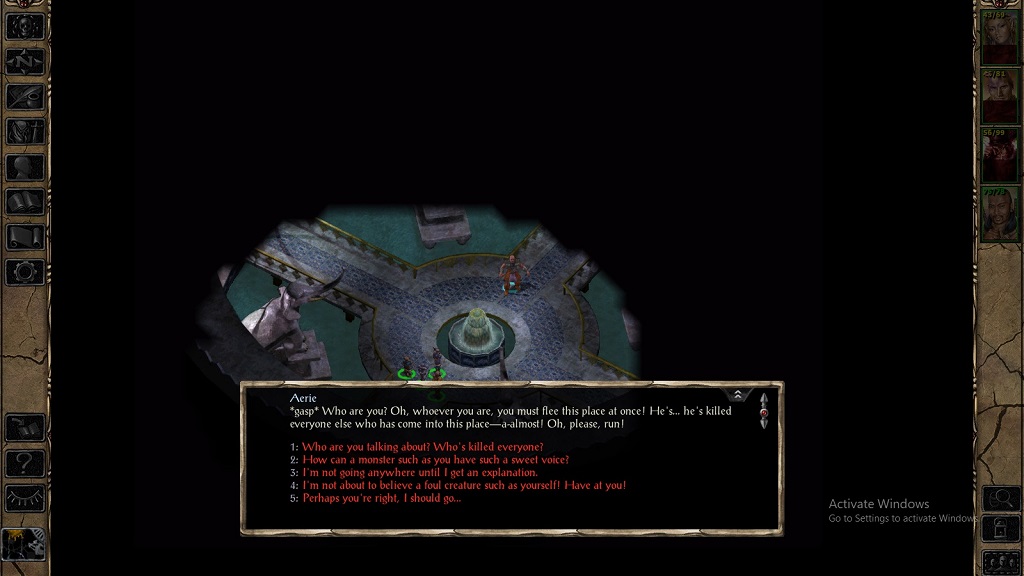 Even though I rarely choose them, I like the presence of 'I'm going to be completely obtuse about this and just attack you' dialogue choices like #4 here. Good to have options.

The Grognard: The game opens up pretty quickly after that.

Achilles: Right. There’s this guy Gaelan Bayle, whose accent swerves unpredictably between what I think was “attempted Brummie” and “Australian with a head cold.” He says he can find Imoen for me for the low, low price of 20,000 gold pieces. So it looks like I’ve got my work cut out for me.

The Grognard: This particular campaign element is a bit of a famous one. Sven Vincke, the head honcho at Larian Studios, has referenced it in interviews like this:

Vincke: It is similar to the original Baldur’s Gate, and especially in Baldur’s Gate 2 it has a really cool mechanic that I really liked and I referenced a lot throughout Divinity Original Sin to the team where it had earn I think it was 20,000 gold to be able to take a ship, that was the type of freedom that was present there which we offered in DOS and you will see in BG3.

Achilles: It’s a good trick. It gives the player freedom while also giving them a goal to work towards. Plus, the cutscene afterwards tells you that Imeon isn’t any immediate danger – her and Irenicus are both being held at this Cowled Wizards place for the time being.

The Grognard: That’s important, you think? Knowing she’s not in immediate danger?

Achilles: Definitely. This is, I assume, the “faff about doing sidequests” part of the game, which they were considerate enough to put right in the beginning. I can’t faff about properly if I’m worried something might be happening to Imoen the whole time.

The Grognard: I would agree with that. I don’t like it when a game communicates one sense of urgency through the story, but then a different one through the gameplay.

Achilles: I’ve also noticed something about the dialogue.

Achilles: There have been several times when the game has asked me, in a highly conspicuous way, whether I care more about saving Imoen or catching Irenicus. Dialogue options where I have to pick one or the other.

The Grognard: How have you answered?

Achilles: Well, I want both, obviously. But I had to chose I guess I would choose saving Imoen. I mean, she was my go-to lockpicker and trap disarmer for most of the last game. And Minsc is right, the mage could be leering evilly at her even now!

The Grognard: You said you wanted emotional stakes, didn’t you? Here they are.

Achilles: I’m not complaining. I definitely want to know what this Irenicus guy’s deal is.

The Grognard: Here’s how I would describe what you call his “deal”: Irenicus is, in my opinion, the best villain the genre has ever seen. His writing is good, he’s placed in the story properly, and they got a cracking performance from the voice actor, David Warner.

Through this Noblewoman's dialogue, the game lets you know that even after all the work you put in, there are STILL bandits robbing people in the Nashkel area. God dammit.

Achilles: So we’re gonna find out what his deal is? It has something to do with a dead wife or something.

The Grognard: We are. But consider this: this is one of those RPGs where you’re not playing a set character. You’re not Commander Shephard here, you’re Top Hat Guy, whose character and backstory are left undefined by necessity. Right?

The Grognard: In a game like this, the villain is, in effect, the main character. Or at least they’re the most important part of the story.

Achilles: Funny you should say that, because I had started to think that Imoen was the main character.

The Grognard: Imoen? No she’s not. She’s the spunky sidekick.

Achilles: But she’s who we care about, isn’t she? All the stuff that’s happened to me has happened to her too, more or less. And since I’m a blank slate that can look like anything, she’s the real protagonist – the one the audience likes and sympathizes with. She’s this game’s Alyx Vance.

The Grognard: Well, you’re not wrong. That may be a way around the old “silent protagonist” problem: give them a companion who’s an actual character, for them to feel protective towards.

Achilles: Exactly. So I’m gonna team up with this ambiguously British questgiver, raise 20,000 gold pieces, and prepare for a righteous swoop-in-and-rescue-Imoen operation. This guy Gaelan has given me a bunch of promising leads. Sound like a plan?

 The Outer Worlds: We Should Do More Of ThisPrevious Post
Next PostGrand Theft Auto V: Survive The Hunt 
From The Archives:

What does it mean when a program crashes, and why does it happen?

Do you like electronic music? Do you like free stuff? Are you okay with amateur music from someone who's learning? Yes? Because that's what this is.

32 thoughts on “Achilles and The Grognard: Athkatla, City of Coin”