Okay, 2016 is over already so let’s not draw this out any more. I hate long goodbyes. Here are my favorites: 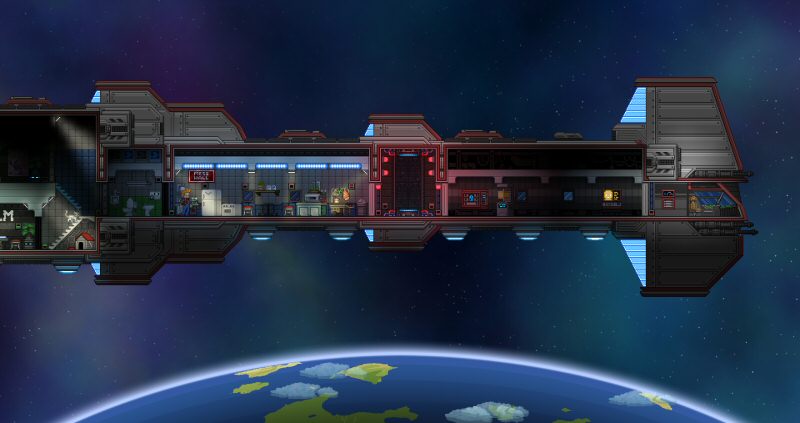 This was a charming little surprise. Originally I played this to hold me over until No Man’s Sky came out. Then I came back to it for comfort after No Man’s Sky disappointed.

The Game Terraria asks, “What if Minecraft, but 2D?”

Starbound asks, “What if Terraria, but No Man’s Sky?”

(This was before No Man’s Sky came out, mind you. So we were comparing it to the imaginary pre-release NMS we were hoping for, not the buggy post-release frustration engine.)

In Starbound you get a little spaceship and you can hop from one procedurally generated 2D world to the next. Dig down, get resources, and use those to upgrade your ship to go to more dangerous places with better resources. There are more planets and stars than one person could ever visit. Even better, the galaxy is shared across all of your characters. So if you like you can construct a single base that all of your characters can visit.

Eventually you get swept up in a plot to save the galaxy from some Sephiroth-looking doofus. I played through it for the sake of checking things off my to-do list, but none of it connected with me. For me the charm was in the exploration, upgrades, and creative building.

PUNCH DEMONS IN THE FACE!

The original Doom was about strafing and mouse-aiming. If you blindly tried to copy that, you’d end up with something that feels clunky on a modern console setup.

The last time they tried to modernize Doom they did so by changing genres, turning this game of chaotic violence and massive crowds into a game of quasi-horror peek-a-boo with one or two enemies at a time. I still maintain that Doom3 was an okay game. (Notwithstanding the monster closets.) But the point stands that it didn’t really feel like Doom.

But the Doom reboot figured out how to take the mobility and empowerment of the original and recreate it using new mechanics. And it worked. On top of this, they managed to make a story that didn’t waste your time and was occasionally worth a chuckle.

The writer has confused "shades of grey" with "muddled and contradictory", and the result is that none of their heavy-handed imagery works.

This game played controversy for profundity and the result was shallow and irritating. The black-and-white morality undercut the usual shades of grey you expect from cyberpunk and ran directly counter to the tone of conspiracy and paranoia this franchise was originally built on.

All of that is a shame, but it doesn’t change the fact that under the clumsy allegory and heavy-handed moralizing is a solid game. The characters are genuine, if a bit safe. The scenery is spectacular. The gunplay and stealth are solid. The upgrade path is more varied and interesting than last time around.

Having said that, I get the sense that this game is a bit of a bottle rocket: A temporary bright flash, quickly forgotten. I really liked Tomb Raider in 2013, but it hasn’t aged well for me. I looked back on my 2013 write-up and was surprised to see I’d given the game the #2 spot. Some of my other 2013 picks included Saints Row IV, Don’t Starve, and Kerbal Space Program. I’ve returned to those games since then and continued to enjoy them. But the charm of Tomb Raider faded quickly and I have no desire to play it again.

I’m curious if the same will happen to Deus Ex: Mankind Divided. I’m writing this question for my own benefit as much as yours. I know I’ll read this at the end of 2017, and I’m curious if I’ll experience the same bottle rocket effect. The gameplay is fun, but the characters have no emotional punch and the story has nothing to say.

I love how the story is brief, simple, and not at all required to understand your missions.

I am on the record as hating Hitman: Absolution, the previous game in this franchise. If I were to make a “most hated games list”, Absolution would certainly be on it. It’s bad enough to make a terrible game, but it’s worse still to make a terrible game out of one that used to be excellentEr. Not all the time. But when Hitman is good it’s a kind of good you can’t get anywhere else. and unique. And it’s unforgivable to take an interesting game and turn it into a boring linear mess in order to tell a shockingly idiotic story that nobody asked for. And now I’m angry again. Dangit.

I thought this was it for the franchise. When a series takes a dramatic turn like this it's usually a sign that the company culture has shifted. Maybe new creative people are in charge, or budgets have been drastically cut, or the property has been given to an entirely new developer, or corporate is pushing the creative people to make the product more “mainstream”. In any case, this is usually a one-way transformation. Maybe if the backlash is big enough the next game will walk back a few of the changes while stubbornly clinging to their new vision, but I can't think of a franchise that's tanked this hard and later returned to its former glory.

But developer IO Interactive did it. This is the most fun I’ve ever had with a Hitman game. The mission areas are simply gigantic, and every corner is filled with possibilities. Even on my tenth run through the Sapienza mission I was still finding new tricks and new ways to complete goals.

The game is not perfect. The online bullshit is… bullshit. The elusive targets mode sounds fun, but in reality they’re just making new Hitman missions and then deleting them a week later so they can never be played again. Your unlocks are tied to the server for no damn reason, which means you can’t unlock things if you’re playing offline.

Still, they saved a franchise. That doesn’t happen often. 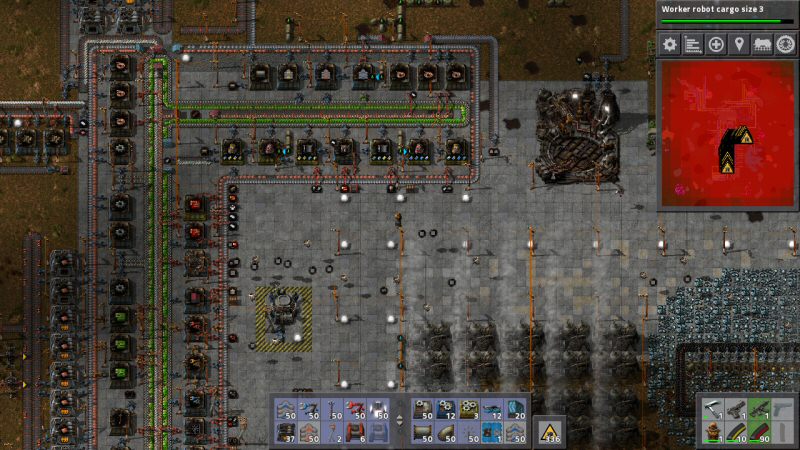 This is a hard game to show off in screenshots. Anything zoomed in enough to show you the machines is going to leave out the some of overwhelming scale. And a shot showing off the scale will show all the machines as inscrutable little blobs of pixels.

I hesitated to put this at the top of my list, simply because it’s not a game for everyone. Also it’s still in early access. And its appeal is strange and hard to explain. And I don’t think it’s going to have the big impact or cultural penetration on the level of indie darlings like Kerbal Space Program, Terraria, Spelunky, or Minecraft. And it’s not on anyone else’s list. But if this end-of-year list means anything, it’s a list of what I found interesting, fun, engrossing, or novel in 2016. And for me, Factorio is all of those things.

Factorio is a game about automation. You build mining hardware to extract resources, machines to refine it, conveyor belts to carry the resources to factories where they are turned into parts, which are then carried to other factories and turned into machines. Turrets to keep the riff-raff out and robots repair damage. You build vehicles and weapons so you can push out into the wilderness and reach more concentrations of resources. You build machines to build more machines to automate the process on an ever grander scale, until you’re inhabiting a small city devoted to sustaining and expanding itself. At the end of a long tech tree and many hours of building, your final challenge is to construct a rocket and launch it into space.

It’s been ages since I had a game completely devour my attention like this. It’s not a game for everyone. It’s probably not even for most people. There’s no story, no backstory, no characters, and no dialog. Your character doesn’t have a name. Neither does the world you inhabit. This is a world without proper nouns. You don’t play as a hero or a villain. It’s a world where your avatar has about the same function and personality as a mouse pointer. 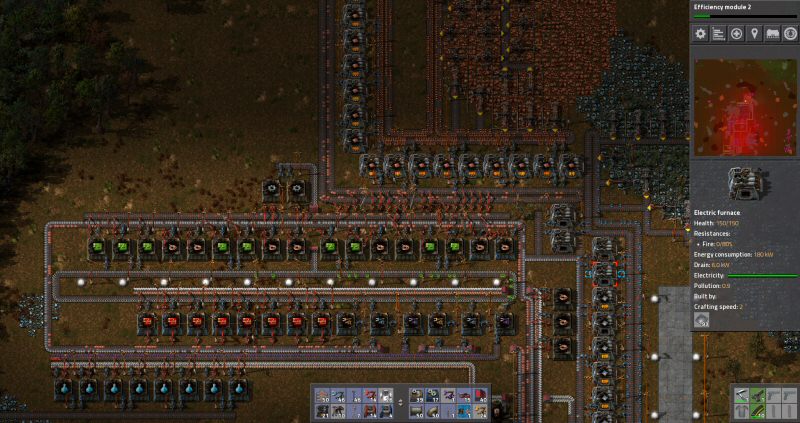 I realize this probably doesn't LOOK fun. But I don't know how to take a screenshot of my desire to forego sleep in favor of playing more Factorio.

This is a title aimed at a very specific sort of person. But if you’re lucky enough to be one of those few weirdos, then this game is going to scratch your inexplicable itch like nothing else. Every time I thought I was done with the game and I’d built the best base I could, I’d get a new idea. Or someone would suggest something I hadn’t thought of before. Or I’d see some screenshots of a base built in ways that had never occurred to me. And then I’d start a whole new game to see how it worked.

On top of all of this is the fun of reading the Dev Blog, which updates every Friday with an essay from one of the team members. They talk about future plans, coding challenges, art problems, or why features have been changed. They discuss future plans, show off upcoming features, or explain why the “simple solution” the community is asking for is actually not at all simple and probably not what people want. It’s part of an open dialog the devs have with the community. It’s fun to read and I think it’s making for a better game.

[1] Er. Not all the time. But when Hitman is good it’s a kind of good you can’t get anywhere else.